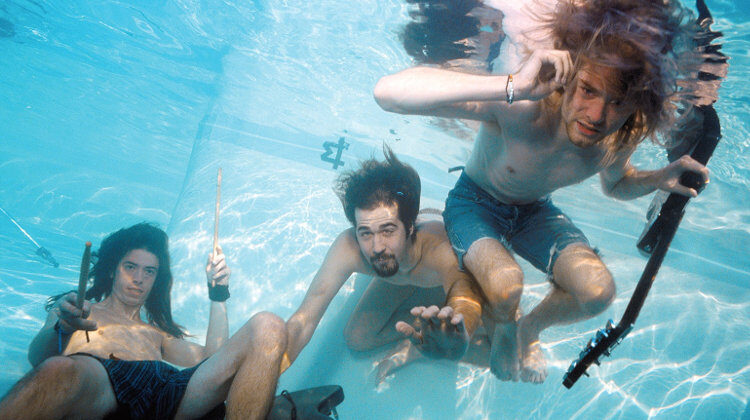 As the curtains slowly close on 2020 and our staff writers look forward to 2021, Matthew Wand takes a retrospective look back thirty years to 1991, the year 90s music truly broke and the rock scene flourished.

To some, the 80s was a true shining light in music, to others it was a decade to forget. Music in the nineties is still long revered by the globe Populus, but this golden age of music did not start with the clock chiming midnight on new years eve of 1989. The hangover of the eighties lasted long into the first year of the new decade but, in 1991, the nineties stamped out its intentions with new genres emerging, regional movements getting worldwide recognition, and the underground becoming the mainstream.

The Music Slowly Reveals Itself

’91 didn’t exactly explode onto the scene but was a slow burner that gained momentum as the months rolled on. The first quarter of the year had some real gems from Dinosaur Jr, Butthole Surfers, and TAD. But the first real noteworthy release of the period came out in March in the form of R.E.M’s Out of Time album. The LP was the alternative band’s seventh outing and their first real commercial accomplishment, helped on by the hit single Losing my Religion. In Out of Time R.E.M foreshadowed how cult success could be converted to critical and commercial triumph.

Barely a month later, members of Seattle’s Soundgarden, and ex Mother Love Bone / newly formed Pearl Jam came together to release an album that Soundgarden’s Chris Cornell had written in the wake of the death of Mother Love Bone singer and his best friend, Andrew Wood. The Washington State supergroup wrote, recorded, and performed under the moniker, Temple of the Dog. Their self-titled album and context behind it hit on an emotional level, especially the lead single, Hunger Strike.

In May, a new alternative rock band, The Smashing Pumpkins, released their debut album, Gish. The Chicago outfit led by their driving force, Billy Crogan, showed a band with real potential that was soon realised. The Pumpkins were not the only band to release a memorable debut record in 1991; on top of this, you have The Farm, Blur, Cypress Hill, Alanis Morrisette, Green Day, Mr. Bungle, 2Pac, Therapy?, Seal, Hole, and Pearl Jam.

The aforementioned Mother Love Bone was set to take the music world by storm in 1990 with their debut album, Apple. Unfortunately, it all ended in tragedy with the death of their singer on the eve of the release. Fast forward a year and Pearl Jam rose for the ashes of the Seattle band. Their debut album, Ten, was released on 27th August 1991. The sound and lyrical content were a HUGE departure from MLB, in part by the surviving members not wanting to just replace Wood. The change in tone, however, was mostly down to singer and songwriter Eddie Vedder.

His vocal style and storytelling through music was the driving force behind Pearl Jam. Ten was packed with chart and radio successful tracks. Ten would go on to sell millions of copies and help make PJ the biggest selling Seattle grunge band of the 90s.

The Addition of L.A. Rock

The 17th of September saw the L.A. ‘Noisy Punk Rockers’, Hole, release their debut offering, Pretty on the Inside. Courtney Love showed the world what all the fuss was about with a snarl and a dirty guitar sound. On the same day, another Los Angeles band fighting out of Hollywood Boulevard dropped not one but two albums. Guns ‘n’ Roses, the most dangerous band in the world, returned after a 4-year absence, finally finding the time to put aside the sex, drugs and rock ‘n’ roll life to release the Use Your Illusion I & II. It was very ambitious and perhaps arrogant of them to do so. If you were to take the best 10 or 12 tracks from both, drop all the synths and keyboard, Guns ‘n’ Roses would have had one illusion that may have rivalled their debut LP, Appetite for Destruction.

This brings us to the peak of 1991. That peak came in just one day. On Tuesday 24th September 1991, three classic albums were released. Three separate bands, three different labels, three sets of hopes and dreams pinned on their new record.

The Triumph of Soundgarden

As the Seattle scene flourished around them, the first local band to sign to a major label released a monster of an album in the form of Badmotorfinger. Soundgarden returned to the top of the pile with their trademark twin guitars, odd time signatures, and the unbelievable singing voice of Chris Cornell. The ‘Garden had two line-up changes since their last release, both on the bass.

Cornell candidly would later admit the success of the band’s sound and composition going forward was due to the addition of slung low bassist “The Beast” Ben Shepherd. BMF is packed with killer riffs and steamroller songs. Tunes such as Rusty Cage, Outshined, and Jesus Christ Pose drive this juggernaut of an LP at a deliberate and methodical pace.

RHCP Show Their Worth

Meanwhile, back in L.A, producer Rick Rubin had locked himself away in an old mansion studio with a band who were hungry and determined to capture the energy and vibe they knew they had within them. The Red Hot Chili Peppers live shows were legendary, but the band and its previous producers had never been able to successfully translate that onto wax.

Now, with their new young guitarist John Frusciante bedded in with one studio album already under his belt, the Chili Peppers were ready to go. So, on that fateful day, RHCP’s released Blood Sugar Sex Magik to the masses. The 17-tracker is a behemoth of a funk-rock album. All four members are on fire, musically speaking. Give it away led the pack with its infectious bassline, imaginative guitar licks, and a raunchy vocal performance.

If Give It Away is the Yin, then the follow up of Under the Bridge is the Yang to the RHCP sound. Like many hit singles, the song should not have even existed. One night during the recording process Rick Rubin was flicking through a lyric notebook singer Anthony Kiedis had been scribbling ideas in. After reading the poem, Rubin encouraged Kiedis to sing the song to his band members. Within minutes guitarist Frusciante had a chord progression for it and the rest is history. The Success of B.S.S.M. does not lay on the shoulders of those two songs, not by any stretch. The album is pure genius, opening to closing.

Nirvana Unleashed On The World

It will come as no surprise to many of the readers that the biggest release of the month, the year, and arguably the decade was Nevermind by Nirvana. From the ringing out of intro chords to Smells like Teen Spirit until the feedback drowns out on the hidden track, Nevermind is a timeless masterpiece. You could attribute the success of Nirvana’s sophomore album to timing, the desire for a cultural shift, and MTV. But it needed a phenomenal record, an amazing band, and a songwriting genius to pull it off. Nirvana served up all three on a silver platter with a toothy grin and a wave.

Their groove has Punk sensibilities but has the growl of heavy metal and the wordsmith/vocal alchemy of Lennon and McCartney. You cannot put it all on Nirvana singer-songwriter Kurt Cobain though. The attack drumming style of Dave Grohl gave life to the songs of Cobain, while bass player Krist Novoselic stomped down the low end with precision and creativity.

In Nevermind, Nirvana perfected the quiet/loud/quiet dynamic while sticking to the verse/chorus/verse format, all captured by indie producer Butch Vig on the infamous Neve console at Sound City. ‘Teen Spirit, In Bloom, Come as You Are and Lithium were all big hits for the Aberdeen, Washington three-piece.

Ironically, of the three albums released, Nevermind had the smallest budget and the least expectation with DGC records projecting 250,000 copies sold in its lifetime as a success for them and the band. To solidify that perhaps September 1991 was the best month of albums released there were releases by Primal Scream, the Pixies, Kyuss, and Ozzy Osbourne.

Ending On A High

Closing out the year; Ugly Kid Joe, a Californian Surf Metal band released their debut EP that would go on to be the biggest selling extended play record in history. As Ugly as They Wanna Be was released on 15 October and is 25 mins of pure joy. The success of the songs and videos for Everything about you and Madman was the driving force behind the release. There is also an excellent cover of Sweet Leaf by Black Sabbath on side B and the 25-second track, Heavy Metal.

1991 was such a rich and fertile time for music. It finally lay the previous decade to rest. I could list and gush about another ten, twenty, even fifty more albums that were released this year. The magical part is music released in 1991 was not necessarily all instant hits, not making any form of chart or unit shifter impact until ’92 or beyond. But it was a year of change, a new breed that rose to challenge the norm and even put some of the old guard to the sword. Albums and songs released in this year are still spun on mainstream radio and on record players to this day, as is such the impact of a mesmerising 12 months of music.