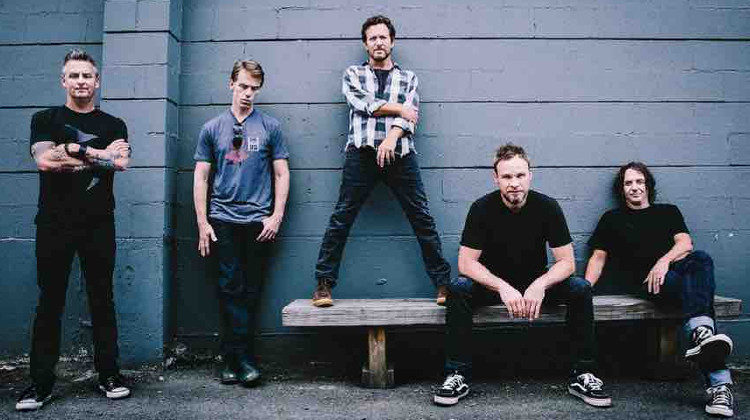 Since 1991 reluctant grunge rockers Pearl Jam have been offering their own unique take on the world around them. Their immense debut Ten catapulted the five-piece into the limelight, a spotlight in which they were happy to slowly withdraw from in subsequent releases. With a vow of no more promo videos and limited press and marketing, Pearl Jam became the purest of things: A band dedicated to making great music and touring for their army of fans, as well as themselves.

The first song to capture the imagination from Gigaton is lead single Dance of the Clairvoyants. I can see how perhaps this spin would be divisive with the PJ faithful, however. It has shades of 80’s electronica with its beat and keyboard lines, but it’s infectious and you cannot help fall for its charms. The slow groove of Seven O’clock also strikes a chord. There is a slight country undertone in its feel and a heart-warming in tone.

Second track Superblood Wolfmoon is a more up-tempo affair from the veterans. The lyrical content is exemplary by Vedder: “Yeah, I feel fortunate to be locked up” feels so poignant in these worldwide uncertain times. The sleeper song on this pressing for me is the most “alternative” track in Take the Long Way. It’s fast-paced with an odd time signature. The lines “I’ll break through the ceiling” and “I always take the long way” hit home like no other on this record. But the shining star in this track is the rabid furious guitar solo from Mr McCready.

Pearl Jam delivers Gigaton with their trademark passion. Eddie Vedder’s Gravelly but smoothly galvanised vocals are ever-present. The tone may have weathered with time but the beauty is evergreen. The bass parts by four stringer Jeff Ament is exemplary and arguably at its most imaginative since his low-end cuts on the Temple of the Dog self-titled LP. The bass is only ever as good as the rhythms though and Matt “Fucking” Cameron’s complex metronomic beats do not disappoint as the two lock in perfectly. The guitar work shared between Vedder, Stone Gossard and Mike McCready is classic in its simplicity as well as its intricacy. McCready is still heralded as one of this generation’s greatest guitarists, in my mind.

Gigaton is 12 tracks of pure genius. It’s experimental, well thought out, yet impulsive. The message and storytelling are as strong as it was when the band formed in 1990. The album is a testament to each member of the group with Pearl Jam clearly demonstrating an infinite desire to write intelligent music with intensity and, above all, integrity.