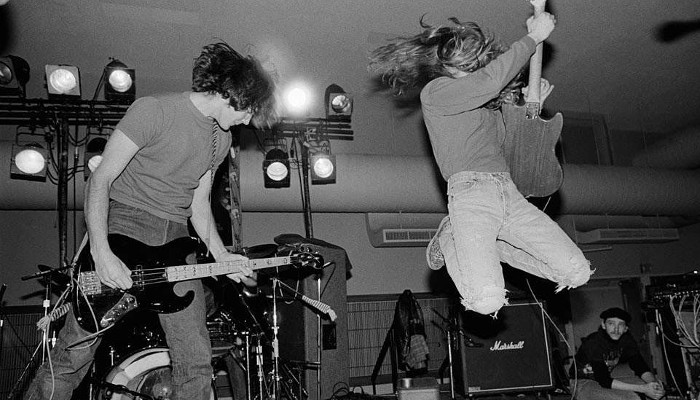 This week sees the 30th anniversary of the release of Nirvana’s debut album. Every story has a beginning and for Nirvana that was Bleach.

The Bleach LP was released on the super-hip Seattle based record label Sub-Pop in mid-June of 1989. Recorded over 30 hours by the legendary “Grunge” producer Jack Endino at Reciprocal Recordings in Seattle, Washington. The recording session was billed at $606.17. The band or the label were unable to finance this so a friend of the group, Jason Everman, paid the bill.  Everman was then subsequently handed the second guitar slot in the band. He was given credit for appearing on the album without recording a single note. The album eventually consisted of tracks from this session and an earlier Endino recording. A demo session that included THE MELVINS hard hitter Dale Crover on drums.

This Album opens with the heavily detuned and overdriven bassline intro of Blew. From the off Nirvana are making a statement. They are going to try their hardest to fit in with the muddy riff bands currently within the Sub-pop stable. Blew drives along with a slow deliberate groove and even boasts an improvised solo from Kurdt Kobain. (At this time Kurt Cobain changed the spelling of his name, to keep anonymous.)

By track three the Sub-pop formula is completely shattered with About a girl. The intro and verse are made of two lightly distorted open chords, played loosely on the guitar. The jewel in the crown of the track is the vocal melody and the lyrical content. About a girl was written about Kobain’s then-girlfriend and their shared frustrations about Kurdt’s slacker nature, unemployed status and her continual ultimatums: “But I can’t see you every night for free” melodically moans Kobain. 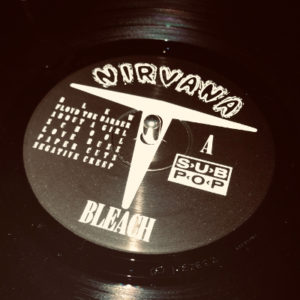 No sooner have the Aberdeen three piece broke that Grunge format that they deliver the most ‘Seattle’ sounding track on the album, School.  Kobain repeatedly insisted that music is number one and lyrics were always secondary, a rushed afterthought. But in School Kurdt tells a true story of his time as a janitor of Aberdeen High, the school he attended. Screams of “No RECESS” and the middle eight chant “You’re in High School again” leave you really feeling heartfelt for the singer.

The cover of Shocking Blues Love Buzz shines on side A of Bleach. Originally an act to appease Nirvana bassist Chris Novoselic, later known as Krist Novoselic. The song gets a punk rock overhaul and was a frequent feature in the Nirvana setlist until their untimely end.

Negative Creep’s Fast verse and chorus smash the listener in the mouth, while Kobain describes himself as a teenage stoner. The chorus line “Daddy’s little girl ain’t a girl no more” has drawn a direct comparison with Sweet young thing ain’t sweet no more by Mudhoney. Maybe subconsciously borrowed by Kobain.

Flipping to the B side, the vinyl sticks very much to earlier heavy riffs with Kobain’s words sticking in your head and thumping at your heart. Scoff takes a swipe at authority figures in Kurdt’s life with the chorus of “Gimmie back my alcohol”. The apologetic Mr. Moustache has a deeper meaning than what you see on the surface. Swap Meet is an audio depiction of the poverty and desperateness of their hometown and its population. The slow grinding Sifting highlights Kobain’s disdain for the hierarchy in his life and their lack of emotional support.

This leaves us with Big Cheese, a song directly aimed at their report label and the owners who were so eager to sign them and promised such big things. But in the end could not deliver on many of their early promises, once asking the band to finance their own single pressing. Ironically, the insistence of Nirvana wanting to sign a binding contract with Sub-pop saved the label from folding when the trio signed with a major label.

Bleach serves as a great reminder of the typical music coming out of Washington in the late ’80s. There are times where Nirvana get bogged down with the sludge and grunge of Seattle. Let’s not forget though, they are not a Seattle band. But shades of how Kurdt Kobain wanted to write and record music were bubbling to the surface.  For example, the Nevermind song Polly was written and ready for recording at this time period. But Kobain did not have the confidence or backing to put this on the record, especially alongside About A Girl. Nirvana were feeling the pressure of their peers. But ultimately, they delivered at the very least a grunge classic but at best a glimpse of their future.

Bleach is a humble beginning from which they would surely grow.

Next month we will be looking at The Prodigy’s ‘The Jilted Generation’ which turns 25.