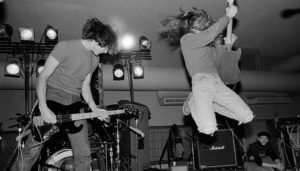 This week sees the 30th anniversary of the release of Nirvana’s debut album. Every story has a beginning and for Nirvana that was Bleach. The Bleach LP was released on the super-hip Seattle based record label Sub-Pop in mid-June of 1989. Recorded over 30 hours by the legendary “Grunge” producer Jack Endino at Reciprocal Recordings in Seattle, Washington. The recording … END_OF_DOCUMENT_TOKEN_TO_BE_REPLACED