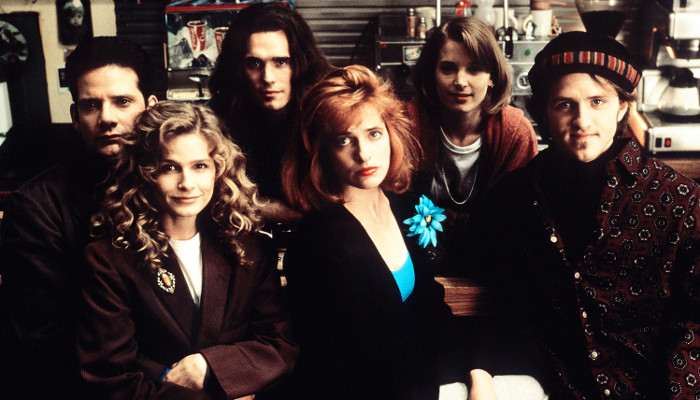 This month we look back at the Cameron Crowe romantic comedy, Singles. The movie, music and location, all point in a single direction: Grunge.

Singles started its life in 1984 as a screenplay written by Cameron Crowe based in his hometown of Phoenix.  After witnessing how the Seattle musician community closed ranks in the wake of the death of Mother Love Bone’s Andrew Wood. Crowe rewrote and relocated his story to the home of the new music movement named by the media as Grunge rock.

The film, starring Matt Dillion and Bridget Fonda is a story of a group of 20 somethings living in an apartment block and follows their minefield journey through friendships, love and relationships.

Never has a group of musicians come together like this to help add weight and authenticity to a film project. brief on-screen cameos from Chris Cornell (Soundgarden) and Tad Doyle (TAD), most of Pearl Jam making up the rest of Matt Dillion’s fictitious band, Citizen Dick and an amazing live appearance from Alice in Chains, the grunge metal band flatly refused to mime to playback in their scene. But this is just half the story. The musical contribution from the Seattle collective is unparalleled. Tracks from Pearl Jam, Soundgarden, Alice in Chains, Mudhoney, Mother Love Bone and Screaming Trees.

It’s not just Washington State natives here though, Smashing Pumpkins offer up their student radio hit Drown on a silver platter.  As well as Paul Westerberg showcasing his post Replacements work. There are also tracks from The Lovemongers and the leader of the 27 Club, Seattle Legend Jimi Hendrix.

The album opens strong with the lead track in the whole Singles musical experience, the slow grinding groove of Would? by Alice in Chains. The unmistakable rumbling bassline introduces the song with loose guitar licks and vocals from Jerry Cantrell soon to follow. Before long, Chains singer Layne Staley takes command of the lead vocals for the chorus. Not since Lennon and McCartney have two rock vocals harmonised so beautifully as Cantrell’s and Staley’s do. If a bleeding broken heart ever melodically sang out in pain, this is invariably what it would sound like.

There is no time to stop and breathe as the needle winds towards track two, an unreleased song by Pearl Jam. Breath is a classic Stone Gossard groove and lays out all that Eddie Vedder has in his arsenal.

In perhaps an uncharacteristic rock cliché, the soundtrack takes a step back and slows into a solo acoustic effort from Chris Cornell. Inspired by a fake song title from Dillions characters’ demo, Seasons. Cornell’s vocals are the centrepiece here, complemented by his guitar playing. It feels like many post-grunge bands carved out a career repeatedly emulating this one song, 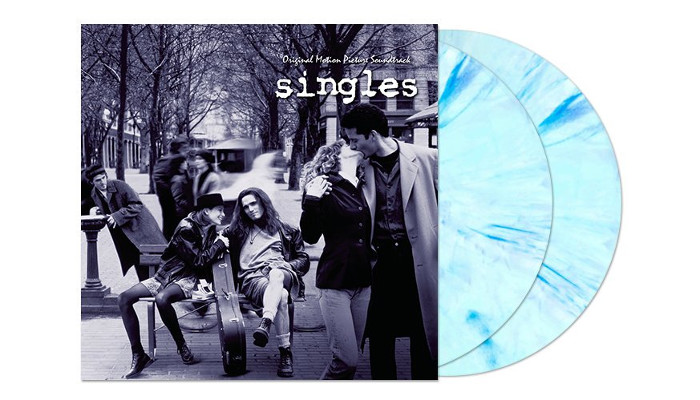 Paul Westerberg picks up the tempo and the mood in track four with Dyslexic Heart. The sing-along melodies are welcomed break from the emotionally charged Seattle sound and is the first spin on the album that sounds like a 90’s OST track

With what feels like a full-circle moment, Chloe dancer / Crown of Thorns by Mother Love Bone rings out. The singing chops from Andrew Wood are immaculate. But, it also leaves you wondering what might have been or indeed lost if Wood had not died. Would the name Eddie Vedder or Pearl Jam be anything in that reality?

Next, Soundgarden brings their unique groove metal time signature shenanigans with Birth Ritual. The heavy riff ties your head in knots and the vocals are high octane in their range.

When I think of this soundtrack, I’m brought to the very same place every time; that being State of Love and Trust by Pearl Jam. If Breath was all Stone Gossard, then ‘State’ has all the hallmarks of a Jeff Ament song. It’s more direct and with a purpose. The lyrical contribution from Eddie Vedder was inspired by watching an early cut of the movie. The words dance around the melody and talk of conflicts of the heart and mind.

Grunge legends, Mudhoney wade in now with their brand of punk rock! Mark Arm, the godfather of the Seattle scene delivers Overblown with a snarl and a sneer. Arm opens with “Everybody loves us,

everybody loves our town, that’s why I’m thinking lately, the time for leaving is now” Before declaring “It’s so overblown”. There is no hidden meaning here. Mudhoney are angered by the sudden interest in their little town of Seattle, Washington.

As the soundtrack draws to a close the penultimate track Nearly Lost You by Screaming Trees is a glorious song from the Seattle misfits. Their inclusion on the album helped put a spotlight on the Connor brothers and Mark Lanegan.

The last track on the record is Drown by Smashing Pumpkins. As I stated earlier, this was a student radio hit in America. This slow burner is perfectly composed by Billy Corgan. It instantly feels like a hit track.  Despite this, the record company stuck Drown at the bottom of the pile and ignored it, putting all its marketing muscle behind Alice in Chains Would? This irked Corgan for many years and was the stumbling block for any reissue.

The first pressing of the Single soundtrack, like many albums pressed at this time, has become a collector’s item attracting a collector’s price tag.

The Singles soundtrack was finally reissued in 2017 as a double vinyl with a bonus CD containing songs selected but not used on the original release, demos and live versions. A highlight is the Citizen Dick song, Touch Me I’m Dick. The song is essentially a variation of Mudhoney’s Touch Me I’m Sick with Eddie Vedder on vocals. But the jewel in the crown of the bonus material are four demos Chris Cornell recorded to go alongside Seasons to make up the Cliff Poncier (Matt Dillion) demo tape. One track is a little-known song called Spoon man…

Single is a heart-warming film filled with all the trials and tribulations of love and life. The soundtrack is just as soulful. It’s like a musical time capsule; it perfectly captures a time when a group of musicians lived in a place where the whole world loved their town.