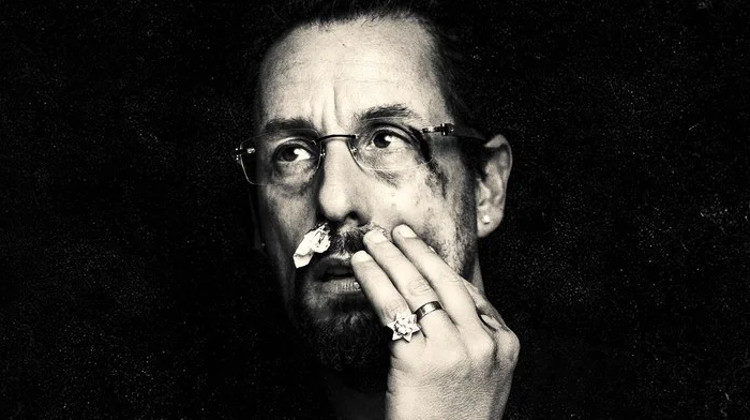 Brooklyn-based musician and composer Daniel Lopatin has never been one to shy away from a challenge. Receiving the Best Soundtrack Award at 2017s Cannes Film Festival for his work with Good Time, it was only a matter of the right project coming along before we saw him return to film compositions. The Adam Sandler starring Uncut is that film, and with the movie’s hypnotic crime thriller structure, it’s the perfect place for Lapotin to work his magic. The Safdie brothers (directors) knew that Lopatin’s visual style of composition could work wonders in bringing the movie out of its shell and the soundtrack’s impressive soundscapes and perfectly poignant instances of clarity do not disappoint.

Starting with the 8-minute-plus The Ballad of Howie Bling, the slow-building opener takes its time to set the scene amongst synthy tones, bright motions and a euphoric atmosphere. Lopatin is known for mixing electronics in operatic instances, and this is one of those cases. At times it bursts out of its shell in almost Asian-influenced sections before magical choir-esque vocals form a basis for the music to dance around. These twists and turns further develop as the track delves onwards featuring a myriad of ideas as it becomes more hectic and vibrant. A wondrous opener that shows off what Lopatin is all about.

We then have a throng of shorter pieces that help build the atmosphere amongst more electronica. Gentle and serene such as on the appealing Followed, we’re then thrust into the intriguing and dense The Bet Hits, full of tension and then, eventually, clarity.

There’s a dystopian feel at times, which is especially played out within the more dexterous, longer pieces. School Play has a haunting quality and bubbling synths that remind of Pink Floyd’s electronic work on Dark Side of the Moon. This builds into a crescendo of sound and sonic reverberations that slice through your mind and perfectly build on the high-pressure moments the film revels in. Windows calls on the power and magical sounds of African-influenced sounds as a basis for Lopatin’s ability to develop and mix world music in a way that feels completely compliant with the source material, yet making it his own. Choir-esque vocals build once more in an impressive piece that plays with your emotions on a frank and interesting level.

With only a smattering of longer tracks, it’s the shorter pieces that really need to show off their power quickly and efficiently, and most do this with aplomb. Highlights include the wildly erratic and tension-building synths and sounds of The Fountain, the vibrant and omnipresent battles on The Blade, and the subtle but mysterious ebbs and flows of Smoothie. Buzz Me Out also deserves a mention for its gentle parading of mystical vibrations and troublesome atmosphere that are a nice break from the chaos that surrounds it.

You can see why the Safdie’s wanted to work with Daniel Lopatin on Uncut Gems. The music perfectly creates its own worlds of chaos and structure, perfectly fitting in with the ethos and equally important vulnerability that the film portrays. Lopatin plays with ideas and draws influences from different parts of the world amongst immersive electronic sounds that play a part in building an atmosphere that can be heavy-handed one moment, and gentle and serene the next. Comfortable in both the long and short pieces, the conceptual feel mimics the hypnotic presence of Uncut Gems but also allows it to breathe when necessary.