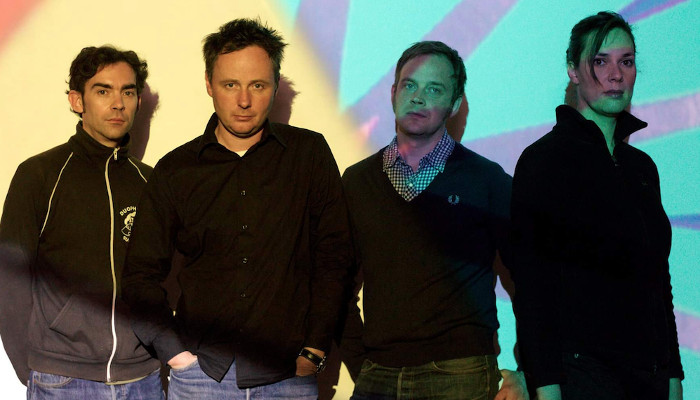 In the 1990s, the Anglo-French shape-shifters Stereolab were an intriguing and exotic musical proposition – with a healthily obsessive cult fan base – whose judicious meshing of disparate sounds failed to resonate on a deeper level beyond the appreciation of the academically minded and music journos. Almost two decades of restless and wide-eyed juxtaposition -dipping into Krautrock and post-rock, Velvet Underground, easy listening, electronica, exotica, psychedelia, bossa-nova, European cinema, French pop, Marxist lyrical sentiments and musique concrete – yielded no conventional chart hits and made little impact on a grander scale.

The long-held suspicion that they were just ahead of their time has been borne out in recent years as a wave of younger artists (Tyler, The Creator, Death By Vanilla and tonight’s support act Vanishing Twin to name but three) have paid homage to the ‘Lab’s arty, dreamy and head-spinning blend of motorik, drone, parping brass and insouciant melody, a cocktail that’s more befitting of the genre-jumping diversity and niche interests of the Spotify age. With an extensive reissue campaign underway and a significant touring schedule imminent, it’s not entirely clear if new material is in the offing or whether the band’s creative lynch-pins Laetitia Sadier and Tim Gane have put their differences aside purely for the moola.

As the Groop returned to the O2 Shepherds Bush Empire on Wednesday night, there was an indubitable frisson of anticipation in the air for an act who folded in 2009 when Sadier and Gane split. The quintet struck a congenial balance between dishing out old favourites, swaggering indie-disco staples such as French Disko and Ping Pong (the latter eliciting the most incongruous round of disco-clapping and singing-along imaginable), and pummelling through choice items from the more esoteric sections of their catalogue like The Extension Trip and Metronomic Underground.

For all their fierce situationist avant-garde credentials, jittery crate-digging and high-brow, left-field tinkerings, they could never resist the lure and swoon of the pristine pop moment, a serene balm for the ears. The lithe shimmer and loping breakbeats of Miss Modular and Brakhage, both taken from possibly their finest and most enduring recording, 1997’s Dots And Loops, sounded like precision-tooled nuggets from a time when alternative music was loosening rock’s residual grip and surging towards a beautiful, space-age future.

Sadier’s chilly dulcet croon, the troop’s contagious energy and the way in which each intricate, succulent layer of the band’s music folded over each other, made for a mesmerising evening that oozed both daring experimentation and a spirited charm.