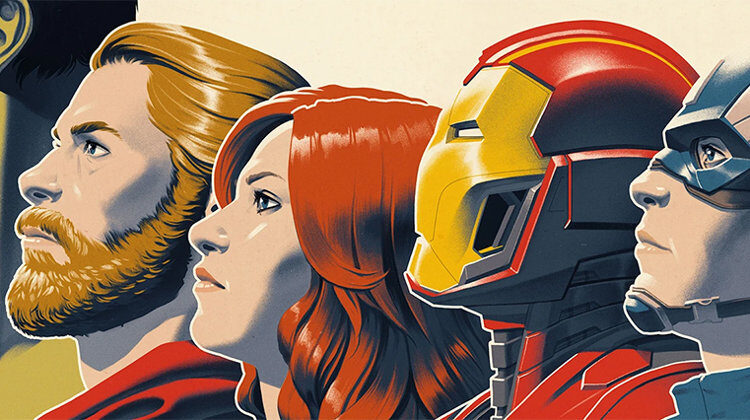 Mondo really enjoy their videogame soundtracks. We’ve previously reviewed their excellent transition of retro-gamer Skelattack onto vinyl and now it’s time for the Avengers to take on our favourite format.

Before we get down to the music score, let’s get a bit of an overview about the game itself. Released in September 2020, Marvel’s Avengers was a long-anticipated wait for fans of the franchise. Surprisingly, this was the first time in ages that a Marvel game was given such a big budget to try and really take on the video game market as a AAA title.

Square Enix were given the honours of bringing the superhero team to consoles, creating a third-person action-adventure game grand in sceptical, and featuring many of your favourite Marvel characters duking it out with the bad guys. Critically, the game itself has received mixed reviews so far, but with constant downloadable content being released, the game is growing and evolving as it becomes more epic and adds more of your favourite superheroes into the mix.

One thing, however, that they did get right from the start was the music which really comes alive on this vinyl release. Composed by Bobby Tahouri who also worked on The Rise of the Tomb Raider soundtrack, he’s really been able to show off the epic nature of the video game amidst a sweeping score befitting the superhero theme and the massive player roster gamers can choose from when playing.

Starting off with the aptly named Every Hero Has To Start Somewhere, the gentle wind and string-fuelled build-ups are perfect to gently caress you in. The sorrowful, mourning demeanor gradually builds to more uplifting, energetic sections that suddenly come alive and really make you feel like you’re listening to a big-budget epic superhero soundtrack.

There are tracks that are tailored to specific characters throughout which really helps the composer focus on traits and themes, opening up the soundtrack to another level. Our favourite Asgardian Thor gets a nod on God of Thunder as the sprawling, electrifying soundscapes twist and turn against foreboding wind instruments taking the lead. I Am Iron Man takes tips from Robert Downey Junior’s portrayal or the titular superhero, with the music confident in stride, pushed forward by a powerful drum track and even throwing in subtle hints of classic rock music rhythms, perhaps drawing from the movie universe’s Iron Man and his love of AC/DC.

The score may follow events from within the game, but this is in name only, meaning it still works perfectly as a standalone compilation. This is shown perfectly by the solitude and beauty of Some Things Haven’t Changed, a short and slow piece that builds on a menacing, string-laden atmosphere to perfection, or the more contemporary Perfect Landing building from a more electronic underbelly before once again hitting us with ebbs and flows of epic soundscapes.

Ending on It’s a Thing You Do, the track perfectly encapsulates what you’d expect from the end of a superhero movie as it provides a sense of wonder and fulfillment amongst grand, sweeping sections of multi-layered instruments ending on a sudden burst of energy. It’s as if your mission has been accomplished and the world has been saved… for now.

Housed on a 180-gram tri-color disc, it really is a lovely looking piece of wax. The artwork was cooked up by the always inventive Phantom City Creative, the front cover featuring the fists of a multitude of the game’s superheroes being thrust forward against muted colours and Captain America’s shield in the background. Inside the gatefold, we get a beautiful portrait of five of the heroes doing that superhero-y thing of looking into the distance meaningfully, ready to take on whatever evil befalls them.

If you like your superhero films and videogames, this release is one for you. Even if you don’t the music really is impressive, managing to tell a story without words as it builds from a settled beginning to a powerful middle, and on to an epic and twisting end.