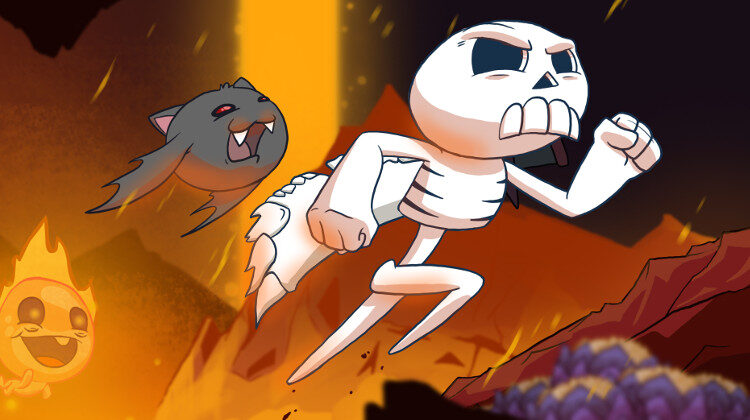 Skelattack and vinyl are a match made in heaven… or the land of the dead.

Welcome to our brand new feature that bridges the gap on special edition vinyl and intriguing crossovers that deserve a mention. This time we’re delving into one of the ever-growing collaborations between video games and vinyl. It’s a coming together that nobody would have expected (the two formats were birthed almost 100 years apart), but one that’s been growing in popularity over the years. The good people over at Mondo are a dab hand at scouting out, producing and releasing some of the most interesting collabs today, so we thought we’d check out the recently released video game soundtrack to Skelattack.

Skelattack is a game steeped in retro-gaming loveliness with an art style born in the past but using modern, graphical technology to bring it bang up-to-date. It’s a beautiful 2D platformer that looks the part and plays in a classic ‘metroidvania’ style. You play as the aptly named Skully, a newly deceased skeleton whose mission becomes defending the land of the dead against the despicable invading humans. For all you gamers out there it’s fun stuff and has received decent scores across the board if you wanted to give it a whirl.

But what really raises the game is its fantastically retro and fun soundtrack. This is what makes it such a good choice for vinyl. The limited-edition release comes housed on two 180g records and features either a black vinyl version or the extremely relevant white with grey splatter, looking as though Skully himself has been pressed directly into your record.

Composed by the talented UK-based film and game composer Jamal Green, he manages to get right into the essence of the fantastical world within the game. Bringing in influences from Danny Elfman and his work on Tim Burton movies, creeping bells and drawn out strings create a magical essence on opener Aftervale Overture before leading into plinking and vibrant sections which could have been straight out of Edward Scissorhands. It’s a perfect fit for the game and gives you the chills yet lightness that goes with the art style and atmosphere when playing.

Other musical highlights include the gently building and piano riffed arrangements of Helping the Rat King or the chaos, musical kitsch and subtlety of Warrior Battle. Path of the Dead takes things down a notch with it’s gently flowing nature that sprawls into a more layered and interesting finish whereas Serenity finishes with a call to arms of strong beats and uplifting synths that the eighties would be proud of.

The soundtrack may be aimed at fans of the game with the music reminding them of particular sections or tough boss battles, but it can also be enjoyed as a standalone record, full of strong ideas and a whimsical, cinematic quality that suits as background music.

The packaging finishes the entire product nicely with artwork from JJ Harrison perfecting the retro, hand-drawn feel of videogame box art from the eighties and nineties. The back features glossy images of the game itself with the tracklisting set in between. As technology moves on, many games can easily be forgotten. Skelattack, both the game and the soundtrack, should not be one of them. It’s retro and fun nature makes this collaboration a perfect one with Skully brought back to life on a well-tailored vinyl release.