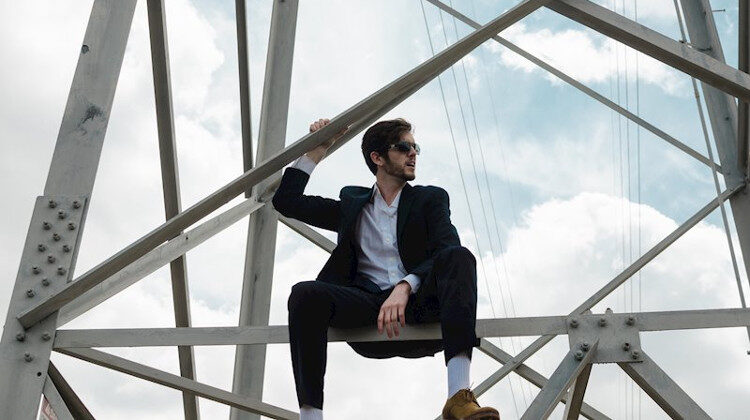 Wise John fires out a lovingly crafted mix of ballad, pop, folk and jazz on the honest and exhilarating album, A Wonderful World.

Singer-songwriter Wise John has had a tough time recently. Like most of us, he’s had a difficult year with the wide-reaching effects of the global pandemic, but on top of this, he’s also faced his own personal problems – being bed-ridden for months with s chronic illness, leaving a relationship and a self-proclaimed lack of direction and purpose. This still hasn’t stopped him creating a fantastic debut record, however, with the events of the last year giving ample material to work into the music, which he does in interesting and mesmerising ways.

Starting off as an open book that is apparent through the entire record, Won’t Somebody Let This Caged Bird Fly introduces us to Wise John’s delicate and perfectly pitched vocals as they dance on a settled piano track, creating a warm and inviting atmosphere. With flicks of jazz with the piano later allowed to wander into a solo section, it’s a beautiful opener with an introspective look at being set free. Leaving LA follows featuring a much fuller sound with multiple layers, a thumping drum track and addictive synthy flows. There are hints of Bowie and Elton John in there as it ebbs and builds into dreamy piano sections before once again hitting hard in the bright chorus. An album highlight for sure.

As we dig further into the record, it’s apparent more of Wise John’s story is unfolding as he builds his thoughts on the state of the world and how his life has been affected over the last year or so. Wonderful World is a gentle piano ballad that touches on the highs and lows of a privileged world, and how it’s something that not everyone is able to join in with ( “If it weren’t for the outside it would be a wonderful world”). The Fall of Rome takes on a more folk rock style reminding of early Tom Waits in rhythm and vocal dexterity as Wise John spouts political, poetic lyrics with guile and malice (“The fall of man coincides with the rise of machine while the dealers getting high of his American dream”). It’s a change from the slow and steady pace of the album’s start, showing off Wise John’s skill and multi-genre talent.

As we get near the end of the record, things start to slow down and ebb off, even if the lyrics stay hard and heartfelt. Me & My Piano is exactly that, a stripped-back ballad of sorrow and emotion at lost love and how music can heal. Borderline ends the record in fine fashion as Wise John flexes higher vocal pitches amongst settled beats, folky rhythms, plucking guitar and one of the strongest melodies on the album.

A Wonderful World by Wise John is a beautifully laid-out journey that should be listened to from beginning to end. The music shifts and shapes throughout to suit the wide-reaching lyrical content, with the artist happy to focus on both happy and sad times that have brought him to where he is today. This creates a record that doesn’t settle on one theme or style and makes it stronger for it.