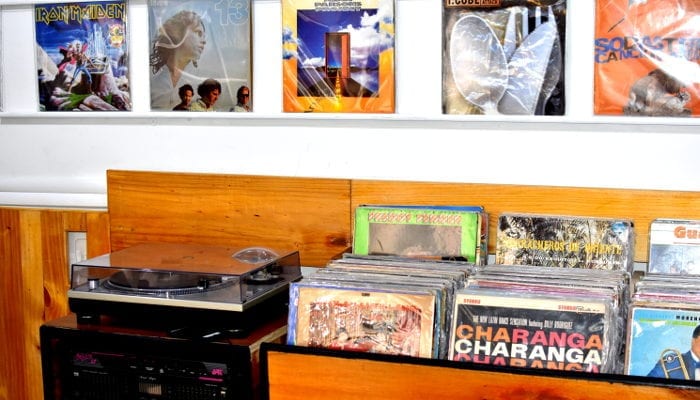 I recently booked a trip to Colombia to take in its vast heritage, beautiful sights, and exciting sounds. It was also the perfect chance to discover what the country had to offer, vinyl-wise.

With flight ticket in hand, I was off to Colombia. It might not be the first travel destination on everyone’s list, but for me, it’s a land of mystery and beauty. Many people believe it’s a dangerous place and that you should stay far away – this couldn’t be further from the truth.

In recent years, Colombia has become a travel hotspot where people can discover beautiful landscapes, talk to friendly locals, and delve into its troubled past. It’s this troubled past that puts people off, but Colombia in the present day has really turned itself around and is much safer than you’d think. A place where tourists can mix its wonderful peole who just want to forget the country’s unsettled history and have fun.

On top of discovering the country, just like my previous trip to Vietnam, I wanted to have a little look around for record shops. Obviously, enjoying the country itself was my main priority, but why not look for records in the cities I visited when I could?

I flew into a place called Medellin to begin my trip. It’s a wonderful city that can be easily navigated on its metro system, acting as a transport backbone. After doing the usual touristy stuff for the first couple of days (taking a ride on the cable car to see some wonderful views, enjoying a walking tour to find out more about the history of the city, visiting museums, and eating the local cuisine), I once again had that hankering to find out more about vinyl and the city’s music scene.

You may or may not know that Colombia is renowned for its salsa music, so I fully expected to find lots of this. So, once back in the hotel room, just like in Vietnam, I used my trusted friend ‘Google’ as a starting point to find record shops. Vietnam was pretty difficult to track down any vinyl, but I had higher expectations for Colombia due to its flagrant love of music.

I wasn’t to be disappointed, as Google kicked up a few results instantly. The first was a place called ‘Vinilo y Cafe’. I checked google maps from where I was staying and it didn’t seem too difficult to get to if I used the metro system and walked about 15 minutes. I packed my camera, put on sunscreen (I’m a typical pale Englishman), and started off for the metro. 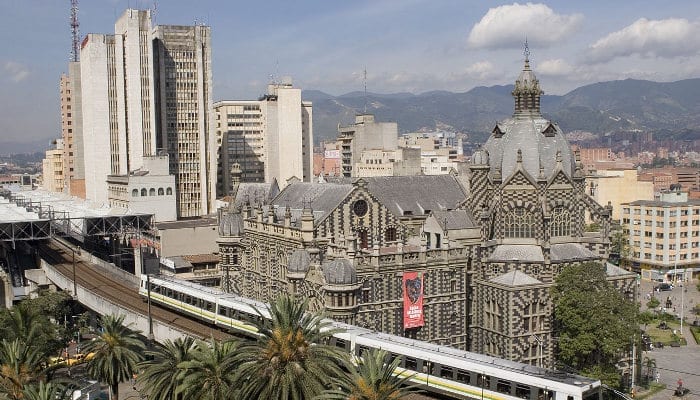 It’s surprisingly unconfusing to navigate the Colombian metro system. It’s basically two tracks that split the city into four, so it wasn’t difficult to figure out where I needed to go. Finding the record shop itself was unfortunately a different story. I spent 30 minutes looking for the place before asking a local in broken Spanish if he knew where it was. I was near where google maps said it should be, but couldn’t see it anywhere.

The local (an owner of a restaurant) didn’t really know but opened a map app on his phone to see if he could help. It soon clicked what I was looking for and he took me 20 meters down the road and pointed out where it was. I’d actually walked past it twice. How had I missed it?! It was a small opening but I’m usually good at sniffing out vinyl. Annoyed at myself but grateful to the local, I headed over to see what I would find inside.

A Vinyl Haven In Colombia

Inside was nothing like I would have expected. It was a beautifully unique venue that, although small, packed quite a punch. The walls were covered with records, posters, and vinyl-related detailing with an old jazz record being played over the speaker system. The shop was filled with the sound of piano, drums, and sax.

This was far from what I expected from Colombia (and later on would discover that this kind of record shop wasn’t the norm). Also, as the name suggests, it was a cafe. You could order anything from a coffee to a soft drink, or even a beer as you perused the records. I decided on the latter as it was fully deserved.

As I waited for my cold brew, I started looking through the crates of records. It was an eclectic mix of old and new music from all over the world. From the newest famous band releases to long-forgotten and used salsa/jazz records, it really had a good variety. It wasn’t an old dusty record shop that I’d come to expect, but a well-established venue with some great picks to choose from.

The manager/owner had been sitting in the corner, so I decided to go over and try to introduce myself. Now, my Spanish is pretty bad at best, but I’d been practicing before the trip so tried to ask her if she spoke any English… unfortunately she didn’t. I managed to explain who I was and talk about Vinyl Chapters. I asked if I could take some pictures for the website and gave her the web address so she could see what I was ‘trying’ to talk about.

I thanked her for the beer and said what a great shop she had before leaving, hoping at least some of what I’d said hadn’t been lost in translation. It must have worked because later on that evening I recevied a lovely email saying how much she loved the site. 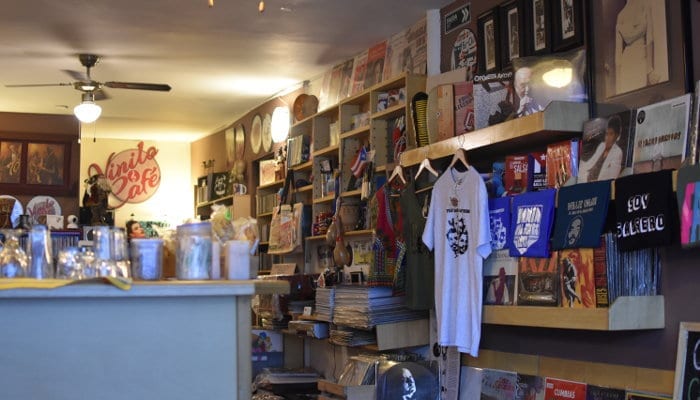 Onto The Next One

With my first success in Medellin under my belt, I already had another venue to check out that was only 20 minutes walk away. This, I found out when I arrived, was in a huge shopping mall. The place was called ‘La Música’ and wasn’t as unique as ‘vinilo y cafe’ – it was more of a general chain-store.

Nonetheless, it had a nice selection of records that I could peruse, both old and new (mainly new), but at pretty expensive prices. I tried to talk to the staff but found it much more difficult this time – probably a mix of bad Spanish and the fact they just seemed like employees who didn’t really know much about the records.

This was a little disappointing, but they allowed me to take photos, and since I’d found the fabulous first venue, I didn’t really mind too much. On this note, my vinyl search in Medellin ended, and off I went to find some fun and food in the city’s nightlife epicentre, La Poblado.

After more searching on Google, another city with a vinyl culture appeared to be, Bogota. Luckily, this was on my list of places to visit; I was due to be there in about 5 days’ time. After visiting a wonderful town called Salento – a chilled-out place with plenty of hiking and biking – I took the 8-hour bus (I know, long, but you get used to long bus rides in Colombia) to Bogota. Bogota is a city renowned for its graffiti art as much as anything else. It seemed a little rougher around the edges than Medellin, and it was. I was swiftly reminded by the owner of the hostel I was staying in that sections of the city were ‘not safe to go’, especially at night.

Once again, for the first couple of days, I took in the city and its sights, a graffiti tour, a train up to the Monserrate Church, and enjoyed the museums and food…lots and lots of food. In the next two days, the craving for a vinyl search took hold again. Google was booted up, and off I went to the area where a record shop was supposed to be located (after checking it was relatively safe, of course.)

This one was a little easier to find than ‘Vinilo y Cafe’, but I still had to head into an arcade off the street where it was supposed to be. My eyes widened as I got nearer; I spotted the shop and it was packed full to the brim with records. Called ‘Discos Vertigo’, vinyl was wall to wall, boxed on tables, and ready for digging. There was even a nice little player set up to try out any finds. It wasn’t the biggest shop, but they’d made the most of the space they had.

The manager seemed deep in conversation with some locals, and when I did try to speak, he didn’t understand a lick of English. I just left them to it and started to peruse. Salsa music was the main focus here; exactly what I was expecting from a Colombian record store. Used records were 90% of the stock, mainly from the 70s and 80s, with some truly bizarre and eclectic album covers – as we all know, anything went in those decades…

Not really knowing much about 70s and 80s salsa, I just picked out a record to buy with a cool name and a silly cover to listen to when I returned home. As I was leaving and about to exit the arcade, another record shop caught my eye. Not believing my luck, I headed over.

This one seemed even more chaotic with just boxes of records on the floor and shelves stacked higgledy-piggledy. I soon realised this shop didn’t appear to be doing as well as the other; the sign on the window seemed to suggest it was getting rid of all its stock and closure was imminent. Maybe ‘Discos Vertigo’ had taken all its custom, who knows.

I said hello to the owner and had a little look around. He was happy for me to take photos. It was more of the same, old salsa, but the records were a little more dusty and disheveled. I wouldn’t recommend trying to find this shop if you ever visit Colombia; I doubt it will still be there. 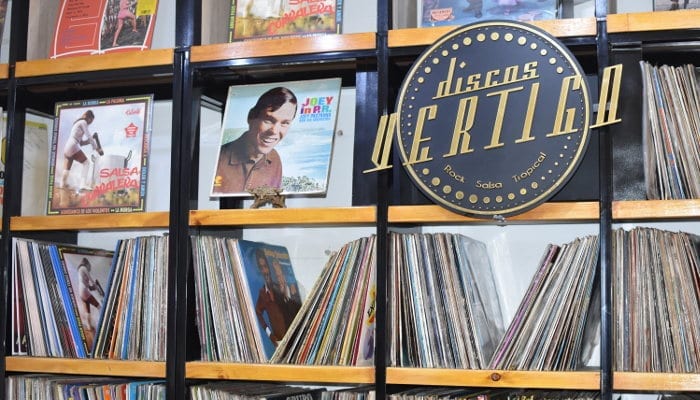 As I headed off back to my hostel, once again I spotted another music shop (I told you I had a knack for this). The name? ‘La Música’. As I’d guessed from visiting the one in Medellin, this was a chain-store. If you’re ever in Colombia, they are worth a look but inside was relatively generic records and you’re not likely to find anything but new releases.

The last city I’d be visiting on my Colombian adventure was Cali. Unfortunately, this was only for a day and a night so I wasn’t going to get time to search for records. It is, however, the home of Salsa. Walk around the main area at night and there will be a plethora of salsa clubs where you can watch (or join in) with locals who love nothing more than to dance the night away.

I did hear there’s a record fair once a year in December that’s supposed to be epic if you’re into your salsa music. I’ve also heard that record store owners in Cali are very knowledgeable about their music and could talk for hours about records…If only my Spanish was better.

Despite not getting to experience Cali’s vinyl culture, I’d had a fantastic time in Colombia discovering the country, the people, and the music. If you love salsa and records, Colombia is a place you must visit, but make sure to also take in everything else this wonderful country has to offer.