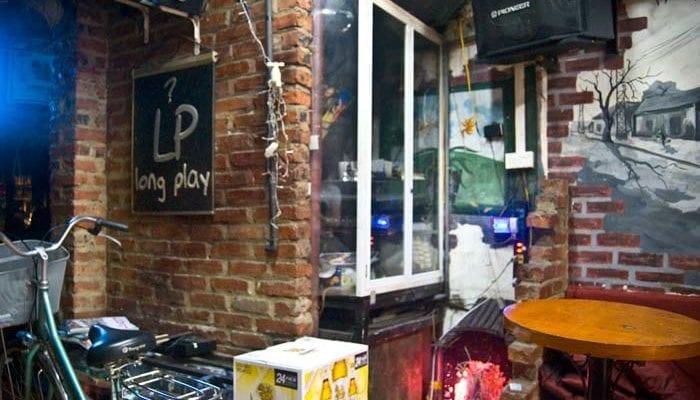 Recently, I took a two-week trip to Vietnam. I’d been desperate to visit for ages, hearing only good things about the country’s friendly people, amazing scenery and rich but troubled history. As I’m always up for a bit of traveling, my girlfriend and I decided to start in the south of the country and gradually make our way up to the north, taking in the sites and sounds as we went along.

I didn’t really think about looking for records or hunting down Vinyl Chapters in Vietnam, but I guess it was always in the back of my mind as I wandered around. I was visiting two of the country’s major cities: Ho Chi Minh in the south and Hanoi in the north. I started off at Ho Chi Minh, and after a couple of days of sightseeing, happened across a small, dusty shop with antiques in the window. Something caught my eye as I walked past. I looked back only to see a beautiful old ‘His Master’s Voice’ Grammar phone sitting in the shop-front.

I walked over for a closer inspection of this wonderful machine. It looked in great condition (see pic below), and as I marveled at finding this piece of equipment in a run-down side street in Vietnam, I spotted in a hidden corner of the shop a stack of old 45’s. Score. With my interest peaked I flicked through the records to see what I could find, finally settling on an interestingly titled 45 by 1910 Fruitgum Company called 1,2,3 Red Light. I’d never heard of it but as it had an Asian-inspired sleeve and was released by Buddah Records, I thought I’d buy it as a souvenir of my time in Vietnam. 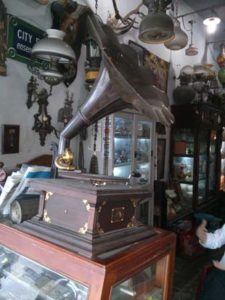 The Seed Is Planted…

This chance encounter made me think; whilst I was out there, I might be able to hunt down people to use as ‘Vinyl Chapters’ for the website. Obviously, I was in Vietnam to relax and take in the sights, but I thought if the chance came along, I’d take it. I was leaving Ho Chi Minh that evening, and wouldn’t be in another major city until the end of my trip so decided to go with the flow and enjoy traveling until arriving in Hanoi.

And enjoy the trip I did. Numerous beaches, temples, sun, relaxation, massages, bike rides, and lots of food and drink later, I arrived in the city of Hanoi on the last leg of the tour. Three days into Hanoi, and after a trip to the famous Halong Bay, I found myself with a day where I didn’t have much planned. I’d already done most of the touristy stuff and unfortunately, my girlfriend had come down with a minor case of heat exhaustion and wanted to recover in the hotel room. This gave me the perfect opportunity to set myself the task of hunting down a Vinyl Chapter.

My first step was to use our trusty old friend, the Internet. I grabbed my phone, connected to the dodgy hotel wifi, and typed ‘vinyl records in Hanoi’ into Google. I was pleasantly surprised to quickly discover a couple of leads that were within walking distance. The first was on an old internet forum talking about a place called Fox DVD Shop. Apparently, the owner was a big vinyl fan and I hoped he would be happy to talk about his collection if I could track him down. The only downside was that the internet post was from 8 years ago. The likeliness of an old DVD shop still being around was pretty slim.

I checked the address on Google maps and, as it was only 10 minutes walk from my hotel, thought it was worth a try anyway. The second was a record store called Quang’s Records. This was the only actual record store I could find via the Internet in Hanoi, with the first line of text actually saying ‘finding vinyl in Hanoi isn’t easy by any stretch’. Quang’s was about half an hour’s walk away, but actually on the way to Fox DVD. I could kill two birds with one stone. I checked if my girlfriend wanted anything before I left, then headed out on my vinyl adventure.

With Google maps in hand, the area where Fox DVD should have been was easy to find. Unfortunately, it wasn’t there. This wasn’t a major surprise to me considering the age of the post I’d found, but I was still a little disappointed. But whilst looking for the DVD shop, down a little side street off the road where it should have been I found a place called Long Play Bar.

This seemed way too good to be true, but as I headed up to the window I saw vinyl stacked around inside. My jubilation, however, was swiftly tempered as the place was closed. Bugger. Well, it was still pretty early for a bar, only being only about midday, so I thought I’d return later and see if it was open. On to the next place: Quang’s Records.

The heat was ridiculous by this point and it didn’t help that I was walking at a fast pace along roads with no shade. I was now hell-bent on succeeding and in about half-an-hour (which seemed much longer due to the sun beating down), I made it to where Quang’s was. Or should have been.

Just like Fox DVD, it was nowhere to be seen. I checked the building it was supposed to be in and it clearly wasn’t there. I checked my phone again to make sure I’d got everything right; the address was right for sure, but as I scrolled down to the bottom of the page I read the following sentence and my heart sank:

‘We are closing the shop at the above address from April 2015. New location will be updated once available.’ Double bugger. Take it from me folks, make sure you read an entire web page instead of just skimming before you go on a wild goose chase.

So, there I was in the middle of Vietnam, there was no forwarding address I could find for Quang’s Records, and I was now sweating my arse off. I needed a break, so hopped into the nearest café to recuperate and wallow.

As I sat there soaking up the air-con and sipping on a ridiculously strong iced coffee, I all but gave up on finding someone to interview for Vinyl Chapters. Then, out of nowhere, a song came on the café radio: Don’t Speak by No Doubt. This was a track from the album Tragic Kingdom and was one of the very first records I bought when I was young with my paper-round money. I took this as a sign from the vinyl gods that I must continue my search. With a revitalised hunger (and a huge caffeine hit) I paid my bill and headed back towards Long Play Bar to see if it was open yet.

Nothing could stop me now; I was on a high. I somehow knew before I got there that it would be open, even though it was only about 2 pm. There was no sign of life within the bar from the outside. I cautiously pushed open the door and was greeted by a dark atmosphere that, to start with, made me apprehensive. I was then immediately put at ease as a smiling local greeted me with the offer of a drink.

I ordered a beer, which I felt was fully deserved, and sipped as I looked at my surroundings. I could see an old record player, loads of LP’s littered around, and a bar that was weathered but wonderful. Neon lights were then suddenly turned on, bringing the place to life as the manager stepped over to say hello.

He was a friendly chap who luckily spoke some English because I could barely speak a word of Vietnamese. I found out his girlfriend owns the bar but he was the vinyl fan and happy to let me take a photo of him holding a record. Success! He put on some music (An 80s wet dream of Eurythmics followed by A-Ha) as we discussed records, music, and the bar. He then retrieved some records of his own, choosing Bob Marley’s Rasterman Vibration as his Vinyl Chapter for the website. 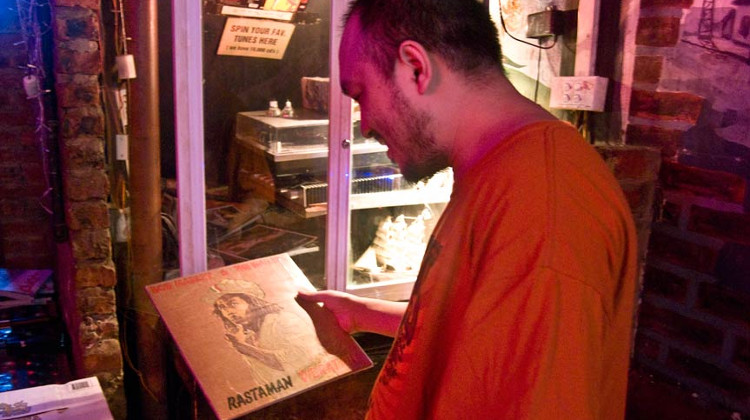 Long Play Bar was a great place to end my vinyl adventure in triumphant fashion, and a fitting way to finish off my trip to Vietnam. As with everyone I met in the country, the manager was friendly and laid back, and after talking for a while was only too happy to contribute to Vinyl Chapters. I highly recommend anyone who hasn’t visited to try Vietnam for the culture, history, and beauty, but if it’s records you’re after, maybe wait until you’re back home!

**Check out the website home page or the Facebook page to see the manager’s Vinyl Chapter and read about why he chose it!**