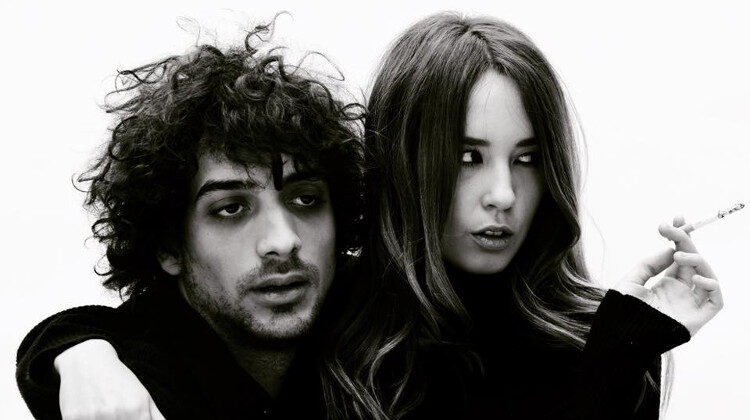 Rock operas were all the rage for a period of time, now Anglo-French duo TTRRUUCES show us theirs on their self-titled debut.

Jules and Natalie, musical duo TTRRUUCES could be described as Sgt. Pepper played by Tame Impala tripping in a field. It’s a big compliment being compared to a global icon as well as current psychedelic torchbearers, and is also seemingly justified. Gaining support from Radio 1, 6 Music and Radio X they’re already conquering traditional media – whilst still finding themselves on key streaming playlists. Combining Jules’ Parisian background with Natalie’s Mancunian roots is an interesting mix, yet with both cities being crucial to the arts it is sure to make their debut album something unique.

The album is written as a rock opera, telling the story of outsiders Sadie and Syd, who meet at a local disco and bond by experimenting with the drug ‘TTRRUUCES’ together. On the face of it, it’s a clichéd and overplayed story (especially for what appears to be a psychedelic album); however, its simplicity in narrative allows the band to experiment with sounds.

Opener Sad Girl, is a blatant nod to The Beatles. Lyrically, instrumentally, structurally – they even call the girl Sadie! Don’t allow yourself to be fooled by the opening song though (you’re not listening to The Bootleg Beatles), as all the songs that follow are vastly unique and modern. The Disco, for example, is a blend of afrobeats and (obviously) disco, perfectly encapsulating the ecstasy of two young minds colliding on a night out. By writing a rock opera it allows genres to be bent and sounds to change drastically throughout the album, in order to emphasise the narrative development, something TTRRUUCES use to their advantage to showcase their artistic variety.

Fourth track, Lost Boy, follows The Disco and is arguably the best on the album. Production (which is done by the band themselves) is spectacular, succeeding in the difficult task of making many different layers remain spacious. This, and penultimate track Something Inside is the closest to nineties/two-thousands Brit Rock as TTRRUUCES get, combining strings with groovy drums and melodies to create songs that have the potential to be anthemic. If you are a fan of Kasabian or The Verve you will most probably love these songs, as it is a beautiful mash of both band’s fun and drama.

As TTRRUUCES progresses, the tracks get stranger and further into psychedelia, before reaching I’m Alive (which was lucky enough to be featured on FIFA 20). This is the most pop the album gets, which unfortunately hinders the rest of the album slightly. FIFA has spring boarded many talented artists throughout the years, yet their choice of songs is always similar sounding and predictable. With I’m Alive being the closest to a traditional single and being typical FIFA music, it sounds out of place and bizarrely makes you long for more singles to choose from. Thankfully, the previously mentioned Something Inside follows, before ending on the slow and hypnotic Sleepy Head.

Rock operas are polarising to say the least, often hit or miss, with TTRRUUCES just pulling it out the bag. Making the decision to release a debut that favours narrative over traditional radio hits is brave, but without the expectations of a previous release, it has allowed the duo to experiment freely. The result is a unique work of art that is a fun experience first time around, but its replayability and emotional connection doubtful due to its lack of high-quality standalone singles. TTRRUUCES obviously have the talent and vision with an even brighter future ahead to look forward to. So, see TTRRUUCES as Nirvana’s Bleach… Nevermind is just around the corner.