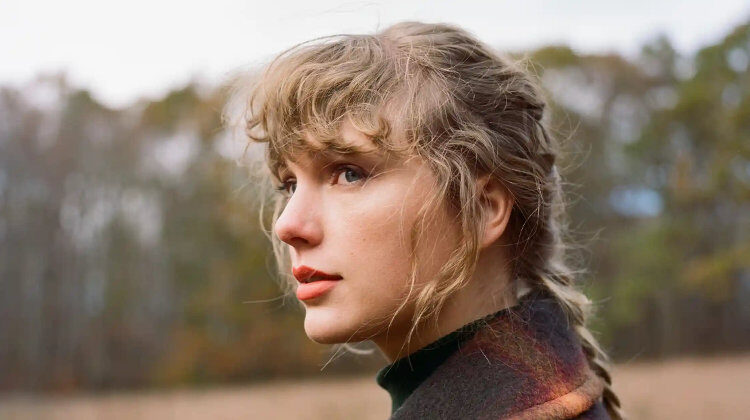 Taylor Swift surprises the world once again with 9th record, evermore, a ‘sister album’ to her well received folklore.

2020 may have been a tumultuous and anxious year for many, but one positive that has arrived out of the pandemic is the amount of creativity from the music industry. Lockdown albums, special releases, online gigs, and tailored tracks have kept us entertained when we’ve been unable to attend festivals and gigs, and unable to leave the house. Taylor Swift has already released a surprise lockdown album of her own back in July with the fantastic folklore and her second surprise album of the year, evermore, is a ‘sister record’ to that release, recorded at the same sessions. As Taylor says herself, ‘the story continues’…

Starting with willow which is also accompanied by a surprise video, we’re back into the soft and folk pop-laden sound of folklore against settled acoustic guitar. The track flows amongst a typically catchy ‘Swift’ melody as she builds lyrics of guile and verve, stating “I’ll come back stronger than a 90s trend”. The piano-based champagne problems then follows with a beauty and tenacity against a strong and earnest vocal performance that builds in presence in a mesmerising way. ’tis the damn season is the cure for all the upbeat and jolly Christmas songs, a solemn and emotional call to arms based around Taylor’s heartbreak and loneliness in a life full of people and relationships that can feel plastic and cheap.

There are a few more featurettes on evermore including the excellent no body, no crime with pop-rockers, HAIM. Against a country underbelly, Taylor unveils a story of revenge and malice that swells in the mind like Dylan’s The Hurricane or The Raconteurs’ Carolina Drama. The HAIM sisters don’t have much to do throughout, adding vocals to thicken the sound at times but it does give it that extra something. Marcus Mumford makes an appearance on the bluesy and settled cowboy like me adding warmth and candour to proceedings and really helping bring the track out of its shell.

After listening to the record a few times, you realise it’s a lot more playful and free than folklore, able to feel more experimental and go off on more tangents. happiness creates a subtle folk-synth soundscape that suits the warmth and sincerity in the lyrics whereas ivy plays on jaunty guitar with a quickly arriving chorus that is a standout for the record.

The featured artists continue throughout, spread through the record but never feeling overplayed. The National crop up on the more subtle and classically ‘Taylorised’ coney island with Matt Berninger getting some lines of his own and some great harmonising in a similar vein to Bon Ivor’s work on folklore’s exile.

Speaking of Bon Ivor, Justin Vernon pops up on vocal duties once again on album closer evermore, this time building from a stark and downbeat reminder of the troubles of the year before building into the hope of the days to come. The track rises in pace and stature as Vernon’s vocals enter the fray providing that energy needed to help the track stand out, then falling back into its solemn beauty.

evermore is the second surprise triumph from Taylor Swift in 2020. The session’s which both folklore and evermore were taken from join together to make a whole, the former a more focussed and willingly prevalent collection of tracks and the latter giving off more of an air of freedom and breeziness. It does still have its darker moments and the tracks are still cleverly played out, but it has that ‘later sessions’ feel to it which makes a subtle difference. A wonderful ‘sister album’ cementing Taylor Swift as the fantastic artist she is.