Home » articles » Spider-Man Vs Aquaman: Battle Of The Vinyl Soundtracks 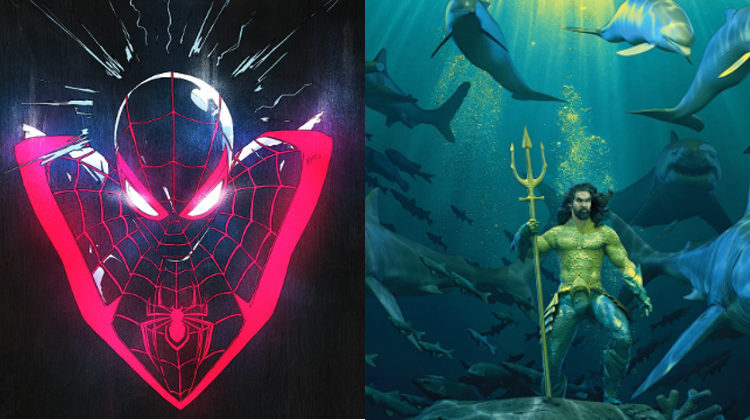 We take a look at two of Mondo’s recent soundtrack releases back to back, namely Marvel’s Spiderman: Miles Morales video game and DC’s Aquaman Movie.

This month we’re pitting videogame soundtrack against movie soundtrack, Marvel vs DC, Spider-Man versus Aquaman. The web-slinger and the King of the Seas are both heavyweights when it comes to comics and both have recently graced our screens as big-time movie adaptations, but we’re interested in how these characters have been portrayed in relation to their soundtracks.

Below, we’re going to be taking a listen to two of Mondo’s recent releases based around these titular characters, namely the Aquaman movie soundtrack and the Spider-Man: Miles Morales videogame soundtrack.

Let’s start with the web-slinger, shall we? Being one of the most well-known superhero characters of all time, Spider-man has graced a plethora of video games over the years, arguably none so popular and high-scoring as 2018s, Spider-Man. Developed by Insomniac Games and published by Sony Interactive Entertainment, the game was undeniably a hit, with players able to swing on webs around New York City, perfectly portraying the titular hero. It was such a success that with the announcement of the Playstation 5 also came the announcement of a follow-up Spider-man Game, Spider-Man: Miles Morales.

Released in 2020, Spider-Man: Miles Morales follows the story of teenager Miles Morales instead of the more well-known Peter Parker. Miles was bitten by a spider and gained powers, similar to Peter, but also has the added abilities of invisibility and an electric attack. The game once again received rave reviews, not only for the game mechanics, playability, and graphics but also for the soundtrack.

The soundtrack really is a mesmerising piece of work in its own right. Videogame soundtracks and vinyl have been popularised over the last decade or so, and it’s easy to see why when you listen to SM:MM. Composed by John Paesano, he really gets into the essence of what Miles Morales is all about using his unique build-ups and action-tingling flows to create tension and calm when needed. Having worked on the previous Spider-Man videogame soundtrack and also the Marvel Defenders and Daredevil television series’, he was the perfect choice for the project.

The Music To Make You Web-Crawl

Spread over 16 tracks, Paesano creates an epic soundscape of music that sweeps, flows, and builds on moments in the videogame that cause tension or apprehension. Starting with Don’t Give Up gently caresses the soul against a sound that easily makes you imagine a young superhero with the weight of the world on his shoulders. Strings softly flow, piano builds and we gradually arrive at that rise in stature that signifies the web-slinger coming to terms with his responsibilities. Epic stuff.

What’s really interesting about the soundtrack is its frequent use of hip-hop beats, perfectly playing into the nature of the game and the main character’s dual ethnicity of Afro-American and Puerto-Rican; the music enjoyed by our hero. This is on show in the fantastic New York’s Only Spider-Man, as epic rises fluctuate upon heavy beats and soaring wind instruments.

Confession shows off the lighter dexterity of Paesano’s work, even bringing in synthy underlayers to add further playful elements to the sound. You can imagine this being played in a stealthy section of the game. Other noticeable pieces include the energetic and dance-tinged layers of All In, the ethereal beauty of building strings and gentle tones on Make It Right, and the uplifting powerful Won’t Give Up, once agan layered with intriguing hip-hop beats and also throwing in that synthy playfulness.

The album also features a track from Jaden Smith entitled I’m Ready, full of big beats, superhero stylised lyrics of being ready to take on the world and a catchy chorus. A couple of tracks from Lecrae are also thrown in for good measure, the piano-driven, beat-heavy Where We Come From and the synthy and empowering This Is My Time.

A Bright and Fun Vinyl Edition

The vinyl and packaging for Spider-Man: Mile Morales really comes together in a beautiful way. With artwork designed by Chun Lo, the album cover sees a portrait of spider-man with his ‘spidey sense’ tingling set against a dark background. The inside cover features a double spread of the hero in prime fighting position as his electricity stylised powers fluctuate around him. The music is housed over two beautiful 180g discs, one black and red for Miles, the other with a purple and green design (hobgoblin?).

So, what can Aquaman fight back with on his vinyl release? Aquaman might not have as high a profile as Spider-Man, but what he lacks in fans he makes up for in power and coolness. This soundtrack is for the movie version of Aquaman which came out in 2018 and is part of the DC comics extended universes. Featuring Jason Momoa as our water-based hero (human name, Arthur), the actor is the perfect portrayal of the character, being ruggedly huge, confident, and powerful. As a half-Atlantian, half-human, Arthur possesses the traits of both worlds and is the apparent air to the underwater throne.

Aquaman has been one of the more well-received out of the slew of current DC movies and features some fantastic CGI, especially in the underwater scenes. The music had to be powerful and unique to match the film’s characteristics with the deluxe vinyl rendition showing us exactly why you shouldn’t undermine superhero soundtracks as ‘all the same’.

The Music To Listen To Under The Sea

The Aquaman movie soundtrack was composed by the wonderful Rupert Gregson-Williams, a stalwart in the film industry, with previous film work including fellow DC counterpart Wonder Woman, as well as Over The Hedge, Bee Movie, and The Legend of Tarzan. With a mammoth 31 tracks, this special edition release also features songs by Skylar Gray and Pitbull.

In fact, it actually starts off with a track from Skylar Gray. It does feel a little odd as most of these types of soundtracks have the film scores first, but it does actually work. The film version of her hit Everything I Need works well with a string-heavy sound running throughout against hard-hitting drums and an uplifting atmosphere. Gregson-Williams then takes over with the aptly named Arthur kicking off proceedings, an eerie, atmospheric builder with hints of that famed Wonder Woman power about it. It focuses on a more electronic underbelly against big and powerful wind sections.

It’s that electronic flavour that frequently helps the soundtrack standout amongst other superhero music and it’s an area in which Gregson-Williams excels. What Does That Even Mean brings that subtle electronica further into the forefront as it builds, with Black Manta going almost full electronic dance against slow, grinding beats and hypnotic, bass-laden sections. These playfully ebb and flow amongst the more traditional sections of the composition.

It’s not all strings and electronica, however, with some of the more subtle tracks standing out for their beauty and ethereal nature. Between Land and Sea portrays Arthur being torn between two worlds really well, starting off as slow and pondering in nature before a gigantic uplift in heart and hero status by the end. Map in a Bottle is a beautifully serene piece that layers decent ideas and flows before tailing off to an abrupt, drum-fuelled ending.

The Toto-sampling Pitbull track Ocean To Ocean couldn’t be any more different from the compositions of Gregson-Williams, but it offers some nice bonus material along with the original version of Skyler Greys Everything I need.

The Vinyl to Unite the Seven Seas…

This Aquaman soundtrack release is actually the first of a series of DC movie tie-ins from Mondo, with Shazam! currently available and Doom Patrol to follow at some point in the future. It’s a good start to the series and a mammoth release with the soundtrack spread over three heavyweight, multi-coloured splatter discs.

The original artwork is provided by the talented Pascal Blanché who has really captured the dark undertones of Aquaman’s underwater world as sharks and dolphins surround him and light pours in from the outside world above. The inside gatefold depicts two armour-clad Atlantians with the sea monster, Karathen, in the middle.

Overall, both these soundtracks have something that sets them apart from the other and worthy additions to anyone’s superhero vinyl collection.  Spider-Man might be the more well-known character and Miles Morales is a welcome, recent twist on the character which has allowed for a little more playfulness and sampling in the compositions. The fact it’s a video game soundtrack also gives it that little more freedom to try new and interesting ideas.

The Aquaman soundtrack is more epic in nature being built for a movie, and its use of synthy electronica at times really helps build an overall atmosphere that fits in with the film’s aesthetic. Both superheroes have been portrayed brilliantly by each composer and should stand side by side as prime examples of how to compose superhero soundtracks.

Both albums are currently available from the official Mondo Website.