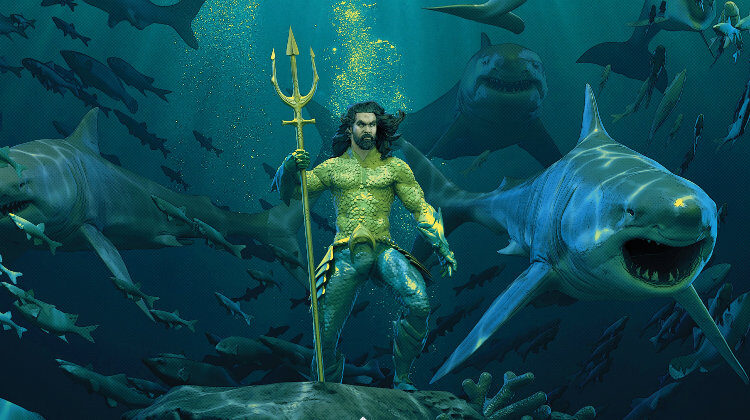 Mondo are renowned for their special edition movie and tv show soundtracks, and now, in collaboration with WaterTower Music and DC, they’ve kicked off a superhero-fest of releases with the one and only Aquaman.

This deluxe edition of the 2018 movie that features Jason Momoa as the fishy superhero is brought to life by excellent composer Rupert Gregson-Williams. This release includes the complete score from the movie as well as a disc of bonus tracks and remixes including Ocean to Ocean by Pitbull and Rhea, and Everything I Need performed by Skyler Grey.

This premiere vinyl pressing is not just a feast for the ears but also the eyes. Produced on three 180gram splatter (green, yellow, and blue) discs or plain ol’ black, the records come housed in a beautiful tri-fold case. Artwork is provided by the wonderful Pascal Blanché, who has really done a great job. The front cover is a beautiful recreation of the classic scene of our titular hero undersea with his trident and surrounded by aquatic wildlife including sharks, fish and dolphins.

On top of this, Mondo have promised a range of further DC releases to be spread throughout 2021. So far they have confirmed another DC fan favourite movie in the soundtrack to Shazam!, as well as seasons one and two of cult classic, Doom Patrol. John Williams classic score for 1978’s Superman has also been confirmed.

With a slew of other DC releases slated for the year, we’ll keep our beady eyes out for you and let you know when any other soundtracks are confirmed.

Expected to ship in February 2021, the Aquaman special edition release is available to order now from the Mondo website.