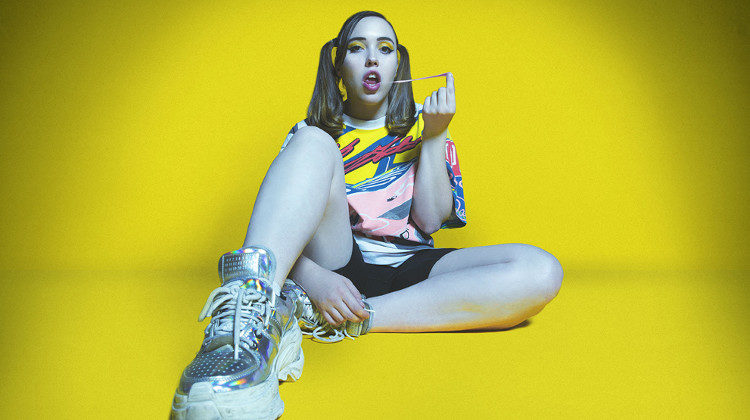 2018s debut album Clean by Soccer Mommy won Sophie Allison a legion of fans and critical acclaim for its open-ended honesty, relatability, and her penchant for creating raw but well-structured songs. It’s ‘quiet grrrl’ leanings brought the sub-genre closer to the mainstream than ever before, featuring tinges of folk amongst flashes of raw guitar and intelligent wordplay. New album Color Theory is an impressive evolution of this sound as Allison attempts to grow on a personal level amongst more developed tracks, tighter atmospheres, and still maintain the impressive lyrical intelligence and honesty we all know and love.

Kicking off with opener Bloodstream is the perfect introduction to the record and the album as a whole. The muted electric guitar is enveloped by the acoustic as Allison gets straight to work on showing the listener her current mindset through lyrics:  “There’s a pale girl staring through the mirror at me, maybe it’s just a dream, wish I could go back to sleep.” It features a subtle, slow-building atmosphere with the singer crafting a track in a more controlled and structured way than ever before.

Circle the Drain continues the strong start as simple guitar is enveloped by a dreamscape of sound with Allison’s vocals become the focal point, singing  of familiar but no less poignant lyrics based around mental health, depression and how hard life can be when you’re in that state: “Chained to my bed…watching TV alone till my body starts aching.”

If the lyrics are what we’ve come to expect from the singer, the music has definitely evolved since previous record Clean. There’s still that subtlety and penchant for stripped-back, perfectly dissected guitar rhythms, but where things really get interesting is when we can hear the artist developing the sound whilst growing personally. Gone are the random outbursts of angst and fuzzy guitars of earlier work, and in its place we have beautiful, dreamy soundscapes that rise and fall throughout. Yellow Is The Color Of Her Eyes produces floaty, hanging sounds that linger perfectly as Allison’s paced vocals provide the solace to its long run time, whereas Night Swimming is content in its own prettiness as melodies shimmer, strings rise and fade, and there’s just enough of an unsettling atmosphere to really make it feel like something special.

The record ends with the harrowing Gray Light, which sees the singer apparently accepting the inevitability of death, but not in a bad way – accepting it is the first step to enjoying what you have in life and not letting it define who you are.  She manages to portray this throughout in a way that only a skilled songwriter can, adept at pulling at the heartstrings but also injecting a little humour and soft touches where necessary. It’s a strong and thought-provoking end to the record that sees the singer in a strong place, fully in control of her mental health.

Color Theory is a beautiful transmission for Soccer Mommy, from quiet grrrl underdog finding if difficult to control her mindset, to nuanced and skilled songwriter able to portray and build layered tracks that listeners can relate to. The growth from previous work is apparent from the outset, and although many will still see Clean as an album that was with them in a time in need, Color Theory has grown with her fanbase and still unafraid to paint uncompromisingly honest self-portraits.