Home » articles » Silverchair: The story of their rise to fame and debut album ‘Frogstomp’. 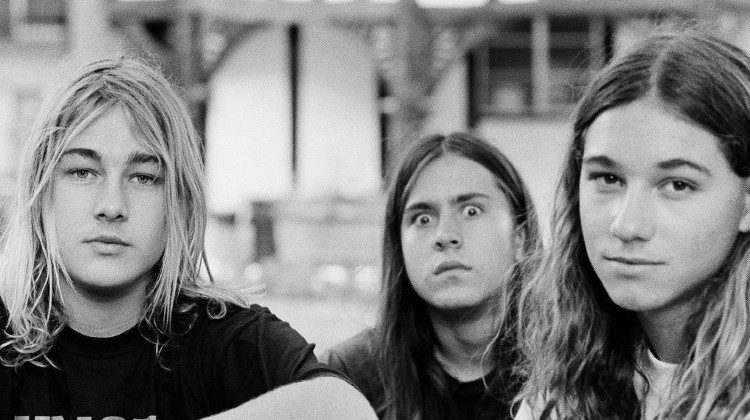 Matthew Wand takes a look back at the humble beginnings of post-grunge stalwarts Silverchair as we approach the 25th anniversary of their debut album, Frogstomp.

In March of 1995, a three-piece post-grunge band emerged onto the world stage. Hailing from Newcastle, New South Wales in Australia, their debut album was Frogstomp. They were just fifteen years old, had a bunch of songs, and a BIG dream.

The spring of 1994 saw a joint venture by the Nomad TV Show and alternative radio station Triple J, culminate in ‘Pick Me’, essentially an unsigned act demo competition with a professional recording of a single and a music video as the grand prize.  Around about the same time, three school friends under the name innocent criminals were entering a recording studio for the first time. Having formed two years earlier, close friends Ben Gillies (drums) and Daniel Johns (guitar/vocals) founded the group before being joined by a fellow schoolmate, Chris Joannou (bass). The band recorded five tracks at Platinum Sound Studios. One of those tracks was the anthemic, Tomorrow. This demo was the song that the young band would submit to the ‘Pick me’ competition. It was announced in April 1994 that they were the winners with the debut of the recording and video to follow in June.

On the day of the premiere, it was revealed that the winning band were now called Silverchair, naming themselves after the CS Lewis Narnia chronicle, The Silverchair. The response from the public was phenomenal with the song being put on heavy rotation with the alternative radio station. The inevitable scrum by major record labels to sign the ‘Chair soon ensued with the band finally penning a three-album deal with SONY subsidiary, Murmur Records. The Triple J version of Tomorrow was then released as an E.P. which spent six weeks at the top of the Australian singles chart.

Nine days is all it took for the three teenagers to record their debut album with producer Kevin “Caveman” Shirley. The sessions were all tracked in a live room to capture the sound the band created in their live shows, with overdubs and vocals laid down afterwards. The Caveman wanted the album to sound like Silverchair, raw and loud.  Daniel Johns commented later that Kevin Shirley wanted “Loud Fucking guitars!”

The album consists of 11 tracks mostly co-written by Johns & Gillies. The composition showed great maturity for three 15-year-olds. The flow and sway throughout is infectious. The guitars are heavy, loud and punchy as are the guitars riffs used within.  Songs such as Israel’s Son, Undecided, Leave Me Out, instrumental powerhouse Madman and the sleeper track Faultline demonstrate the crunching metal grooves in Drop D tuning, the latter tune showcases Silverchair at their heavy riffage best. There is also a softer side to their sound, the intro to the BIG hit Tomorrow, Shade and the heartbreakingly fragile suicidal dreams all further the intelligence of the three musicians.

The lyrical content has at times been up for debate, being referred to as immature or naïve. The very opening lines of the album from the cut Israel’s Son were also used at the primary defence in a multiple murder trial in the US. Johns readily admitted looking back that he drew inspiration from his surroundings or from what he’s been exposed to in the media, having not experienced much in his life at that point. Going forward that was not going to be an issue.

On March 27, 1995, Frogstomp was released internationally. Backed by the release of five singles, it was a critical and commercial success. It reached number one in the Australian album charts and hit number nine in the US Billboard hot 200.

Not all of the reception was good though for the ‘Chairs debut release. In 1995, pretty much any alternative guitar bands at the time (I’m looking at you, Bush) were being branded as post-grunge wannabes and riding the coattails of the bands from the Seattle movement. But what none of the critics could deny was that when Silverchair would eventually come of age, that they would be a force to be reckoned with. How right they were.

I don’t want to labour the point of the age of the band any more than I already have. Bearing in mind though, to put it into perspective, 99.9% of high school bands do not make it out of their garage or at best a one-off show in their school hall. Johns, Gillies and Joannou were thrust into the limelight, not just at home but all over the world. Not many bands can boast that the first BIG tour was supporting the Red Hot Chili Peppers around the US. Whilst most grunge kids were daydreaming of getting signed and making it big, Silverchair were living it. They were appearing on TV, giving interviews, playing festivals and winning awards.

Silverchair would continue to wow fans and critics alike as they released a further four albums from 1997 until 2011 when they an announced they were going into indefinite hibernation. In their time they became the biggest band in their native Australia, and would often emulate but never eclipse the success of Frogstomp internationally.

Now as the album turns 25 years old, it still passes the test of time. Like many albums released in the early to mid 90’s they sound as fresh and relevant as they did back then. The fact that alternative and metal kids are still discovering and falling in love with Silverchair is a testament. Will the ‘Chair ever wake from their hibernation? I can only hope and wait ‘til tomorrow.