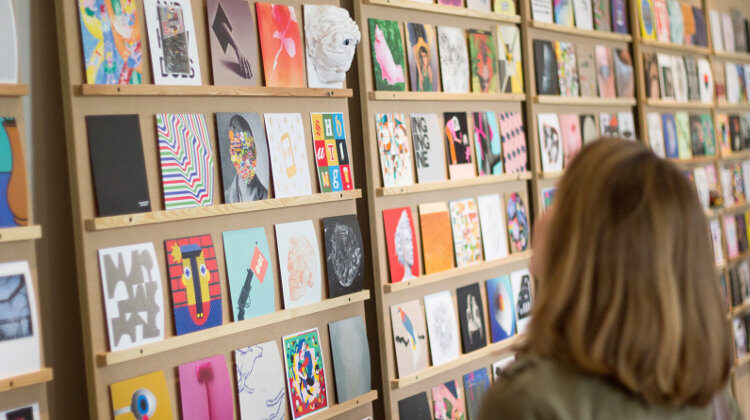 We speak to Secret 7” co-founder Kevin King about the long-running project, how it’s grown over the years, and what we can look forward to at the final exhibition.

2020, I think anyone would agree, has been a strange year. With the coronavirus pandemic changing how we operate as a society and still affecting our lives on a daily basis, one of the many industries that have been affected is music. Live venues have been closed, record stores are struggling to survive and artists, especially up and coming ones, have seen their chances in the industry dwindle.

Despite all of this, people still keep going, find innovative ways to help the situation and have a belief that we can all get through this. Charities and support units have been created to help those in need and special measures have been drawn up to try and protect industries such as the arts. This is exactly why we need projects like Secret 7”, to remind us what music means to people and how cover art can say a lot more than what first meets the eye.

If you haven’t heard of Secret 7” before, it truly is a fascinating project. Co-founded by Kevin King and Jordan Stokes, Secret 7” is now in its seventh and final year under the current format. But what is it? In its basic form, it’s a unique way to purchase original artwork and iconic music. The duo secure the rights to seven tracks, which this year includes Bob Dylan’s Blind Willie McTell and Aretha Franklin’s One Step Ahead. 100 copies of each track are then pressed onto 7” records with 700 unique sleeves of artwork produced for each and every one. Artists, sculptors, photographers and illustrators from across the globe are invited to create these record sleeves, with people also able to submit their own designs for consideration.

These are then displayed at an exhibition in London, with people able to purchase the records on the final day. The ‘secret’ element? You don’t know what artist created your sleeve or which song is on your 7” until you’ve purchased. There’s sometimes clues within the artwork but that’s all you’re getting. On top of this, profits from the sale of the records go to a charity of choice each year, with this year’s chosen charity being ‘Help Refugees’.

Kevin, who came up for the idea of the project back in 2012 remembers how it came about: “I was working at Universal in their research and insights team. I did a lot of fundraising there… I did a three peaks challenge and lots of quizzes, all those types of things. Nothing that really involved recorded music. I felt challenged to think of new ways in which to fundraise. I’d been to the RCA postcard sales event – it’s a similar concept but with postcards. I thought it was a lovely idea and would work really nicely with records, so started to work on it. It slowly took over my job until I left working there, which was around the 3rd exhibition. We got other brand partners involved to make it bigger, from weekend shows to a month-long show and integrating various other events at film screenings, talks, and so on. It sort of blew up and everything got bigger and better.”

Seven years later and the event is still going. Kevin is proud that over this time the idea has stayed intact, even though the moving parts around it are constantly changing. “The concept stays the same but things like the artists, tracks, venue, all change to keep things fresh. We have an open submission where anyone can get a pack for submission of a sleeve to feature or submit online. Last time around we had 7000 submissions. Then there’s the other side which is us inviting people. That includes some of the top names we’ve had in the past like Gilbert George and Peter Blake. There’s a whole host of illustrators, design studios, sculptors, you name it. Many of them do it year after year. Very roughly, I think the show is 50% invited, 50% open submission.”

With such a host of big names from the art world, trying to get the rights for artist’s music, and attempting to whittle down all the submissions, it’s not always been plain sailing. But Kevin does seem to enjoy integrating everyone into the project, with some wanting more of a hand in the decision process than perhaps he would have been comfortable with… “A couple of times we’ve gotten musicians involved but we kind of stopped doing that in the early days… Robert Smith from The Cure insisted on being included. It was the first year and I wasn’t going to argue with Robert Smith! He basically took out any sleeves that had an image of his face on it, regardless of whether it was good or not. It was awkward for that year because one of the big, top names from the art world, David Shrigley, had submitted and he’d done seven portraits of Robert Smith. All different but his iconic face on it. I was like, “Please can we keep this one?!”

What’s great about Secret 7” is the secret factor. This allows everyone to be at an even keel when purchasing the records and artwork at the exhibition. It allows people to potentially own a piece of artwork from a famous face they never would have been able to. “In the second year, we got Gilbert & George and Ai Weiwei. That was a real turning point for us because they’re huge and it sort of set a precedent. Those were the sort of names we needed to go after, primarily for the press. Although, a lot of my favourite ones actually come from the open submission. With our sale day on a first come first served basis, it’s those big artists that our audience is queuing up for. I think the queue was about 52 hours last time around.”

Vinyl and artwork have always complimented each other and Secret 7” really brings this symbiotic relationship to life. It also allows more artistic freedom than traditional sleeve art as Kevin goes on to explain: “Part of the project is that you can take a song like Peter Gabriel’s Sledgehammer and you get two completely different responses to it through the sleeve art. That’s the magic of Secret 7. People get these physical packs from us that allow them to go off and create something completely unique – you can’t go and make a general release encased in concrete for example, or toy figures on it or made of lego, but you can with us. People can really push the concept of what a record sleeve is. Every year there’s two dozen or so that will come through and be something really original. Today I unwrapped a giant condom, a sealed giant condom for one of the tracks. And it’s going to have the record inside it!”

What really makes Secret 7” so special is the money it’s raised for various charities over the years. Although it’s hard to pick one charity over the other, Kevin tries to make sure that the ethos of art and music is included in some way when deciding who to donate to each year. “This year we chose the charity Help Refugees. I was familiar with the guys, they do the ‘Choose Love’ t-shirts, bags, etc. They were on my radar and I find them really inspiring. Often, who we choose, they’ve got a link and occupy a music and art space. The first year we supported Teenage Cancer Trust who have gigs at the Royal Albert Hall every year. War Child are quite similar. We’ve done other small charities such as Art Against Knives. We work with a lot of young people in London, engaging with them through culture. It’s always played around in that area and Help Refugees is the same in that they integrate a lot of visual representation into their fundraising.”

2020 will be the seventh Secret 7” event and, unfortunately, the final, but this doesn’t mean the end for the idea. “It just feels like an apt time for us to stop. Jordan and I co-founded the project and run it together. Jordan actually moved from Manchester to Sydney after the first year and we’ve been running the project like that ever since. It’s just getting harder, we’re getting older, we’ve got kids now… the project is just a bit too mammoth to keep going like that. I don’t think it’s the end of us, but it’s the end of the concept being so rigid. We always had in mind we wanted to do seven – we’ve got this obsession with the number and we finally got there. From the way things are set up in the background and public-facing, it just needs to be refreshed.”

With 2020 being the crazy year it is, the secret 7” exhibition has been moved back to run from 14th October to 1st November, which means you still have plenty of time to plan your visit. Taking place at the Now Gallery on Greenwich Peninsula in London, there will be tighter restrictions in place with people having to book in advance via a time slot. You can do this through this eventbrite page.

To find out more about the project and to have a look at this year’s artwork and submissions, head over to the official Secret 7” website.