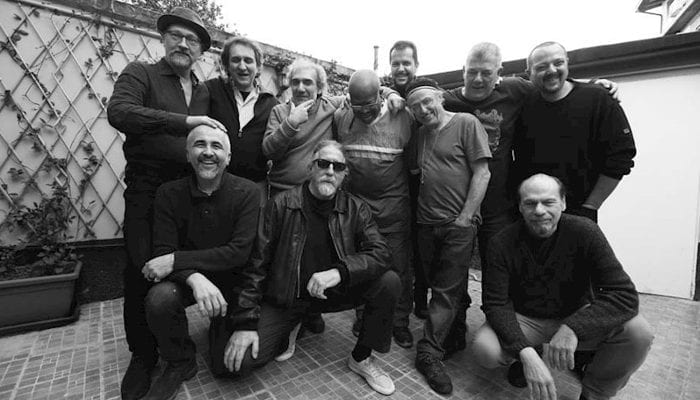 The J. & F. Band features a myriad of seasoned musicians who use new record From The Roots To The Sky to show off ideas, showdown with each other, and jam to their heart’s content.

Once you’ve been in the music industry for a long time it must get tiresome. Playing certain generic rhythms, melodies and songs that you’ve been over time and time again can’t be fun all the time, and so you can’t be blamed for looking for new ways to play your music. Jazz, for many, is the outlet of choice. Allman Brothers drummer, Jaimoe, and his long term friend and bassist, Joe Fonda form the basis for this jazz rock experimentation group, featuring input from other seasoned jazz musicians and influences ranging from Sun Ra to Miles Davis, and psychedelia to 70s rock.

GS#2 starts off this epic journey as the bass bends and struts its way through improvisation against a live sound. It’s all very technical, and physical; you hear Joe Fonda breathing along in the background as he concentrates immensely. This ferocious beginning settles down eventually to a simple riff that could be taken from the Oceans 11 soundtrack for all its smoothness and camaraderie. Other instruments gradually join in, with Jaimoe’s drums keeping everything in check as trumpets, guitar and percussion fade in and out amongst the electrical atmosphere. It’s an introduction to what the record’s about: everyone having fun and riffing off each other. 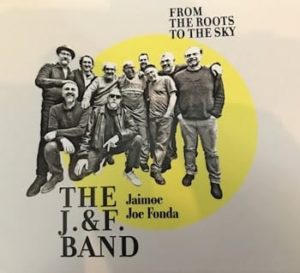 Spirits Of The Great Plains is more of a silky, smooth number that begins with a crawling, sordid atmosphere that waltzes slowly forwards, telling a story without words. The drums have spasms of individuality and creativity throughout with credit to Jaimoe’s timing and dexterity. Everything else is built around this rhythm, and each accompanying instrument has its turn in the spotlight. The jazz atmosphere is unleashed to its full potential as the band jam harmoniously, with the track ending in ferocious fashion with everything battling to be heard in an atmosphere of chaos.

Dixie Chicken/Mischief features Fonda on vocal duties as this jazz/blues fusion speaks from the heart with all the skill and dexterity seasoned musicians possess. The old songs are given new life here, as Fonda sings “We hit all the hot spots, my money flowed like wine till the lowdown southern whiskey began to cloud my mind”. The vocals are gruff and unforgiving, and at times almost hidden under the music as the live atmosphere feeds into an extended jam session to finish.

Roz See You On The Moon has 20 minutes to play with, allowing it to drift between heavy improvisation with a psychedelic feel that’s interspersed with Jimi Hendrix-esque guitar sounds. This leads into a convoluted but inspired mess of ‘good times’. Björkenheim is given a chance to really show off his guitar skills, before this cuts out and allows the second half of the track to become more civilised and conventional with a steady rhythm. A sinister atmosphere then makes way for tight playing as the brass section takes turns to shine in the spotlight.

The record ends with another monolith of a track entitled Super Jam. The build up takes an age, but gradually settles down to a more conventional beat that’s perfect for other instruments to play around with. The track conveys a dizzying number of emotions and ideas, some hitting home to perfection, others full of experimentation that may be lost on all but hardcore jazz fans. As the title suggests, the coherence can disappear at times, but that’s a sign of a good jam, and something that musicians this skilled thrive on, playing for nobody else but themselves.

From The Roots To The Sky is a record of free flowing ideas from skilled musicians at the top of their game. At times, you can almost see everyone vying for that top spot, as players hijack the track from each other in the hope to hold on to it as long as possible, before being unceremoniously brought to their knees. At other times, a monstrous rise of instruments leads into a structured shambles of sound, before you’re suddenly listening to a more melodic part that tames the atmosphere again. It’s  like a workout at times to listen to, but in a good way. You listen to enjoy the way these extremely skilled musicians work, and the mesmerising dexterity in which they create a vivid and ever-changing picture.