Musician Sam Waks (the face of Sound Strider) has been on his vibrant electronic journey since the early 2000s when he learned to mix vinyl. Like many electronica artists, vinyl seems to be the starting point for these aficionados. This can seem strange, but this mixing of old technology and new sounds is what helps makes the genre special. It allows the artists to be at once grounded, but also expand their minds at the same time. This is exactly what Waks has done with new record Occult Electric, as he lets loose any idea that comes to his head in a spacey psychedelica mix that’s always drawn back to the realm of sanity by vocal snippets, steady beats and strong melodies. On top of this, it’s being released on Waks’ own label and production company, Red Tent Records, allowing the artist to have complete control over the creative process.

Helpless Cogs starts the record with rising and falling synths filling gaps between ongoing dreamy vocals speaking of chaos, voids and the universe. This simmers into a hip-hop drum beat against psychedelic sounds of Asian ascent before bass and trance beats join in being backed up with spacey fragmented vocals: “Magic is a doorway between which we step”. Violin provides a rest bite to the chaos that ensues, and even features other recognizable noises to settle your mind back into reality, such as seagulls by the beach. It’s a mix of the supernatural against the familiar that works really well. 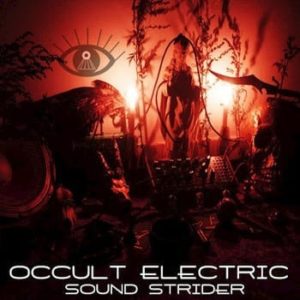 Hail Eris begins with gentle laughing of a man and woman before it heads into a tron-like vibe that ebbs and flows through the space between the listeners ears. Its beats ride the rhythm on a bed of synthy sounds that are accompanied once again by snippets of vocals based around life, the universe and anything psychedelica, as the track shouts out “all hail discordia” – the goddess of disorder. This analogy fits the track pretty well, as it never allows itself to settle down into a rhythm and forever keeps the listener guessing.

Plague Of Wizards sounds like an ancient tribe learning its place in the universe through music, gradually progressing in complexity and emotion as this ‘tribe’ grows and learns. Electronic drum beats offer up new ideas and rhythms throughout that help keep the sound fresh, and the 6 minute running time gives the track space to explore other ideas that it wouldn’t have been able to otherwise. Vocals are also used in in their most extreme form on the record here, as excerpts rise up amongst piano-esque synths before dropping away into emptiness.

Embracing Chaos finishes the record nicely by asking the listener to “always put a question mark after the world ‘reality’. Its spacey psychedelic vibe continues with snatches of country/asian string and wind instruments ricocheting over the beat, allowing the track to breath and open up. A female voice talks of the universe, as it tries to keep the listener’s mind open and in a meditative state, before it gently twists and bends to different ideas and structures.

For lovers of spacey electronica, Occult Electric will have you breathing deeply amongst the the encrypted beats and airy synths. Its well-layered meanings and advice allow you to bliss out as Sound Strider manages to seamlessly break in new ideas amongst the organised chaos, allowing the listener to have a different experience after each listen. It’s well produced to create the maximum effect, and is credit to an artist that has honed his skills over the years in order to perfect the supernatural soundscapes created. Occult Electric is a blend of successful ideas that will bend your mind and relax your body.