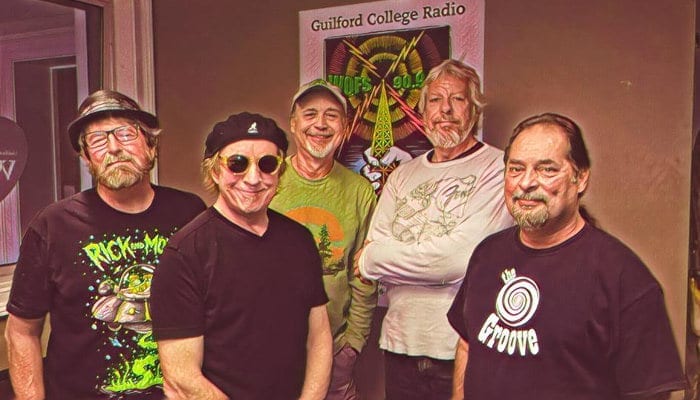 We take a listen to new record Jammin’ With Juma from Rich Lerner & The Groove, giving the listener a taste of jam-rock mixed with chilled out beats.

When you’ve been in a band for a while, you can struggle to differentiate yourself from your music. Sometimes it’s good look to new people and new ideas to help your music grow. That’s exactly what Rich Lerner & The Groove have done with new record Jammin’ With Juma, teaming up with former Jimi Hendrix percussionist Juma Sultan to create a record full of jams, chills and free form rock ‘n’ roll.

Hey Baby (New Rising Sun) opens the record. This rearranged Jimi Hendrix track features gentle guitar plucking against a psychedelic background. The guitar grooves, twists and turns, and although reminiscent of the great Jimi, it also takes on the signature sound of the band, with Juma Sultan keeping things tight and tailored on percussion and bongos. It’s a nice take on the track that really comes into its own in the chorus sections with some fantastic bass work dancing over the rhythm. 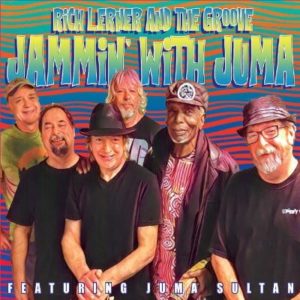 Seven Sunsets brings to the forefront a reggae/ska vibe as guitar enjoys itself soloing over the top. Once again, the bass sets the precedent with a melodic riff playing the track forwards. Gentle chorus backing vocals open the song up amongst flagrant sounds of the Caribbean and chilled out lyrics that make you feel like your lying on the beach with nothing to do but enjoy life. It’s a guarantee you’ll feel as relaxed as hell with a smile on your face after listening.

Be Here Now turns up the 70s rock vibe with a simple but effective beat and standard structure. Maybe not as intuitive as other tracks, it’s a pleasant break to turn off your mind and just rock out to repetitive rhythms and melodies. Ghosts Of Jimi then slows things down by reverting to phychadelica rock once again, with Lerner singing of “smoking guitars and rattlesnake drums”. It calls on the spirit of Hendrix to help out as it settles into a nice tribute, but maybe needing a little more bite.

Am I Grooving You saunters into the mix with a Mick Jagger swagger, spirited vocals and strong guitar work helping make it an album highlight. The guitar gradually moves the track forwards, dancing to its own beat and making it obvious the band had lots of fun recording this. As the song progresses they continuously find places to jump their own sounds to the forefront and hijack the track from their compatriots. There’s also a great guitar solo, and when mixed with Sultan’s bongos, the eastern vibe really gives it that gentle leg up.

Finishing with Sunset Dub, the slow and steady beat is drip-fed into your consciousness as instruments build up around a menacing beat. This is then gradually opened up amongst echoing samples and settled beats to provide a few interesting ideas that work well. It’s a nice way to end the record; not anything flashy but just a fine dub track done very well.

Jammin’ With Juna manages to open up the band to new horizons, whilst also allowing them to rely on their skills as musicians to bring the tracks out of their shells. Juma Sultan brings a new element to the recordings, and fits into the band seamlessly. Guitars whale when necessary, but also form a sturdy basis in other areas with some tight playing and interesting riffs. Rich Lerner & The Groove have created a strong record here that show off the band’s influences, but also has their own signature firmly in place.