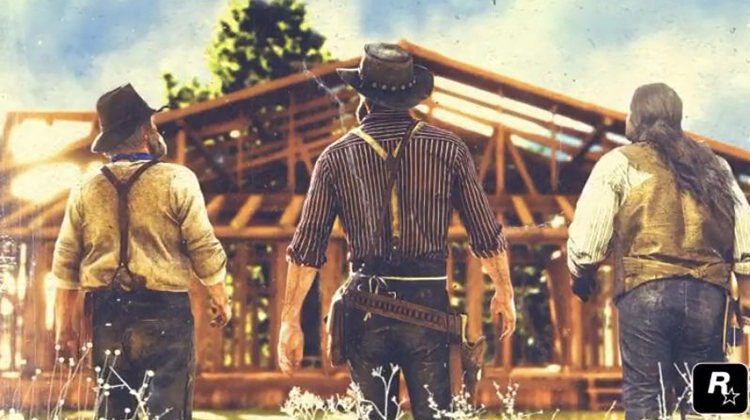 Another vinyl collab for all you gamers out there. Sold through a joint venture by Rockstar Games and Lakeshore Records, a new vinyl EP for the ever-popular video game series Red Dead Redemption is being released.

It’s a beautiful looking release with some stunning artwork of a housebuilding scene for which the EP is named after, with the vinyl itself showing off a lovely sky blue splatter reflecting the serenity in the artwork. It’s a 10” 33RPM LP which also adds to the collectivity and uniqueness of this piece.

Put together by David Ferguson and Mike Sweeney, the duo know their way around Western-inclined music. Ferguson is renowned for his work on previous Sturgill Simpson records whereas Sweeney, a guitarist and composer, has worked on previous albums from the late and great Johnny Cash, as well as Adele and Iggy Pop.

It will be interesting to see how the new tracks stand up to the wonderful The Housebuilding Song in offering a slice of Americana that makes anyone want to don a cowboy hat and jump onto a horse.

Rockstar Games have always been very closely associated with music. Tracing back to the early days of their video game franchise, Grand Theft Auto, players were able to hijack cars and tune into a myriad of radio stations in-game featuring hundreds of tracks and genres. Songs from these radio stations were frequently released physically. Red Dead Redemption has also had previous vinyl-based releases.

The Housebuilding EP will be available from 12th February 2021. You can preorder from both the Rockstar Wearhouse Website and Lakeshore Records.

You can check out the names of all five tracks from the EP below: