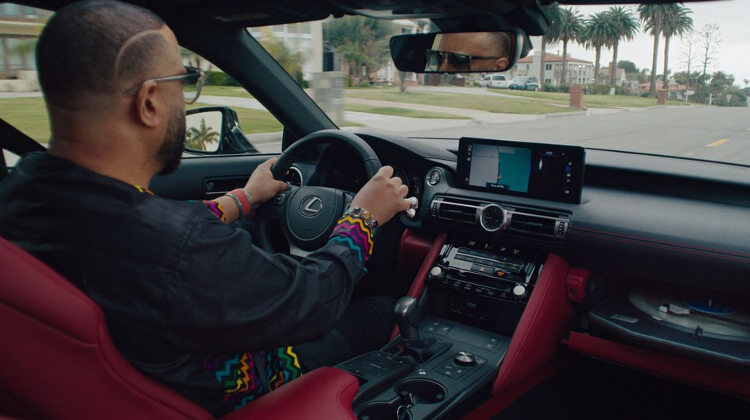 Fancy taking your records for a spin? And by spin, we mean on a car journey! That’s exactly what Lexus are demoing with their new concept car, the Lexus IS Wax Edition.

The car, very uniquely, has its own record player installed in the glovebox that is able to play music on the move without any skipping.

To show off the design and usability of the special turntable, LEXUS teamed up with DJ and producer Madlib and artist KAYTRANADA to create a new double-single that debuted on the car’s turntable as part of a two-part documentary series.

The in-car turntable itself is said to work flawlessly against the vehicle’s motion by the use of a rotating motor that jumps into action when the needle hits the groove. This helps stabilize the turntable and playback music without any skipping when you’re cruising along, listening to your favourite records.

The record player was created with a 3D printer and modified with aluminum and carbon fibre to complete the design. The concept car also features a Mark Levinson Premium Sound Audio System, 17 speakers, and surround sound listening capabilities.

You may be thinking what the point in this is, but like many concept cars, it’s a chance to show off, gain some publicity, and try out new and interesting ideas that might find their way into future car designs.

This isn’t the first time record players have been seen in cars. There’s a couple of semi-famous photos of both Muhammed Ali and George Harrison posing with what was labeled ‘The Highway HiFi’ record player installed in Chryslers back in the day, but these wouldn’t have had the stabilizing technology found on the new LEXUS defining.

We might not have flying cars yet but vinyl could be spinning in your car in the near future! Probably make sure you don’t try and change records whilst driving, though…

You can check out the two-part documentary about the new concept car over at the Pitchfork Website.