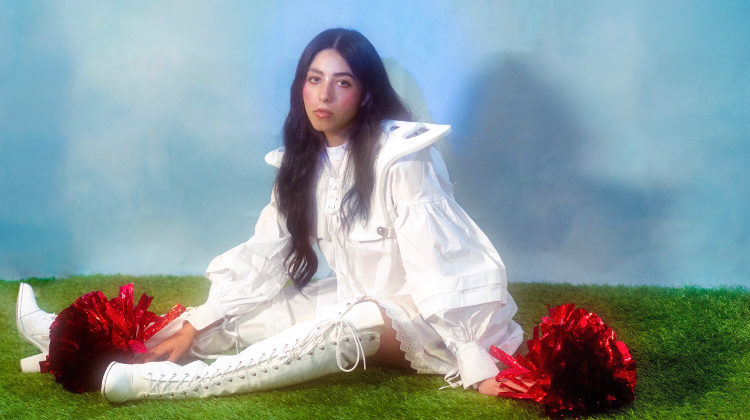 Pom Pom Squad have created a pulsating, ever-twisting debut of fuzzy guitars, insightful lyrics, and quieter moments with album, Death of a Cheerleader.

The impact of the pandemic and the ensuing isolation has had an effect on the entire music industry, none more so than for artists. For Pom Pom Squad, and especially frontperson Mia Berrin, it’s actually evolved their sound. During the pandemic Berrin found herself returning to classic jazz-styled artists such as Billie Holiday and Doris Day for inspiration, and some of this has seeped through into their new record, Death of a Cheerleader. Don’t worry though, there’s still plenty of fuzzy, energetic riffs and grungy loveliness that you may have enjoyed on previous EP, Ow, but the sound here feels fuller and more complete as Mia touches on topics such as her first queer heartbreak, self-separateness, and self-affirming power.

Starting with a short intro of dreamy bell-tones resembling the Mr. Sandman riff by the Chordettes (a delightful 50s throwback) were suddenly back in classic Pom Pom Squad territory with Head Cheerleader, a grungy, fuzzy-guitar laden riot that’s one of the most anthemic tracks on the record. It’s the band revelling in a sound they’re familiar with and the perfect, swaggering start as Berrin belts out: “my worst decisions are the ones I like best”. Crying follows with one of those as gentle strings build into a slow-burning sound that’s flavoured with a subtle dexterity amidst long, wandering vocal notes.

As the album moves onwards, you start to notice that shift in styles and structures that weren’t apparent in the band’s earlier work, showcasing more confidence to try different things and the influence lockdown has had over Berrin. Cake is brimming with confidence and guile against a fast-paced drum beat and settled layers but still keeping that punk mentality. Lux then goes full, fast-paced punk with Mia delving into areas of conflict and inner turmoil through delightful lyrical structures: “You push and I give way collapsing inward like a cave and I feel naked without taking off any of my clothes.”

As mentioned earlier, Mia had a chance to reflect on different genres and styles of music that start to trickle into the music in the latter half of the record. Forever’s swelling strings and gentle, contemplative vocals are reminiscent of Billie Holiday stylings, all building to a gentle and thoughtful chorus. This Couldn’t Happen floats back to that 1950s vibe once more with cooing backing vocals against ethereal movements and soundscapes.

These short and sweet intersections really manage to highlight the manic energy that feels like the main arteries of the record – a lifeline pumping through the band if you will. Shame Reactions has a hint of Arctic Monkeys brashness and virality about it with thrashing guitars and endless energy pushing the track forward whereas the band brings their own flavour to the much-covered but endlessly awesome Crimson and Clover, stamping their authority and showing off their uniqueness.

Death of a Cheerleader is a fine example of a band growing into their sound and knowing how to curate the structure of an entire album. Mia Berrin is the perfect frontperson, conducting proceedings lyrically and vocally and allowing the rest of the band to form intriguing flows and collisions of energy. This all counteracts perfectly with the quieter, dreamy-pop moments.