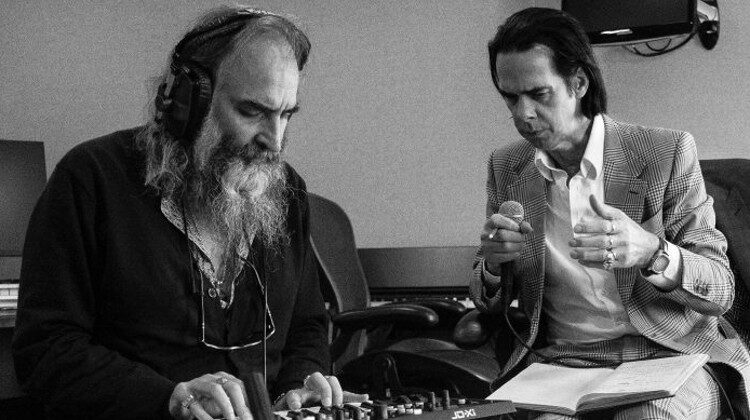 Shafts of light peer through darkness on Nick Cave and fellow Bad Seed Warren Ellis’s Lockdown album, Carnage, a recording steeped in both the turmoil of the pandemic and the singer’s classic themes of loss, redemption and apocalypse.

Nick Cave has spoken of how Lockdown has felt oddly familiar; the veteran singer-songwriter is well acquainted with isolation, loss and grief and his music has been permeated with the stuff for many decades. His teenage son’s death in 2015 directly inspired both 2016’s Skeleton Tree and 2019’s harrowing Ghosteen. The emotional weather of the pandemic would seem to fit Cave and his long-time foil, the gifted multi-instrumentalist Warren Ellis, like a hand in glove, though their new electro-torch song exploration of the devastation of loneliness and separation comes coated with spirit, tenderness and even hope.

Recorded at speed over a few days of frenetic and intense semi-improvisation, Carnage, their first non-soundtrack recording as a duo, ploughs the depths of our collective psyche and the strangeness of our current times on eight songs that exude as much menace as solace. The titular condition is not that of blood-laced brutality but a psychic type of desolation, a dark night of the soul illuminated by the licking of wounds and intimations of escape and oblivion.

Musically most of Carnage is sombre, subdued, even weightless, a tapestry of mournful piano, subtle guitar and parched, lovelorn vocals cocooned in a bed of eerie synths, sparse strings and disquieting backing vocals. As ever, Cave and Ellis make for a mesmerising pairing, with their disparate styles dovetailing to luminous and compelling effect; the latter’s shimmering loops and ethereal abstractions intersect gorgeously with Cave’s poetic sense of structure, cawing snarls and whisper-sing-song. Lyrically, these tunes are frequently, purposefully diffuse and scattergun, even when they’re starkly decorated by ravishing imagery (water crops up a lot), shifting and morphing between murmured stream-of-consciousness, glazed reverie and chamber-gloom hallucination.

Carnage is racked with episodes of sustained beauty and stricken with a fragile sense of mortality, contentment and attachment, swirling around Ellis’s spidery soundscapes. On the weepy, galactic Albuquerque, Cave ponders on frazzled quarantine nerves and cancelled plans whilst mulling over all the far-flung locations we won’t visit for now, forsaking the physical for the symbolic: “And we won’t get to anywhere, anytime this year, darling,” “unless I dream you there…unless you take me there.”

This and the equally affecting Lavender Fields, the swooning electronic haze of Shattered Ground and the gorgeous, choir-abetted Balcony Man, will be like manna from heaven for long-term devotees of the lofty likes of Love Letter and Into My Arms. The delicate Shattered Ground is particularly touching and tender, an elegaic exercise in empathy that’s bathed in noble washes of synth worthy of Brian Eno’s Apollo album: “Everywhere you are, I am/And everywhere you are, I will hold your hand again.”

Strangely, a couple of songs here deviate from the primacy of melodic texture and mood and feel rather incongruous and jarring, witness the lurching, potty-mouthed and ragged rock salvo of White Elephant, with its promise to “shoot you in the fuckin’ face for free,” and the leaden, grinding bluster of Old Time, but most of Carnage is as vivid and poised as any of Cave’s recent stock-taking. These flimsier distractions do nothing to swerve the listener from this album’s unassailable gravitas, pastoral chill and self-contained power.