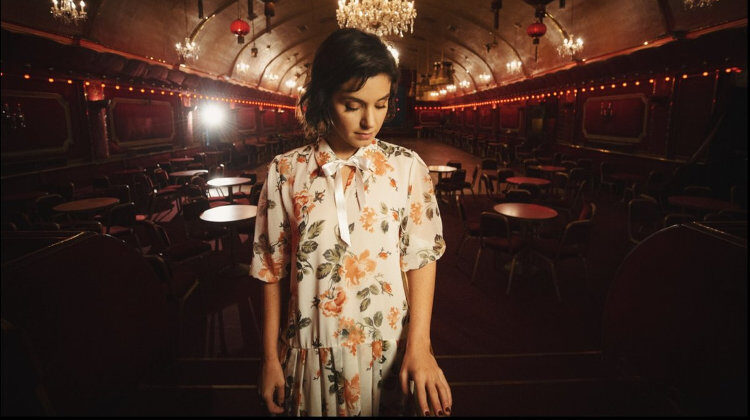 In these turbulent times, Katie Melua treats us to a mesmerising performance over a livestream using the historic Rivoli Ballroom as her venue of choice.

With her newest record, Album No.8, released in October of 2020 receiving high scores across the board, multi-platinum musician Katie Melua decided to finish off this torrid year with an online gig to say thank you to her fans.

The worldwide live stream concert was hosted from London’s historic Rivoli Ballroom; the perfect venue with its 50s decor and heightened acoustics to perfectly suit Melua’s style of laidback, folky-poppy-bluesy-jazz. Being streamed in conjunction with Driift – the company that also put on the fantastic live stream event of Laura Marling at Union Chapel earlier in the year- we were expecting the high-quality sound and camera work that we found at that event, and we were not to be disappointed.

Making the online audience wait a couple of minutes from its GMT 8 pm start, it gave a small nudge of nostalgia to standing in a crowded venue waiting for your favourite band to take to the stage. Melua and the band then faded in as we got our first glimpse of the wonderfully deepened red and gold surroundings of the Rivoli Ballroom as the socially distanced band settled in and Katie headed over to the solo microphone. With the singer wearing a sophisticated golden/orange slim gown, there was no welcome yet as we’re thrown straight into a trio of tracks from her newest record, Album No. 8, namely A Love Like That, English Manner, and Joy.

The sound was pretty phenomenal in this venue, happily highlighting the strong yet sincere vocals that Melua controls with skill and purpose, flowing seamlessly and bringing out her usual mix of beauty and transcendence in her songs. It all seemed so effortless, yet honed to perfection. Just like the previous Laura Marling live stream, the production quality and camera switches and movement are all choreographed well, highlighting both the venue and the musicians in the most satisfying way. The skill of live streaming events has come on leaps and bounds from the start of the year, and it really shows here.

After the opening trio of tracks, Katie moves to the other side of the ballroom away from the band for a small acoustic set. Starting with a beautiful rendition of fan favourite The Closest Thing to Crazy, the artist shows off her dexterity with guitar whilst performing the hit before moving onto Belfast (Penguins and Cats). Before long she returns to the band, but not before a dress change which allows the musicians to have a little jam session before Melua once again takes centre stage.

Focussing on more tracks from Album No 8 including the fantastic Maybe I Dreamt It and Voices of the Night, Melua then hits us with perhaps her most popular track in Nine Million Bicycles. The delicate wordplay and docile tones feel as if they were always meant to be performed in the Rivoli Ballroom, beautifully bouncing around the venue before being transmitted through our screens.

As the set nears its end we get another short interlude and dress change from Katie as well as a hypnotising cover of Black’s Wonderful Life that really hits home with style and grace. The live stream finishes with an impressive rendition of Album No. 8 closer, Remind Me Not To Forget.

With a set primarily featuring tracks from her latest record, fans may have wished for a few more of her classics, but it doesn’t really take away from the event due to the hypnotising quality and strength of the musicians. Melua’s stage presence is as focussed and professional as ever throughout, only taking a couple of small interludes to thank the audience for joining and paying homage to the musicians and production team involved.

In a turbulent year that many of us would like to forget, Katie Melua’s live stream from the Rivoli Ballroom is something to remember. She felt and looked perfectly at home in her first-ever global live stream that featured fantastic acoustics, strong musicianship, and high-quality production holding everything together. The silences between tracks were a little strange to get used to as the next song was prepared for, but it’s impossible to replicate the anticipation and shuffling of the crowd we enjoy at live venues. There is nothing really that can be done about this, but luckily Katie Melua thrived in her demure and stripped-back style that doesn’t concentrate on audience participation. All in all, it was a mesmerising event that shows how live stream gigs should be done.