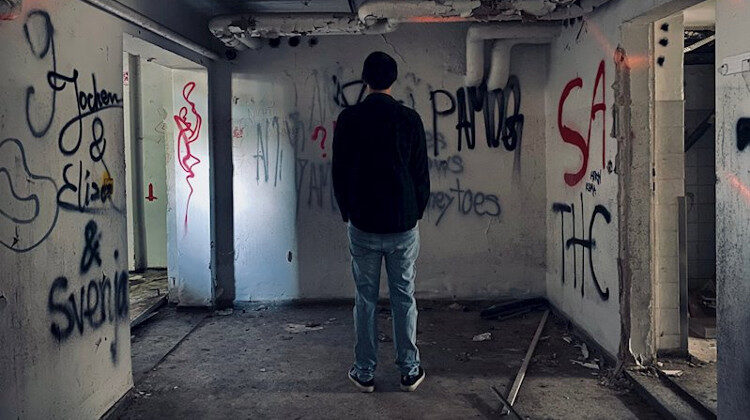 Alt-desktop doom artist K4LT (spoken “Kalt”, German for “cold”) really knows how to live and die by the sword. Content to create an almost new genre out of the odds and ends of others, his new, moody EP Endgame really encapsulates his unique style. Drawing on settled synths, doom metal, psych-rock and post-punk, the sound can be both exhilarating and exhaustive at the same time.

Starting with Boarding Pass, we’re straight away thrown into K4LT’s twisted world of commanding synths and dark yet addictive atmospheres that grab the attention. The track starts off slow and moody, the vocals gradually creeping in and extending into the ether with long tones as doom-laden bass holds it all together. Scratchy electro drum beats are then built around before hard-edged, fuzzy guitars are intermittently added and taken away quickly to awaken the mind.

Loading Screen perhaps calls to the electronic nature of music in a track littered with Pink Floyd-esque electronic flows on top of a settled guitar and an ominous state of mind. The ambiance builds before we’re suddenly hit with doom metal riffs and chunky, forboding fuzz that builds on the dark yet playful atmosphere. This transition might be a little jarring for some, but it’s what K4LT is all about, cutting and pasting his passions into music that speaks to him.

As the EP gradually builds, it feels that K4LT feels the need to try and focus a little more, even though there is still a penchant to change direction at the drop of a hat. Ahead // Back has perhaps one of the more serene flows the record has to offer, before kicking into settled beats and synthy buildups reminiscent of Gorillaz. Guitars once again rear their ugly head before once again being extinguished, seemingly a signature of the EP. Fugae treats us to a gently building intro before the raw power and fuzz of doom-laden guitars kicks in with industrial drums building menacingly. It’s an interesting track that feels a lot more experimental, perhaps K4LT trying to work through which kind of tracks would work together well on a full-length.

The EP ends with the introspective Extinction Aphelion. Steeped in a dreamy landscape of terror and malice, it builds towards a raucous conclusion with vocals seeping into your veins and psyche-laden rock flitting in and out against synthy ambiance.

K4LT has an intriguing and original sound that is experimented with throughout Endgame. It’s almost as if he’s coming to terms with what his music is capable of, and that’s exactly what an EP should be used for. There are sections that some may find a little jarring when moving from one genre to the next, but the sudden interjections of doom-filled guitars can actually help break up the tracks in a weird and wonderful way. It’s definitely an EP for those willing to experiment and one that will keep you guessing where it will go next.