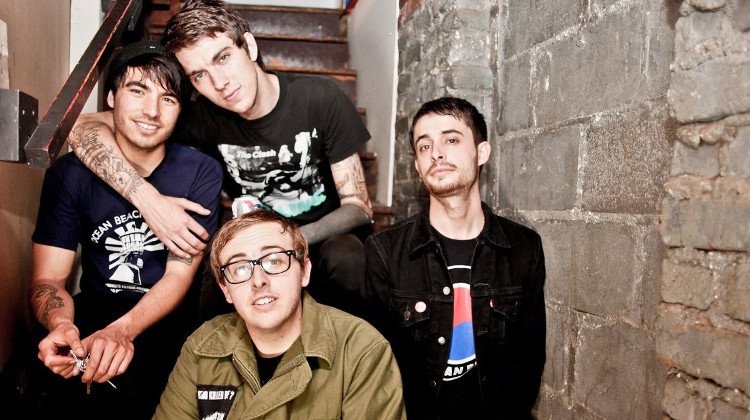 Hailing from Torrance, California and named after an apartment complex in the city, Joyce Manor clearly have an affinity for where they’ve been raised. Songs From Northern Torrance compiled early material – from their beginnings as an acoustic two-piece to the loud (which is an understatement) evolution to a four-piece. The tracks on the album have now become fan favourites and extremely rare, yet finally it can be heard by a wider audience.

The first five tracks come straight from their humble acoustic two-piece days. Although a low quality of recording, there is not a single loss of charm or teenage joy. Barry Johnson, on vocals and guitar, says that the opening track, House Warning Party, is “the first song [he] wrote specifically for Joyce Manor”. The track itself is a straightforward catchy punk tune, full of adolescent lyrics, igniting a feeling you have seldom felt since your formative years. One of the most endearing moments on Songs From Northern Torrance is heard on the fourth track, Danke Schoen, where there is a dialogue between the two members before and after the song – just two friends have the time of their lives making music. The entire first half is intimate, at times out of tune, but a beautiful snapshot of time.

When you flip to side B (theoretically for now as the vinyl isn’t out until mid-September) everything is cranked up ten notches. The magic still breathes, despite the addition of two members and electricity; however, the band seems to expand musically, unafraid to drift from the type of punk The Ramones made famous. Five Beer Plan, the eighth track on Songs From Northern Torrance showcases this best. Beginning with distorted-elongated notes and raspy vocals, it is almost Sabbath-esque, before developing into thrashy punk all within two minutes. Compared to the first half of the album, this side is masterfully recorded, resulting in a loss of intimacy; nonetheless, it remains indescribably joyous.

It’s unusual to see a 10-track album that’s only fifteen minutes long; however, this makes Songs From Northern Torrance absolutely perfect. A collection of work that could be listened to in three ways (as a whole or as only side A or B), Joyce Manor have somehow compiled a chunk of history that remains varied and captivating in such a short space of time. Pre-order the vinyl and secure yourself a gem of a time capsule.