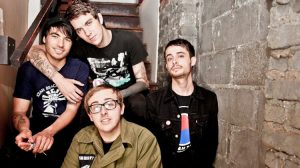 Californian four-piece, Joyce Manor, release a delightful compilation of rarities, with vastly contrasting halves. Hailing from Torrance, California and named after an apartment complex in the city, Joyce Manor clearly have an affinity for where they’ve been raised. Songs From Northern Torrance compiled early material – from their beginnings as an acoustic … END_OF_DOCUMENT_TOKEN_TO_BE_REPLACED