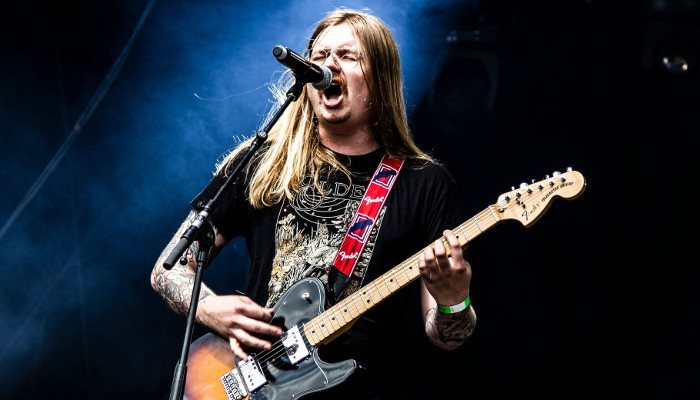 Vokonis is a band on the rise, fueled by their captivating new record, Grasping Time. We had a chance to chat with Guitarist / Vocalist Simon Ohlsson about the new record, lineup changes, and the future of the band.

Your latest album takes a different direction from previous Vokonis records, incorporating dual vocals and more complex song structures. Can you give us a little insight into how that direction came about?

I felt disinterest in the classic doom/stoner sounds we’ve been playing for two records. I’ve always been heavily influenced by bands such as Mastodon and Opeth. So a lot of it had to do with the actual ability to play stuff like that. We had gotten so much better over the years on our respective instruments that it felt only natural to try and explore other dynamics and sounds. Jonte’s got a great voice as well. So we decided to try and incorporate him more in the songs as well. In doing so we really opened up our sound. We have a whole new range of air and light with him on vocals.

What is your favorite track on Grasping Time, and why?

Personally, it might be Ashes/Embers, because it’s just a blast to play with all of the changes and dynamics in the song. It was also our first song to feature blast beats and that felt really weird at first. But it also came from a natural place.

Who handled the majority of the songwriting duties on this record, or was it a true collaboration?

I come up with hundreds of riffs and ideas, then we figured out how to put it together as a group. We always try to find a solution to the song as a unit. I have a vision with the music and I try to convey it to the band and if we’re lucky it transforms into something that we all can stand for. Writing is something of a creative outlet for me, so it’s only natural to try and get as much material out as possible. We currently have approximately two records worth of material on the cloud right now, haha!

Your former drummer Emil Larsson left the band after the recording of this record. How did that impact yourself and Jonte when the decision came down, and how well is new drummer Peter Ottoson fitting in with you guys?

It was a huge letdown, Emil was such a vital part of the band. In the end, he felt done with Vokonis and we respected his decision, but we were so sad about it. Vokonis had always been about the three of us, so it was a defining moment. I’m just relieved we could finish the album process together and get that as the end of that era. Peter came in as a suggestion from a mutual friend of the band and him. Peter wanted to really get out there and play, he felt the music we made up until that point resonated with him and he’s such a creative drummer himself. We already have recorded a new EP with him. I think it showcases the change in sound quite well.

The new record has clear influence from bands like Mastodon and Baroness. How important were bands like that to your development, and what other bands have you looked to for influence?

They have been with me for quite some time as a person but it was the first time I could look to them as true inspiration from a musical standpoint. So it was a blast for sure. We also looked heavily on bands like Elder and Pink Floyd. Seeing Elder for the first time was an eye-opening experience as I think they were bold enough to step out of the stoner/doom formula and do something different. So I’m forever grateful for their music and the impact it had on me at a crucial part of our career.

Speaking of the new record, I see that you guys are releasing several colour variants of the vinyl version. Are you excited that vinyl has had such a resurgence, and do you listen to vinyl yourself?

Vinyl is the ultimate way to enjoy music in my mind, simply because it demands something of the listener. We also had that in mind when recording the album. On a digital format it might seem weird to hear shorter tracks next to each other such as Exiled and Ashes… But on the vinyl that’s not the case, Exiled ends Side A and Ashes starts Side B. In short, I think it’s a more satisfying way to listen to records. And our vision with Grasping Time might come across as clearer on vinyl. In terms of vinyl I do collect and am saving up for a player. I’m the typical person that will buy 5 guitars and record a new album rather than getting a player… But in the end, I think that’s more beneficial for our fans anyway, haha!

The way we connect with our audience and the energy created is a wonderful thing. I like to connect with people and it’s always fun when people walk up to you and have a chat about anything. Especially when you’ve finished a set.

I think my favourite venue thus far has been The Underworld in London when we played Desertfest 2019. It was our first time playing in the UK, so it was very special.

What is your favorite song to play live, and why?

Antler Queen, the ability to just go out of the gates with a song like that is a great feeling. I just want to be able to get the audience to react straight away to us, and that track is a great way to get everyone going, from us in the band to the people in front. Also, I love playing that solo live, haha!

Are their plans to tour other parts of the world on this record?

We wanna go where people wanna see us. In the past, I’ve dealt with heavy anxiety, so travelling has been difficult. It’s getting better now so I really wanna start touring and get ourselves out there.

What is your vision for Vokonis going forward?

I think we want to just keep going down the path of progressive rock/metal and see where that takes us. We can implement any sub-genre we want in that. So it might be heavy, it might be light, but It’ll most certainly be fun!