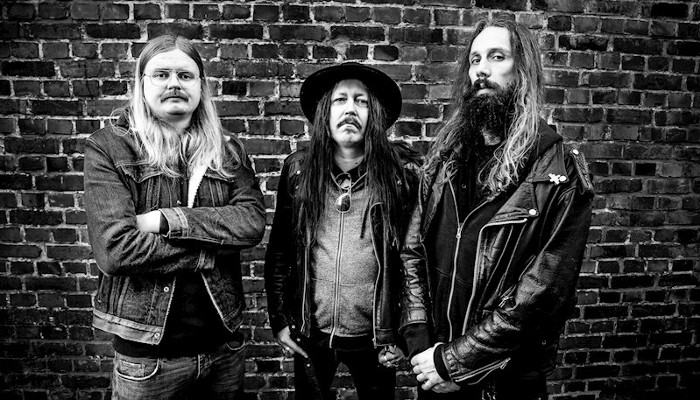 Vokonis has previously released two records, the 2016 album Olde One Ascending, and the 2017 offering The Sunken Djinn. When planning for the latest release, the band wanted to expand their horizons and introduce new elements to the sound. The evolution took them down a path of incorporating dual vocals in their songs and shooting for more complexity and diversity in the structure of the songs. “As we toyed around with the idea of sharing vocals we found out just how much more stuff Simon (Ohlsson) could do with the guitar,” commented Bassist/Vocalist Jonte Johansson. “Playing leads or more complex riffs while I’m singing was something we only dreamed of before.”  There was also a personnel change to deal with, as drummer Emil Larsson left the band after the completion of the record, and this marks his final contribution to the band. The new drummer, Peter Ottoson, has been welcomed into the fold and Ohlsson and Johansson are excited to work with him. With the release of Grasping Time, Vokonis has set out to deepen their sound and draw from their musical influences to take the band to a new level. 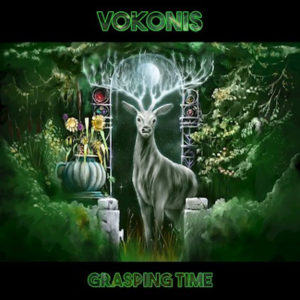 Antler Queen immediately rips in to start the record with a wave of heaviness and fantastic riffing. This is a melodic and well-constructed song, with aggressive yet melodic vocals. You can hear their Mastodon and Baroness influence during this song, and it is wonderfully dynamic. There is nothing about this song that I don’t like, and it is a great way to open the album.

Sunless Hymnal is up next and begins with a docile and comforting vibe. Clean and soaring vocals and musically bold, the song meanders through its nearly ten minutes with precision and is an early highlight of the record. The intensity picks up as the song progresses, and stellar musicianship is on full display. The last minute or so of the song features fuzzy, crushing guitars and a potent foundation from the rhythm section.

The first half of the release ends with the tracks I Hear The Siren and Exiled. It has an uptempo intro and fades to an ambient feel, and is very moody. This song has the potential to be a fan favorite during live performances, as proper lighting will accentuate how forceful the song is. Exiled is an instrumental that checks in at around two minutes in length, and begins with heavy, tribal beats. There is an extended guitar solo in this song, putting the chops of guitarist Simon Ohlsson on display.

The second half of the record kicks in with another instrumental, Ashes. Similar to Exiled, it is also a short track, checking in at around two minutes. This song has a technically strong intro with varied tempos. Embers follows up two short instrumentals with over 8 minutes of spirited and effective riffing. The dynamics are again a highlight of the song, and it is a well put together composition. The title track, Grasping Time, follows and is one of the strongest tunes on the album. It features open, ringing cymbals and tight guitar work that sets the tone for a captivating song. The dual vocals have a nice layering effect, and this one is a well-written song. Fading Lights brings the album to a close, and does a nice job of tying it all together.

Grasping Time is a record that you can immerse yourself in. They bring the heavy element to this record, but the added layering and melody in their sound makes for a very enjoyable listen. This is a release that you can go back to again and again, and hear a little something different each time. This is a good record, and with it, they have set themselves up for a nice rise. The evolution of Vokonis as a band is clear, and it is time to get on board and watch them take off.