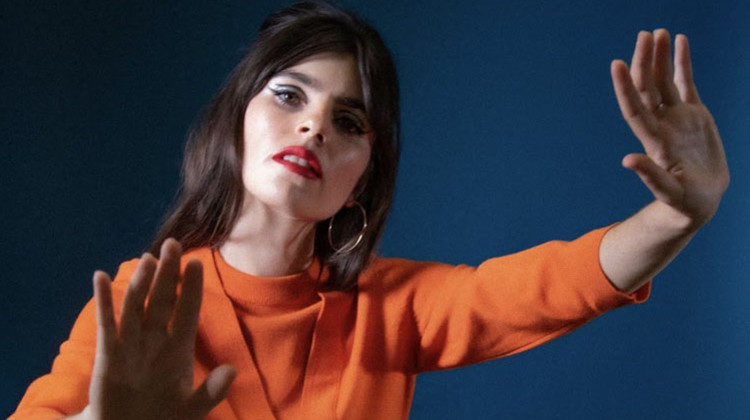 With debut records, many artists like to play it safe, but Hazel English knew exactly what she wanted and went for it with new album Wake UP!. Featuring a much grander soundscape than her earlier, more lo-fi bedroom produced EPs, this record has allowed her sound to grow into its natural state and offer up fine slices of dreamy, catchy soundscapes.

Born Like kicks off the record and we’re immediately introduced to the bigger and bolder sound. An opening of growing layers fades in and out quickly before a settled drumbeat sets the tone for English’s sultry, dreamy vocals to take hold and lead us forward. The track has a glitzy and warm appeal, reminiscent of Motown but using more up-to-date production techniques to make it stand out. The chorus really brings the track alive as jangling beach pop adds to the atmosphere and style. Previous single Shaking switches to a more indie-pop sound with clever little flourishes on drums and chorus changes that remind of late-era Beatles. The lyrics in the track are delightfully in control as English asserts her authority amongst airy breaths of innocence: ”Tell me that I am your queen, baby I’ll set you free, get down on your hands and needs, baby beg for me”

As the record progresses you can almost hear English getting more comfortable with tracks becoming more inventive and showingg off a presence we haven’t seen before. Off My Mind is a perfect slice of indie dream-pop that drives towards one of the most catchy choruses on the record. Five and Dime thrives in its slower pace and once again harks back to a Motown sound amongst wistful lyricism.

With the record wearing its heart on its sleeve, it definitely makes no effort to hide its influences, and this ultimately benefits the music. Like a Drug almost feels like its sampling The Zombies’ Time of the Season from the outset, but then mercilessly slides in its own floaty, versatile direction. Milk and Honey has the ever addictive bassline of Northern Soul and splices this with a guitar-driven chorus and stomping drum beat. The record finishes on the gentle and euphoric Work It Out that builds slowly into a simply-structured track, managing to say goodbye in an intriguingly ponderous way with the singer seemingly more vulnerable and open than at the start.

Wake UP! Is a strong debut from Hazel English with the artist using everything at her disposal to create a sound that suits her perfectly. The upscaling from previous work has been achieved seamlessly with the album feeling connected and balanced, benefiting immensely from the added input during its creation. The floaty Motown psychedelia that drives the record also features the perfect amount of pop atmosphere that really allows English’s vocals to come into their own. A fine debut that draws from the old but lives in the new.