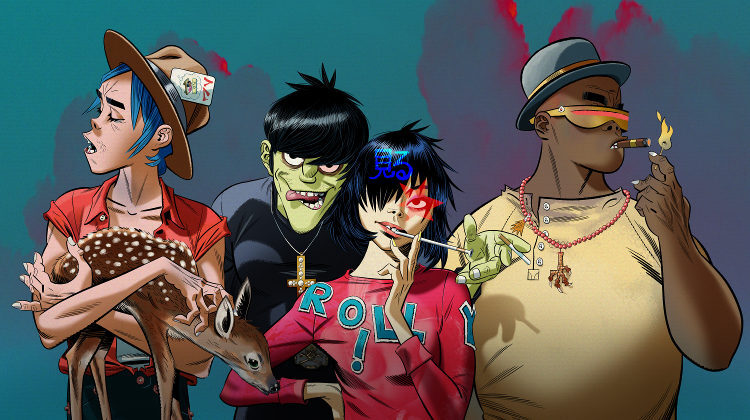 After 18 months, Gorillaz welcome London back to the world of live music and remind us how good it feels to be together again

I barely slept that night. August 11th had been furiously circled on my calendar and I had been praying this day would come for months. As I headed out towards the O2, I looked around at the people on the bus with me and wondered if anyone else was going too. 20,000 people – that’s a lot of people. More than I’d been around in almost two years.

After a thumbs up from Mr. Johnson, live events were finally back and the O2 Arena welcomed music lovers with open arms.

The second show of two (Tuesday’s gig had been a freebie as a ‘thank you’ for NHS workers), the cobwebs had already been blown out. The moment Damon Albarn, Seye Adelekan and Jeff Wootton appeared on stage, followed by the rest of the Gorillaz entourage, the crowd erupted, expelling 18 months of pent-up energy.

“Thousands of people communing together – what a wonderful feeling!” Damon Albarn exclaimed and was met with joyous cries in response. “I feel like we’ve come back so much stronger.” And he’s right. After so long spent separated, isolated and afraid, it’s incredible to watch as thousands of lights float in the darkness like fireflies; to hear this chorus of multi-faceted voices singing the words of your favourite songs at the top of their lungs; to be squashed between strangers, not worrying about masks, viruses, or social distancing for a few minutes, and have no choice but to jump together as a sea of bodies.

They played 31 tracks from across their discography and were joined by the largest host of guests I have ever seen; from frontman of The Cure’s Robert Smith who opened with Strange Timez, kitted out in a sequin bedazzled shirt and all too familiar makeup (at which point I could have died from excitement); shortly followed by Joy Division’s Peter Hook and his amped-up bass for Aries.

Malian singer-songwriter, Fatoumata Diawara, lent her sensuous vocals for Desolé, and a beautiful rendition of Hong Kong that reverberated around the arena and sent chills down my spine. And once artists like EARTHGANG came out for funk-injected dance track Opium; Little Simz exploded on Garage Palace; and Shaun Ryder and Rowetta covered the timeless fan favourite, Dare, there wasn’t a person left in their seat.

Albarn gave the crowd a taste of what’s in store for Gorillaz fans with sneak previews of two new songs. Of these, De Ja Vú was a eupeptic reggae anthem with a performance that paid tribute to Notting Hill Carnival – celebrating its 55th anniversary and cancelled for the second year in a row due to COVID – from the spirited sounds of the Mangrove Steel Band, to an onstage twerk from Alicai Harley, and a barrage of flags paraded around the stage with pride.

Whilst the night wasn’t without fault – they were late to show, AJ Tracey had bowed out due to illness and their final curtain call gave you the assumption that they still had one more in them before deserting the stage – it was undoubtedly a jubilant celebration of togetherness. Despite the odd face mask and the need for a COVID pass on entry, nothing has changed. I left riding a high and feeling hopeful, as if someone was finally restoring the balance of the universe.