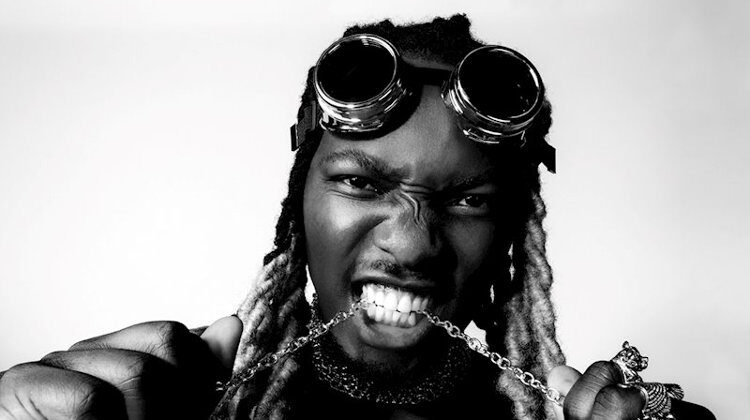 Afropunk/Hip Hop artist GNL Zamba unleashes a dizzying mix of ideas and infusions amongst a rap-rock underbelly on The Spear.

Describing his recent album as a conversation between Jimi Hendrix, Malcolm X, and Tupac amongst others is a big statement by GNL Zamba, but luckily he manages to live up to it. The Spear really is a cocktail of different ideas, but when the artist is in his element, he manages to pull the strings in a seductive way that will leave you enthralled and impressed.

Starting off with the beat-heavy Africa, from nowhere we’re suddenly thrown into a hard rock/hip hop hybrid with some electro thrown in for good measure. It’s an eye-opening start to the record as Zamba’s fast-paced vocals delve forward as he declares “Fist in the air for Africa!” amongst fuzzy guitars and stuttered electronics. It’s a love letter to Africa that hits home well.

Black Cesar follows, calling once again on the combined energy of rock and hip-hop, but this time enveloped in pop beats and a playful atmosphere. No Borders manages to switch it up slightly with a jazzy opening and drums that lead the track forward in a menacing way. The trumpets provide a settled infusion, working well against the walking bassline as Zamba builds the track through a constant stream of spitting lyrics, refusing to let up and give you a break.

As the record progresses, we really see and hear the diversity and genre-hopping that Zamba loves to bend to his will. Energy (Nrg) feels like a reggae-pop song direct from the early 90s whereas album-titled track The Spear draws on more African-heavy sounds to thicken out the synthy sound and allow Zamba to really bring out the intensity in his vocals. Even if you can’t understand what is being said, you still feel the mood that he is trying to portray.

With such a mix of genres, it can sometimes be difficult to find an ongoing theme in the record, but the artist seems most comfortable when he is combining hip hop and rock. He returns to this mix in the most powerful way on Who Got The Power as heavy drums and big guitars give the artist free rein to really let go with the vocals, declaring, “Who got the power, we got the power, you got the power.”

The record ends in a similar fashion with Zim Zim Bombo, featuring one of the best guitar riffs on the album. Sounding like it was taken straight out of a Black Keys songbook, it feels like a close cousin of the bands’ rock-influenced hip hop-rock side project Blac Roc, which is a compliment, indeed. It’s a hypnotising end to the record, signing off on a high and leaving you wanting more.

The Spear by GNL Zamba is an eclectic mix of genres, with its strongest points being when rock meets hip hop. Zamba has a penchant for finding addictive rhythms and riffs and searching out ways to place lyrics that others would miss. An intriguing record that leaves you thinking what else this artist has up his sleeve.