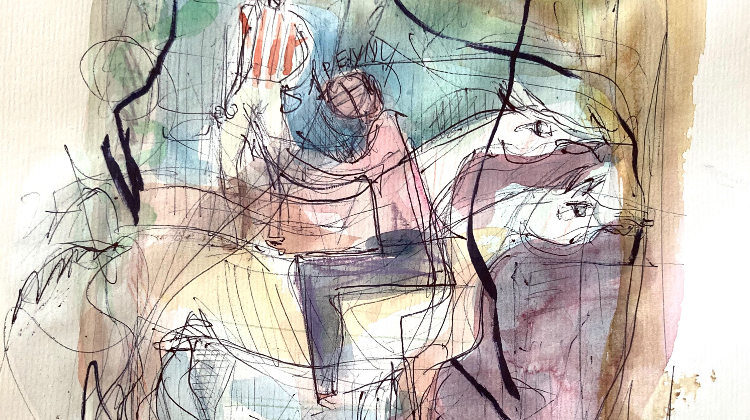 It’s been a difficult time for the entire world recently, that’s for sure. With so much going on, artists have a lot to write about through their music, with Elford, Davies and Baldini focussing on hard-hitting topics such as Covid, Brexit, and Politics through the album, The Real Story. There are also messages of love and endurance that help balance out the dark undertones.

Starting with a track named The End is Nigh might give you a few pre-judgments before the track even kicks in, but the sound is more powerful than the dark atmosphere promised, even if the lyrics are on the solemn side. Tailored guitars and a soulful rock sound remind of Paul Weller’s 90s music against the Manic Street Preachers’ clever swoops of lyricism and cynicism. The band is downbeat and rightfully so; it’s a torrid time and some artists just need to get it off their chests through song.

Cry of Despair follows with a more acoustic flavour that grows in stature, adding in playful electric guitar later on against layered vocals and a strong flow. Come Back Home has a more 70s rock vibe with a strong intro that unfortunately peters out a little and leaves you waiting for a more vibrant chorus. This minor issue is a rare occasion however and swiftly forgotten when listening to tracks such as Western Stretch with its rock ‘n’ roll swagger and beefer, fuzzy guitar sounds, or Take Back Control with its soulful exuberance and powerful messages.

It’s these contemporary and relatable political messages that flow through the record and show off the band’s views and ideas that many will relate to. It’s a difficult time for everyone at the moment and many tracks try to convey this atmosphere. An Hour Away uses big rock riffs to fill out a tainted love story that perhaps is influenced by the separation of loved ones during the pandemic, even if they’re only an hour away. The record ends with the pulsating After the Flood which tries to tie up all the difficult messages by looking to the future and the brighter days ahead.

The Real Story may get heavy in nature at times, but the overall messages are portrayed well amongst great guitar work, settled flows, and big energy when needed. The band plays well together and the tightness shows throughout, with lead singer Keith Elford showing passion for the subjects covered through his intense vocals. There are a couple of tracks that could be a little more polished to help bring out the sound, but the record is a sound of a band speaking up for what they believe in.