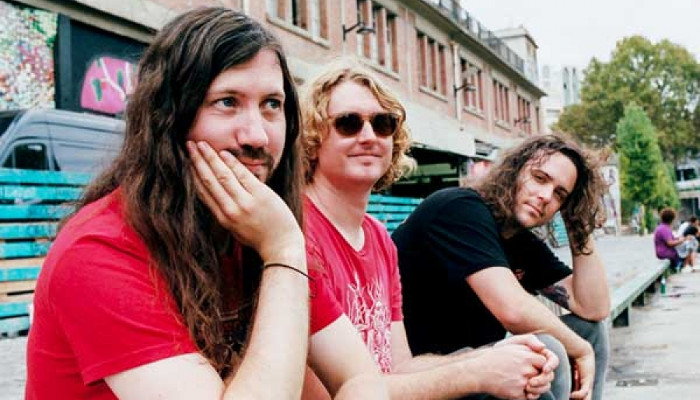 Most people would be forgiven for staying at home and catching an early night on a dreary October evening, yet everyone in and around the Underworld Camden was ready for a party tonight. From the time the doors opened at 7 pm, the alcohol was flowing – more of a continuation from the party upstairs in The Worlds End – and the two brilliant support acts (Planet and Wharves) kept the energy high among all. Once the Australian party punk trio of DZ Deathrays walked on stage and hit the first notes of Hi Everyone, the atmosphere hit its peak; a peak that didn’t lower until the lights went out.

With Positive Rising: Part 1 being out for only a month and a half, it was no shock that the setlist was flooded with songs from the new album (8 out of the 9 album tracks were performed). What was surprising was the interaction the crowd had with the new songs. There were few moments where people weren’t singing along, and there were people young and old getting involved in the pit – some even pogoing like it was 1977. After our review of Positive Rising: Part 1, it was amazing to hear the songs live, proving just how well they hold up when played alongside the bands back catalogue.

Though the set flowed brilliantly and has been clearly well-rehearsed, it would have been a lot better had there been more spontaneity. With a quick Google search, you can see there is little to no change in the set from gig to gig. Though this isn’t an issue if you’re only seeing the band once, seeing DZ Deathrays live is an experience that can easily become addictive, and to make each performance unique would greatly improve their shows – but also make the gig slightly more electrifying.

Despite this, the band themselves stood on stage like gods, but still felt one with the audience. There was a lot of back and forth between the band and those watching, mainly making comments on the heat of the venue and, despite being almost unbearable at times, it only added to the atmosphere. Those too cheap to use the cloakroom who suffered through the heat with their jackets on almost benefitted as there was more beer knocked out of hands than there were phones in the air; yet, if you do find a photo from the set, you are bound to see a photo of new member Lachlan Ewbank playing to the camera with stances like he’s in an 80s-thrash band – which after a while became tedious to watch.

Overall, if you ever get a chance to catch DZ Deathrays somewhere close to you, please do. Whether you are a fan of the band, or just want to have a party, good times were had all around. Looking around at the end of the gig, there were smiles all around, bruises on a few, and even those further from the stage were dripping with sweat.