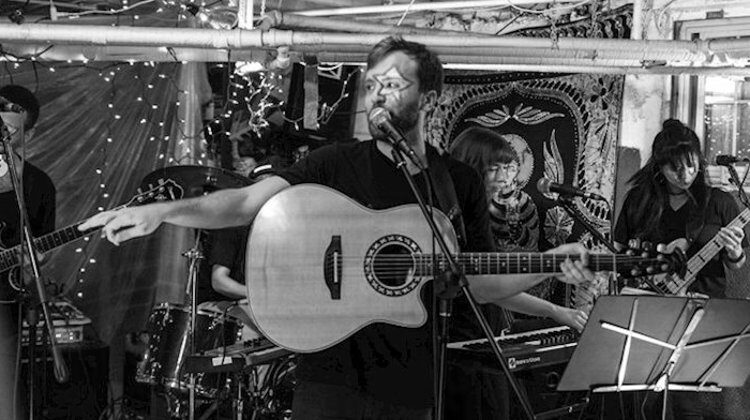 David Thompson presents a synth-laden, retro-futuristic sound that is intricate and upbeat on new EP, The Wall.

Philadelphia-based Electropop artist David Thompson knows a thing or two about synth-work. Working mainly with an 80s atmosphere but featuring up-to-date production, this allows the artist to mix the old and new in a unique way. New EP The Wall is testament to this, providing an insight to the artists mindset at the time of creating.

Ep-titled opener The Wall brings in a thumping, fast-paced beats, gentle synths and a bright electro-pop atmosphere. This comes accompanied with Thompson’s airy vocals that fit over the 80s indie-pop sound in an appealing manner, leading into a fun chorus. The almost video-game stylised synths are built with a little more courage, showing off Thompson’s penchant for an original catchy riff and intriguing hooks.

Time carries on with those synthy riffs before heading into more ‘80s fueled synth-pop akin to Depeche Mode in their heyday. The electrifying sound fades in and out amongst settled sections allowing Thompson’s vocals to materialise amongst the experimentation. It’s  dark at times, and although written before the covid outbreak, it seems to reflect the quasi-quarantine elements of the pandemic in a unique way.

As we head into the depths of the EP, This Goon Can’t takes a more settled approach for the first time, relying on a sweet melody amongst a bass-driven background. If you know the soundtrack to the movie Drive, there could be said to be comparisons in the quieter sections, but the track really comes into its own during the chorus.

Clair then takes a more acoustic approach, stepping away slightly from the synthy sound that proceeded for a more surf-pop, dreamwave track that bounces along on psychedelic tones. You would think this departure would be a little disruptive, but it just broadens the horizon that little bit more. The EP then ends on the enigmatic Obsession, with lyrics focussing seemingly on the social problems brought to us with technology that can isolate people as much as bring them together: “Whenever I want you, I type your name and we’re alone”. This is all wrapped around those ongoing futuristic synths once again, but this time featuring more of a live drumbeat which brings back a clever moment of reality.

The Wall is an EP littered with strong ideas and presented in such a way that it really makes the listener pay attention throughout. The synthwork is top-notch and Clair also manages to prove that David Thompson is proficient in atmospheres not just of the lectronic nature. With a strong overall identity it will be interesting to see where this artist will take us next on future releases.