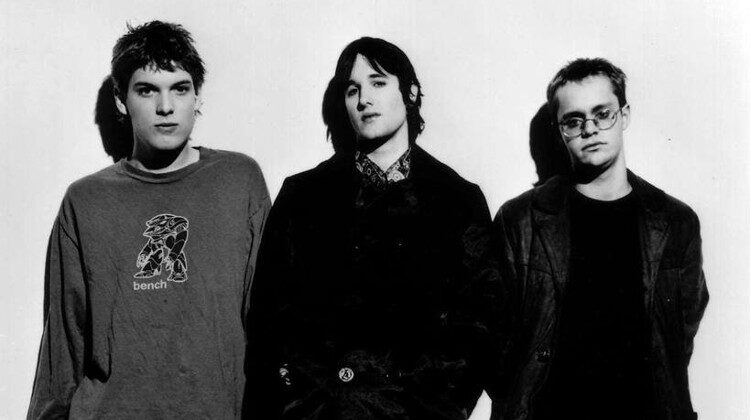 Ash treat their fans to a live and online playthrough of debut album 1977 as part of its 25th-anniversary celebrations.

It’s hard to believe that many of the beloved Britpop albums of the 90s are starting to turn 25 years old. We’ve already had Oasis’ What’s The Story Morning Glory, Pulp’s Different Class and Supergrass’s I Should Coco hit the milestone in 2020, and as 2021 has rolled in, we’ve hit a few more. Kula Shaker’s K, Suede’s Coming Up, Manic Streat Preacher’s Everything Must Go, and, of course, 1977 from Ash.

1977 was a blisteringly cool album and although often touted as a ‘Brit-pop’ record in the same vein as those in the above list, it feels more than that. At times it was louder and brasher. It calls on many different styles from grunge to rock to pop to punk, and they manage to mix this all into a brilliantly coherent and powerful record.

Lead singer and writer Tim Wheeler was only 19 when 1977 released. Ash were a young band full of big energy and eager to take the music industry by storm. The punk rock roots of their 1994 EP Trailer showed off this raw energy and although it was a big feature on 1977, the record also showcased a gentler pop-rock side with a few ballady tracks thrown in for good measure (albeit still with those lovely, fuzzy guitars). It was an album for kids coming of age by kids coming of age. It reached number one in the UK albums chart and sold 122,000 copies in its first week of release.

And so that brings us up to 2021 where Ash, namely Tim Wheeler, Rick McMurray, and Mark Hamilton, all a little older and a little wiser, have decided to celebrate 1977’s 25th anniversary with a special online and live performance of the record in full.

The Saviour of Online Gigs

With the pandemic changing the way many of us listen to music over the last year or so, these online gigs have become a lot more popular and important in celebrating milestones just like this. The boys in the band hadn’t seen each other for a while before this was recorded, but as mentioned in the included short documentary (more about that later), as soon as they got back together to practice for this gig, it felt like home.

Played in a venue provided by live streaming specialists, Stabal, it’s the perfect place for Ash to perform. Looking like a small garage, crowded and cramped with musical equipment, dim lighting and flashing strobes, it’s the sort of place you can imagine Ash practicing or performing in back in the day. At their hearts, they’re a garage rock/punk rock band and this plays up to where they are comfortable and what we expect from them. Don’t think there will be any sweeping camera angles of wardrobe changes like other recent online gigs such as Katie Melua live at The Rivoli Ballroom (fantastic for different reasons, so check it out if you can). This is a rock band having fun, and it’s exactly how their fans would want to see them.

So how was the performance? Quintessentially Ash. A rough and ready sound but played with precision and dexterity. There were no needless adaptions or thrills – perhaps an extended guitar solo or two and an extra drum flourish here and there – but it was exactly what it says on the tin – 1977 played through in full with all the guile and fervour of teenagers. Forget the fact they’re all in their early 40s now, they play and enjoy themselves like they were 20 years younger.

Opening with the fast-paced fan-favourite Lose Control (with Tie Fighter sound effects included) you immediately get that sense of raw energy and punk power that, for many, introduced them to the band. Tim Wheeler spits out the lyrics through the mike as he frantically strums his glittery Gretsch guitar as Rick McMurray (dressed in his current style of an American trucker) thrashes out the beats on the drums in equally manic fashion. Mark Hamilton strides his long limbs in the limited space he can find whilst strumming out the big bass lines. It all feels like home.

This is then followed by the singles duo of Goldfinger and Girl from Mars – two of their most popular and well-known tracks from the record. Both showcase Wheeler’s skill at songwriting, the former with its beautifully slow, grunge buildup and the latter’s poppy coming of age sentiments. It’s also apparent that Tim has lost none of his skill over the years, playing out difficult solo sections like they’re nothing and switching up sounds on the pedals with grace and ease.

We’re later hit with more feel-good breeziness on the beautifully arranged and instantly addictive Oh Yeah, pulling at the heartstrings and reminding of misspent youth and summers gone by. Kung Fu still kicks hard with its all-out pop-punk ferocity and Angel Interceptor backs up the band’s penchant for big choruses, big guitars and playful indie brashness. The set ends with album closer Darkside Lightside, one of the heavier tracks on the record that Ash play through with reckless aplomb, enjoying every minute of it.

The only track missing is the legendary hidden one (remember those?), Sick Party. It’s probably for the best as it’s just a track of a drunk, teenage Ash being sick everywhere after a presumably ‘heavy one’. I don’t think it would work so well for 40-year-olds during a live online gig to do this…

So, that’s the main course fully enjoyed and digested. But you still have the added bonuses to devour. As part of the live offer, you also get to listen back to the main album playthrough for the next 30 days, as well as the added extras highlighted below…

You didn’t think they were going to leave you with just the album tracks, did you? No! We get to see Ash play some extras.

First up is fan-favourite B-Side, Coasting, a delightfully catchy romp of fuzzy guitars and a huge chorus which also features on their upcoming BBC Sessions release for Record Store Day. We also get a playthrough of Goldfinger’s B-Side, Sneaker, a wonderfully grungy song that will satisfy Ash aficionados.

We then move onto the bonus tracks, deep cuts and obscurities, starting with American Devil. This was taken from the first Ash demo tape from 29 years ago, first played with Mark and Tim’s first band, Vietnam. The punk loveliness of T-Rex follows (B-Side to Oh Yeah) then a cover of Cardiff band Hell and Love’s Punk Boy. The bonus tracks end with another blast from the past in Silver Surfer, another cover from a band that Ash went to school with called Laser Gun Nun.

But that’s not all you get! There’s also a mini-documentary about Ash that lasts about 15 minutes. This features an interview with the guys, clips from the band in their youth all looking very ‘nineties’, stories about them hanging around with other bands such as Oasis, Weezer and Foo Fighters as well as a look at the making of 1977. It’s a great – if short and sweet – insight into the bands debut record and the times that went with it.

Overall, this live show was a great watch and listen. As live streaming and online gigs continue to grow in popularity, added benefits like all the extras here will start to become the norm; it’s a really nice touch for the fans. They don’t try and do anything fancy with the event as it’s not needed – Ash were and always will be a raw and chaotic band and this event shows off this side of them perfectly.