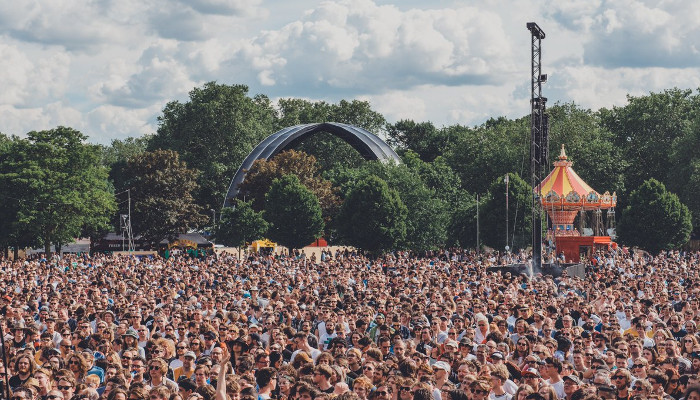 Victoria Park’s eclectic, two-week blockbuster summer festival, All Points East, opened for its second-year with a varied three-day programme encompassing the hedonism of Primal Scream, the block-rocking beats of The Chemical Brothers, the blissful astral psych of Spiritualized and the eagerly awaited comeback of The Strokes. Sunday’s itinerary proved the most attractive for me, though: Kurt Vile, Toro Y Moi, Ezra Collective, James Blake, Kamasi Washington, Andrew Weatherall and Beach House purveying a mixture of arthouse singer-songwriter, cosmic jazz, stoner psych and dream-pop.

On the North stage, the South London trailblazers, Ezra Collective, weaved an intoxicating spell of R’n’B, Afro-beat, grime, dub, jazz and hip-hop over a bewitching bedrock of frantic percussion. Part marching band, part soul troupe, they exhibited a palpably carefree, joyful and inclusive attitude towards genre and musical orthodoxy, as typified by their warmly received, wonky cover of Shanks and Bigfoot’s garage hit, Sweet Like Chocolate. Their approach to groove-based jazz was to treat it with a furious irreverence, interspersing full-tilt honking and blasting with passages of mellifluous serenity and creamy hooks rolling around beguiling, technically challenging harmonic changes. Drawing upon big band arrangements, old-school, Fela Kuti-inflected Afro-funk and sweaty urban styles, they agitated and mollified in equal measure.

The laconic Kurt Vile and his Violators entered the fray on the same stage with their irrepressible, low-slung alt-rock chug, liberally dipping into their latest record, Bottle It In. Slipping straight into the silvery guitar chops, mordant lyricism and sleep-talking drawl of Loading Zones, Vile and cohorts settled in their sun-sparkled territory, a savoury blend of country, folk, psychedelia and chunky rock conflating all notion of time and space. The rhythm section was taut, the harmonies were intricate, the freewheeling guitars were liquid lush and the Philadelphians’ hungover intonations shone through the PA with a dazed, baked and gruff glee. 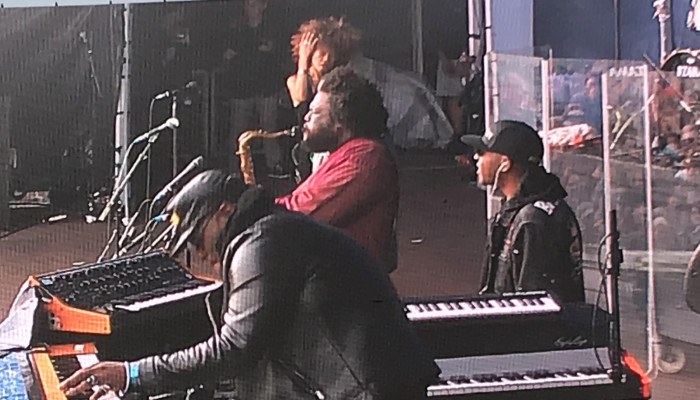 The ethereal Baltimore duo, Beach House, rifled through their impressive dream-pop catalogue in the dimly lit, packed West Stage tent and conjured a scintillating performance of hypnotic, tremulous psychedelia. Victoria Legrand anchored the band on murky vocals and angelic synthesisers, whilst Alex Scally teased out twinkling, sliding and rustling guitar lines and drummer James Barone propelled the mist of gauze with a muscular backbeat. Immersed in the band’s canny juxtaposition of splashing, swirling and starry visuals and otherworldly soundscapes you could feel the sounds piercing through your body, a divine experience of catharsis. From the autumnal Levitation to the stately sprawl of Used To Be, Beach House’s cinematic music exploded like a siren, draping ruminations on love and loss in synth swells, swan dives of breathy fuzz and star-gazing grandeur.

Back on the North stage, the imperious West Coast composer, saxophonist and bandleader Kamasi Washington, the figurehead of jazz’s latest new wave, commanded the crowd’s attention with a strident, dynamic and energetic performance. Kitted out in a crimson dashiki, Washington cut a striking, alluring figure as his septet captivated the audience with a thunderous take on the kung-fu theme, Fists of Fury. The vivacious, blues-rooted Patrice Quinn boldly, righteously spewed out the incensed lines, ”We will no longer ask for justice/Instead we will take our retribution/Our time as victims is over”, with a soaring urgency akin to that explored by Archie Shepp on his monumental 1970’s album, Attica Blues, whilst the double bassist Miles Mosley strummed, plucked and plundered with ceaseless invention. The two drummers, Tony Austin and Ronald Bruner Jr, thrashed out a monumental groove, keyboard wizard Cameron Graves darted between sultry 70’s P-Funk runs and expansive longeurs and the leader provided a tooting, honking and squealing presence whilst standing aside and appreciating each and every solo from his supremely gifted collaborators.

Washington is the antithesis of your conservative be-bop traditionalist, an invigorating, open-minded artist skilfully handling many strains of late 60’s and early 70’s black music but squeezing them through hip-hop’s filter and unfailingly building his epic tunes on fruity hooks. In distilling a Sun Ra/Miles Davis/John Coltrane sensibility to free jazz, R’n’B and funk, and incorporating song structures into peppy brass-blasting and rollicking Afro-futuristic exploration, his group exuded a breeziness and orchestral majesty that demonstrated inordinate versatility and supreme technical finesse.

Some years back, around the release of his acclaimed debut, I saw several James Blake performances and was struck by how brittle, polite and timid his stagecraft appeared. Once derided as a poster-boy for wispy sad-core, he has blossomed into a powerful artist of conspicuous self-assurance and unabashed euphoria.

Dressed in a patterned red short-sleeve shirt, a relaxed and affable Blake sat at his keyboard and delivered a series of quavering melodies, from the album’s serene title track to impassioned crowd-pleasers like Retrograde, Barefoot In The Park and the dubstep-crunching cover of Feist’s Limit To Your Love.

There is no doubt that Blake has reached not only personal contentment but an artistic level of progression where he can seamlessly weave between genres and hook up with kindred spirits as diverse as Andre 3000, Bon Iver, Travis Scott and Frank Ocean, all with a moody brio. Here he serenaded the enraptured crowds with a textured intricacy and a chill-inducing directness of expression. Wherever he takes his precision-tooled blend of contagiously opiated soul next, he certainly has an audience willing to follow him.