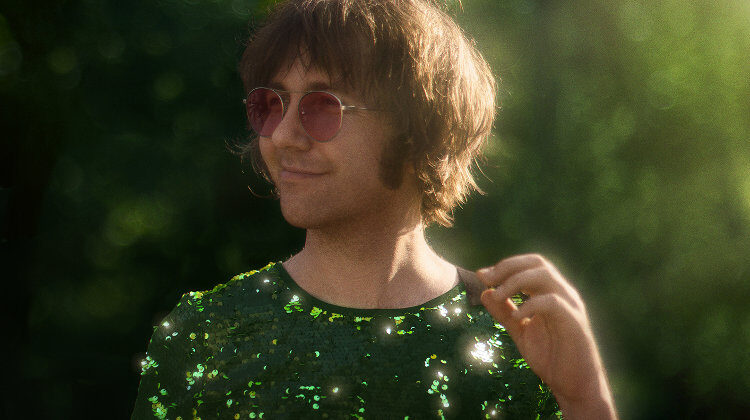 On his new, genre-blending record, the idiosyncratic and versatile classic-rock magpie Aaron Lee Tasjan meshes together acoustic and electronic sounds from different eras to conjure free-flowing, interstellar pop melodies with a tangy zest.

The music career of the thirty-four-year-old singer-songwriter and ex-glam rock guitarist Aaron Lee Tasjan has followed a crooked and convoluted trajectory, from Semi-Precious Weapons in the mid-2000s to Americana band, Everest, and a stint with the revamped New York Dolls. Previous solo efforts (In the Blazes, Silver Tears and Karma for Cheap) have dabbled with country-roots-rock, psychedelia and straight-laced AOR with mixed success; it’s as though he’s rifled through so many influences that his creations haven’t been fully grounded.

Tasjan! Tasjan! Tasjan! is the East Nashville artist‘s third outing on the label New West, and it finds him aping a plethora of classic rock stylings whilst embracing a greater balance of levity and gravity, grandiosity and intimacy. Whichever tousled style his muse lights upon, he exhibits a velvety touch with AM radio gold melody and a flair for off-kilter arrangement, fusing elements of vintage pop, indie-folk and glam-rock with a skill and an imagination that have become more refined over time.

The record kicks off with Sunday Women, a sunny slice of glittered-up, Big Star and Raspberries-indebted power-pop that’s wrapped up in the giddiness of a day-dream of a perfect partner. The amiable Don’t Overthink It and Another Lonely Day both possess distinct folk tinges, with the former boasting an eerie synth line and slaying the listener with earworm lyrics (“Don’t fall to pieces, see you in hell before it freezes”) whilst the latter comes on like a love child of Sufjan Stevens and Brian Eno. The languid Got What I Wanted, nods towards the 60’s/70’s cusp of Harry Nilsson and solo Macca or the crystalline piano ballads of Tobias Jesso Jr and the feathery melody of Dada Bois wallows in Brian Wilson-like chords of sun-lit wonder.

Elsewhere, Up All Night merges ELO and synth-washed disco to thrilling effect, Computer of Love serves up cosmic Americana that’s equal parts Elliott Smith and Tom Petty and the beguiling country-folk of Feminine Walk namechecks the androgyny of Bolan, Bowie, Jagger, Joan Jett and Grace Jones with a breezy infectiousness. The pretty and gossamer-like Not That Bad captivates with its ornate finger-picking and sanguine narrative of blissful denial: “I sent it to the label but I never got a call.”