Home » articles » A Guide To Buying Vinyl As A Christmas Gift 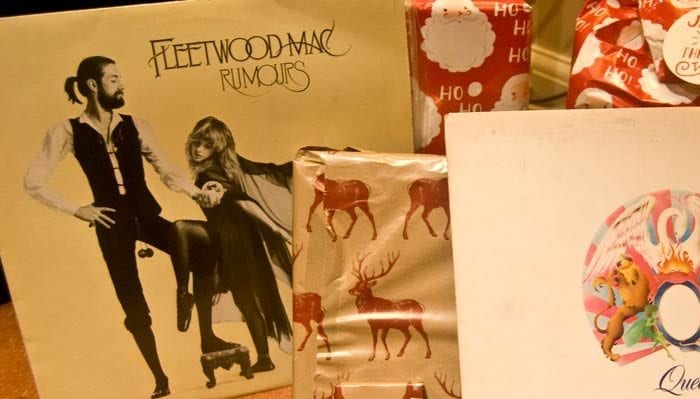 With the recent resurgence in vinyl, records are going to be on many people’s Christmas list this year. If you know someone who loves their records but don’t know where to begin when buying vinyl as a Christmas gift, this article is for you. This guide will make sure you get them exactly what they want, and earn you extra brownie points over the festive season!

The first thing to do is find out what records they want. You don’t want to buy something they don’t want, already have, or have never heard of. Obviously, they’ll be grateful you tried, but you’d rather get something they’ll like, right?

If you’re not worried about your gift being a surprise, just go up to them and ask! They’re likely to give you the names of a few records they want and you’ll be able to pick and choose which one.

If you want to go down the more dangerous route of surprising someone with a record for Christmas, then there are a few ways you can make sure you get something they want:

Those closest to them should know their musical tastes and what they would like, but don’t already own. They’re likely to be able to give you tips on what they want, and if it’s someone who lives with the person you’re buying for, they can take a sneaky look at their collection to see what type of music they’re into or anything missing from the collection that you can purchase.

This one is for people familiar with Amazon’s wish lists. If you go to the website, some people may have a wish list on there with, if it’s anything like mine, lots of stuff that you want but can’t afford to buy at the moment. To access it, all you have to do is go to the ‘search for a wish list’ option and type in the person’s name or email address. Hopefully, they’ll have a list with lots of records on, which will give you multiple options when buying vinyl for them.

If you’re good at covert operations, talk to them about music and find out what records they might want for Christmas without specifically asking them. One false step and they’ll be on to you though, so be careful!

Where To Buy Records

This section can be split into two: where to buy new records, and where to buy used records. The easiest option is to buy records new. That way you’re not risking getting them something that’s scratched to oblivion or in bad condition if you’re unfamiliar with the quality of records. On the other hand, if you’re buying for someone who wants a record that may not have had a new release for many years, you might have to buy used.

If you’re computer inclined, the easiest way is to buy through sites such as Amazon. They should have anything you’re looking for if it’s a new release or a pretty popular record that’s had multiple reissues. Delivered straight to your door, it’s no hassle, no fuss, and can even come gift-wrapped if you so desire.

Yep, that’s right, you can now buy new records as you do your food shopping. There’s not likely to be huge choice if any, but if you’re buying a classic album of some sort, you might want to check the music aisle next time you’re doing your food shop.

But, as always, it’s better to support the hard-working record stores out there and buy from them. Don’t be daunted going into these places if you don’t frequent them often; staff are generally very helpful and used to finding people who may be a little out of their depth around Christmas time. They’ll point you in the right direction as long as you have some idea of what you’re looking for. New records can be found in many record shops, as well as the used.

Don’t be too daunted if you have to buy used; it’s easy! Again, if you like to do Christmas shopping through your computer, the easiest way is to use a site such as Discogs. Discogs brings together record stores from all over the world into one website, where you can simply search for the record you’re looking for. The site will display options such as the price of the record from different sellers as well as the quality of the record you’re buying. You can then choose which one to buy. It’s very simple to use and has an astronomical choice of records.

It’s worth keeping an eye out for record fairs in your area, as you can find some real bargains and classic albums at these. Again, don’t be too daunted when buying vinyl and by the amount of record experts there; this is a good thing because they’ll be able to help you find what you need. It’s actually a fun experience and you can see the passion people have for records first-hand.

As previously mentioned, record shops, apart from maybe the big chains such as HMV, will sell a mix of old and new records. Have a little go at finding the record you’re after yourself amongst all the crates, and remember to have a little check for scratches or the quality of the sleeve before you buy. The staff will be able to help you if you have any questions.

If you take these pointers into consideration when buying vinyl for someone this Christmas, you’ll be the star of the yuletide season! And who knows, you might even start getting interested in records yourself…