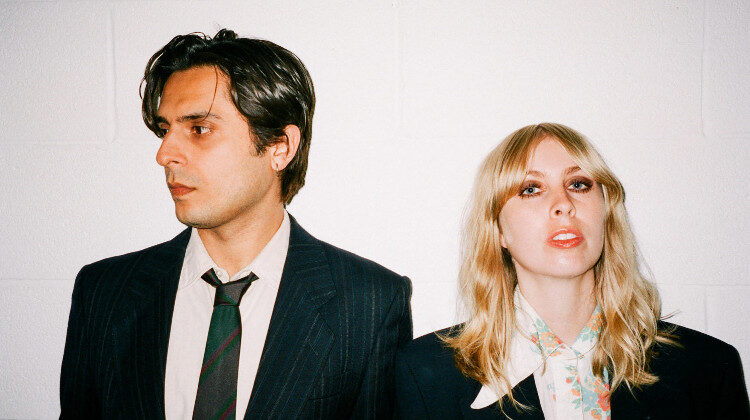 Wings of Desire show off a rebellious, energetic and Bowie-esque sound with their latest release, Amun-Ra.

James and Chloe – the duo behind the band – share a passion for iconic musical eras, spanning from Krautrock to Berlin-era Bowie. The pair used to spend many a night having intense debates on a multitude of cultural and humanitarian issues and from this,  Amun-Ra was born. This portrays their observations of life through intelligent lyrics and invigorating, but somehow tender, melodies.

Choose a Life, which was released earlier this year, is the opening track and by far the showstopper of the record. It’s wonderfully infectious, with James and Chloe’s spoke-sung vocals harmonising beautifully over the sounds of kinetic guitars and rolling drumbeats. The lyrics are refreshingly frank and thoughtful, addressing the constant quest in life to achieve the next big thing in the belief it will make us happy. The band explain the message behind the song is to “realise you don’t have to bend the world to make your mark.” This certainly comes through in the track’s delivery and the listening experience feels revitalising.

Better Late than Never follows on, a punchy indie-rock track featuring another catchy melody. With lyrics such as “success is a miracle nobody can reach” and “we’re just getting older”, it demonstrates the band’s ability to inoffensively bring a cynicism and tongue-in-cheek humour to their music. James sings the lyrics unaccompanied on this track, with Chloe’s vocals being absent until the latter half.

OUTTAMIND sounds like it came straight from the Factory Records, a label responsible for the likes of Joy Division, and one of the band’s heavy influences in their work. Whilst it’s a fun, upbeat and nostalgic track to listen to, there are parts that feel a little all too familiar to what’s been done before, making it lack a certain originality. Forgive and Forget completes the EP. It’s an example of an indie track that effortlessly strikes the balance between melancholic and joyful, with an extra textural layer added through airy synths and chimes. Chloe’s vocals take centre stage here, which complements the softness and sentimentality of the song.

Wings of Desire proudly show their love of the 80’s experimental rock era and an ability to address life’s complexities through memorable indie-rock tracks. There could be more depth to the construction of the songs that would amplify the band’s signature sound and it would have been good to hear more of James and Chloe’s vocals together, as they pair beautifully together. Nonetheless, Amun-Ra is a charming EP that is rich in thoughtful, unapologetic lyrics and an array of influences that shaped a generation.