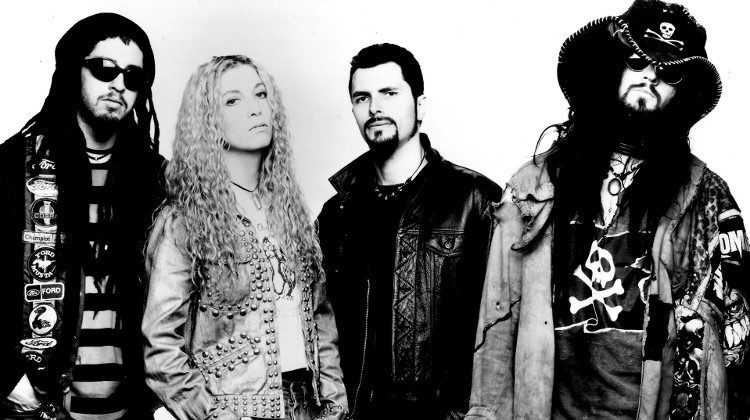 This month we look at the commercially and critically acclaimed Astro Creep: 2000 Songs of Love, Destruction And Other Synthetic Delusions of the Electric Head by White Zombie. The juggernaut of an LP turns 25 years old but ultimately proved to be the last for the industrial groove metal ‘B’ movie monsters.

Formed in New York in 1985, White Zombie were originally a Noise Rock Band. Founded by Rob Zombie and his then-girlfriend, bassist Sean Yseult.  Through ’85 to ’90, the band released two albums and went through various guitarists and drummers. After searching in vain for a major label contract, the band finally inked a deal with Geffen Records in 1991. The following year the band released their breakout release, La Sexorcisto: Devil Music Volume One. White Zombie’s sound now had a heavier metal feel thanks to the guitar chops of new guitarist Jay Yuenger or ‘J’ for short. The samples that the band had experimented with in previous releases gelled more with the groove metal. La Sexorcisto was deemed a success and spawned the hit singles Black Sunshine and the colossus that is Thunderkiss ’65.

Principle recording of the White Zombie follow up album began in 1994 at NRG Studios in Los Angeles. Produced by Terry Date, who had a Heavy Metal pedigree having already produced Pantera, Soundgarden & Deftones to name a few. Notable changes from the previous album, there was a personnel change behind the drum kit with the introduction of Mike Tempesta. Also, the guitars were now largely detuned down one and a half steps from standard E to low C sharp.

The album opens with the long sampled intro of the sublime hard-hitting Electric Head Part 1, your writer was fortunate enough to see White Zombie during the Astro Creep tour in which they opened with Electric Head Part 1 and the intro lasted for what felt like an eternity. The crowd exploded when J’s guitar finally kicked in… I digress.

The freakily awesome foursome throughout the LP perfectly blends low-end rhythms, heavily layered guitar tracks, seamless sample transitions and raspy growls from Rob Zombie that are hook-filled with catchy chorus lines you cannot help grunting along to. The tracks come thick and fast; Super Charger Heaven is a runaway train on fire, Real Solution No. 9 is a slower groove but is super heavy. Electric Head Part 2, the second single from the release, is a solid groove that would get any festival mosh pit or dancefloor moving to the hypnotic beat. Grease Paint and Monkey Brains and I, Zombie groove along at methodical pace, an organised chaos of sonic sounds that is mesmerising and infectious.

Now all senses are distorted and your grip on reality is warped and twisted, the industrial metal crew serve up the titan that is More Human than Human. The electronica intro is laid to waste by a killer distorted slide guitar riff delivered by the detuned guitar of J. It is the hook that binds and drives the song along. It feels like the crescendo to the album, a final boss battle that leaves you weary and weak. White Zombie now have you right where they want you. If More Human didn’t beat you into submission, El Phantasmo and the chicken-run Blast-O-Rama will finish you off. This sleeper in the final home stretch is the knockout blow.

The fourth album by the New Yorkers is an absolute triumph for not just the band, but for the resurging metal scene.  Ultimately, the band split in 1998 after a gruelling tour and schedule from the huge success of Astro Creep.  Rob Zombie continued making music very much in the vain of his old band. Proving he was the USP of White Zombie, why split royalties four ways when you can just have a band for hire. That is a very jaded view, but I doubt I’m far from the truth. But let’s not detract away from the fact that in their last hurrah, White Zombie created a monstrous album worthy of any of the horror movies they covet with so much love.