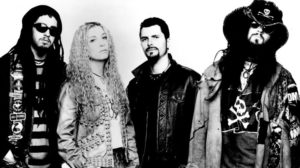 This month we look at the commercially and critically acclaimed Astro Creep: 2000 Songs of Love, Destruction And Other Synthetic Delusions of the Electric Head by White Zombie. The juggernaut of an LP turns 25 years old but ultimately proved to be the last for the industrial groove metal ‘B’ movie monsters.  Formed in New York in 1985, White Zombie were originally a Noise … END_OF_DOCUMENT_TOKEN_TO_BE_REPLACED