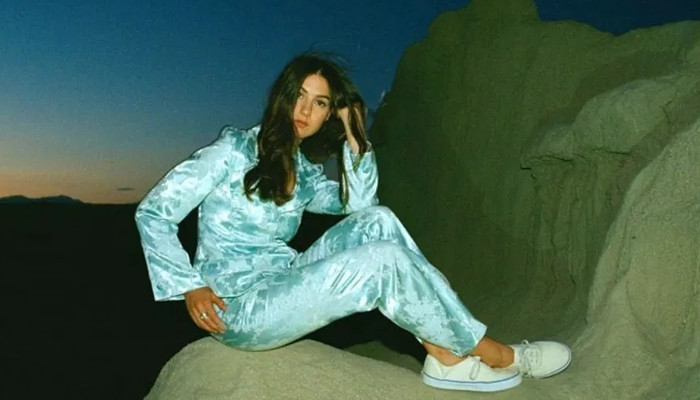 Natalie Mering aka Weyes Blood made a major breakthrough earlier this year with her fourth record, Titanic Rising, a swooning slab of melancholy FM radio pop peppered with unsettling themes and motifs, whose cultural metaphor of incipient terror beneath a façade of privilege seemed timely and urgent. Reviewers were quick to point out echoes of Karen Carpenter, Carole King, Joni Mitchell and Judee Sill in Mering’s wistful and butter-smooth delivery and her lushly orchestrated, mid-paced baroque ballads. However, Wednesday’s set in London showcased the craft, imagination and dexterity of a singular and original artist taking the hubris of humanity to task, filtering intimations of apocalypse and effortlessly transcending such comparisons.

Pristine and transfixing support was provided on the night by Ana Roxanne, a wispy, intersex Asian ambient composer whose meditative, drone-infused aquatics invoked comparisons with Julianna Barwick’s devotional and impressionistic soundscapes; her soothing, hushed and plaintive vocals grappled with the nature of memory and reality amidst a stream of gentle, gargling electro-shimmers.

The ecstatically received Titanic Rising is now garnering its second live airing in the UK this year and Weyes Blood’s soul-swaddling, lysergic make-over of 70’s West Coast singer-songwriter pop sounded even more ravishing, crystalline and assured at a sold-out Electric Brixton. Flanked by a pin-sharp four-piece band, a self-possessed and breezy Mering communicated jovially with the audience, asking how many believed that the moon landing was a Stanley Kubrick confection, “taking the temperature on the truth” and even throwing in an affecting curveball cover of Procol Harum’s A Whiter Shade of Pale.

Sauntering onto the artfully lit stage in a sleek white pantsuit, the mesmerising Mering radiated a palpable aura of inner calm and self-confidence, and the resounding power and clarity of her pipes suggested an irrepressible force of nature. This, and the flashes of melodic space dust sprinkled throughout, suggested transparent potential for wider popularity beyond the indie circles from which she sprang.

A Lot’s Gonna Change kicked off the evening’s proceedings with its succulent string swells and elegiac piano rolling beneath her nostalgic longing for a “time when I was just a girl/When I had the whole world gently wrapped around me/And no good thing could be taken away”. The themes of connection, disillusionment and anxiety were pursued on the lovely Wild Time, adorned by impressive keyboard work by Walter Clements: ”Everyone’s broken now/And no one knows just how/We could have/All gotten so far/From truth”. Elsewhere, the perky piano-pop bounce of Everyday raised the roof with its ascending chords, gorgeously winsome melody and frazzled coda, whilst a blissful acoustic version of Picture Me Gone was arresting and beguiling.

Mering reserved the spectacular double blast of Andromeda and Movies for the dazzling denouement before the encore: the former was glistening, expansive and wreathed by woozy slide guitar whilst the arpeggiated synthesisers of the latter were jaw-dropping and transcendent, like grandiose dopamine floods.

Weyes Blood sent her adoring throng of fans out into the chill of a winter night with a gargantuan performance: her grain of voice, elegant songcraft and propensity for wafting electronics make it impossible not to succumb to her charms.