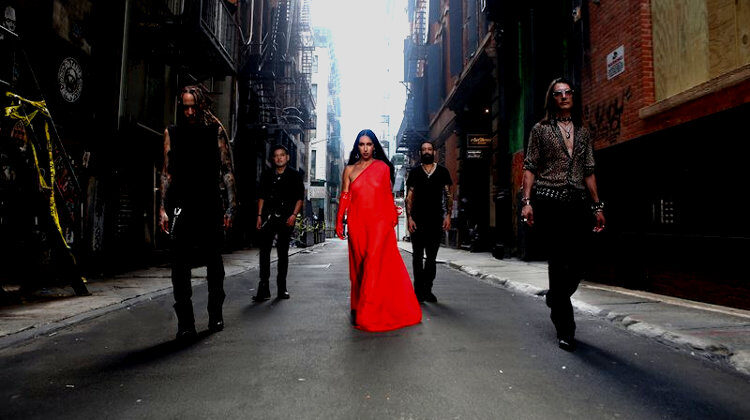 In dark times, some people call for dark music to help them get through to the other side. New EP Irkalla not only provides solace for listeners looking for big riffs and heavy choruses but also combines this with a more settled and ambient backdrop. Although remaining on the dark side, the EP can offer a pleasing escape as you sit back and wait for the next big-hitting wall of sound.

Starting off with EP-titled Irkalla, we’re gently caressed into the music with settled piano against creepy underlayers that build slowly and menacingly. It’s more of a settled and short opener to prepare us for the chaos that is about to ensue. Maya is where we get our first taste of prog-heavy riffage, slowly building over-energetic drums and singer Annamaria Pinna’s dextrous vocals that build to a chorus that hits hard between the eyes. It’s the kind of wake-up call you need and a release of consciousness that much of the world is in need of right now.

Crown or Crucify begins in a ballad-laden fashion before quickly building on alt-rock drums and clever-riffing to completely warp the sound and make it much more menacing. The track then slowly builds back up before once again hitting us with a big and bold chorus. This technique is used throughout the EP, and although not original, does the trick to bring out the raw explosions of darkness before once again settling back down.

Wavering follows as a creepy interlude, full of whispering, ghost-like vocals and haunting footsteps that put you on edge and in anticipation of the last two tracks on the EP; this is where things get interesting. Sever the Tie has a wonderfully playful intro of world music influence before once again hitting you from nowhere with big guitars and belting vocals. This contrast works really well and makes for a nice change from the formula. The EP then ends on Wind, building from elements of psyche-rock and feeling like a Mayan hallucinogenic dream with layered chanting and bongo-style drumming. You feel like you’re being dragged into a mystical land before you hear a completely out of the blue dial-tone and the track ends, throwing back into reality.

Irkalla is an interesting EP from Vajra, not content to just settle on the heavy alt-metal sound, especially in the later tracks. This is where the music comes alive and we see a different side to the band as they combine their heavy choruses and riff-driven layers against other more therapeutic and hypnotising ideas. It’s an EP of contrasts that mostly works well.