Two Door Cinema Club returns with their fourth studio album, False Alarm managing to produce some catchy and danceable beats, but not maintain the pace.

If you aren’t familiar with them, Two Door Cinema Club is a Northern Irish three-piece indie rock band with three full-length records already under their belts. They released their debut, Tourist History, in 2010 followed up by Beacon in 2012 and Gameshow in 2016. They return this year with their latest release, False Alarm.

The first track on the record, Once, was an interesting choice for the opener. It’s a pretty generic sounding song, and comes across as a bit uninspired. It isn’t a bad track but would have been better suited near the middle of the record, as it didn’t set a strong tone for the rest of the album, lacking in charisma.

Up next is Talk, and this one probably should have been the opening track. Very listenable, with great flow and hit potential. It will likely become a crowd favorite at their live performances, as it has plenty of spots for audience interaction and a driving, danceable beat. Vocalist Alex Trimble effectively delivers the lyrics over a solid composition. 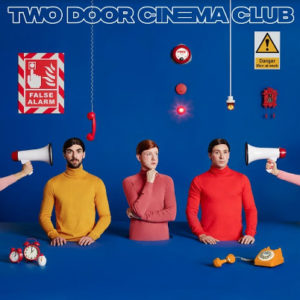 Satisfaction Guaranteed kicks in with a very nice 80’s synth-pop opening. Again, Trimble’s vocals are very solid and fits the music nicely. It’s another song with hit potential and should keep the club crowds moving. The dreamy sounding breakdown is a nice addition to the feel of the track.

So Many People begins with a Kevin Parker (Tame Impala) sounding synthesizer intro. The song quickly transitions, however, to a funky guitar riff and a radio-friendly verse. It isn’t the best offering on the album and doesn’t have much personality, but it is a listenable track with a calming outro.

Side one of the record ends with Think, which is the strongest track on the album so far. Very good song structure, reminiscent of Arctic Monkeys at times. This is a smooth song that winds up the first side nicely and includes an atmospheric outro that is a nice direction for the band.

Flipping the record over to side two, and the first song that you’ll hear is Nice to See You. This is the longest track on the record, but it doesn’t need to be. The intro is promising, featuring a catchy riff similar to something from electro-pop project Big Data. After that, it loses its way and feeling. The rap verse featuring Open Mike Eagle is unnecessary and sounds gimmicky. Open Mike Eagle’s performance is fine, it just doesn’t seem to fit in very well. It’s a 6:13 song that could have been wrapped up in about 4 minutes.

Break is the next track on side two, and it features a synth tone reminiscent of Paul McCartney’s Wonderful Christmastime. There isn’t much musical depth to the song, but it’s a fine filler track for the record.  Dirty Air follows, being a very well written song and the highlight of side two. It is one of the better tracks on the record, and sure to be fun listened to live. With hints of Fitz and the Tantrums and great energy, it’s very catchy and a good listen.

Satellite is next, and it isn’t offering anything that we haven’t heard earlier on the record. Again, not a bad track but it has a generic feel and lacks personality. A few times in you’ll think that it’s going somewhere different, but it stalls. It had the potential to be better.

The final track on the record is Already Gone featuring a strong intro that builds up to a soaring chorus. Similar to Talk, this will likely be a huge favorite for their audiences with plenty of opportunity for crowd interaction. It’s a good choice to close out the record and a good direction for the band.

Overall, False Alarm is a solid record and it is refreshing to see a band take risks and not stick to the formula. Fans of Two Door Cinema Club will buy this record and enjoy it, and the band will play packed shows to excited festival audiences. There are some highs and lows on the album and some moments that will leave you wanting more.