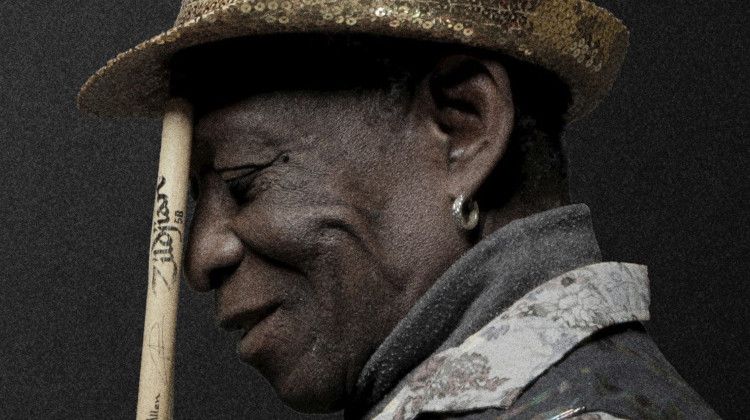 Tony Allen was a shapeshifting legend who supplied Afro-beat with its polyrhythmic verve and grace. Michael Sumsion pays tribute to the musical powerhouse who has died in Paris at the age of 79.

The world of music has just felt another jolt, another sad loss. Tony Allen was more than just a drummer; he was a force of nature who helped lay the groundwork for a whole genre of music and inspired countless artists over successive generations, a man whom Brian Eno described as “perhaps the greatest drummer who has ever lived”.

Born in Lagos, Nigeria in 1940, the young Allen was self-taught on drums, fired by the influence of the jazz legends Max Roach and Art Blakey. Having served time in a variety of highlife bands, he soon caught the attention of outlaw, bandleader, multi-instrumentalist and activist Fela Kuti, whom he served for twenty years as the fluid backbeat and musical director for his great Africa 70 outfit and helped invent the musical style of Afrobeat: a syncopated and electrifying hybrid fusing American big band jazz, call and response and James Brown-styled funk with traditional Ghanaian highlife and Yoruban polyrhythms. The gilded, canonical and totemic 1970’s music they produced together over almost forty albums was particularly powerful and will surely stand the test of time: No Agreement, Zombie, Gentleman, Shakara, Roforofo Fight, Expensive Shit, Water No Get Enemy and so on. Allen was a dervish at the kit and a revolutionary, laying the muscular and thrilling building blocks for Fela’s loose-limbed, thunderous and progressive anthems, a life-affirming, slippery and anchoring cog in a naggingly insistent, interlocking groove machine.

Allen possessed a highly distinctive style of drumming that was instantly recognisable as soon as you heard it; this unsung hero was adept at using his whole body, laying down intricate and complex polyrhythms with all four limbs. The majesty of the Africa 70 signature sound – soaring horn fanfares, buoyant and hypnotic guitars and incendiary, often wry lyrics chanted over a driving, formidable and sweaty groove – owed a massive debt to Allen’s trance-like drumming. As diligent as he was gifted, he was known to play drums for six hours without taking a break.

Creative and curious throughout his career, Tony Allen settled in London and then Paris, forging a series of fresh musical relationships after splitting from the band in 1979, including work with Sebastian Tellier (that’s his inimitable sinuous syncopation on the French singer’s unforgettable La Ritournelle), Air, Flea, Jarvis Cocker, Charlotte Gainsbourg,  Africanism All Stars and famously with Damon Albarn, Paul Simenon and Simon Tong under the alias of The Good, the Bad & the Queen. In 2008, he formed the supergroup Rocket Juice and the Moon with Albarn and Flea. He continued to collaborate and perform up to the time of his passing, performing with Africa Express, recording an album with the Moritz Von Oswald Trio and working on an EP with techno legend Jeff Mills as well as birthing a solo project in 2017 on the Blue Note label, The Source. Meanwhile, a film celebrating his life, Birth of Afrobeat, was released to critical acclaim last year. Allen’s final project, Rejoice, was issued just last month, the result of years of sessions from a long-gestating project with the late South African trumpeter Hugh Masekela. Unanimously described as a humble, simple and sensitive man, his sad passing marks the end of an era and a sound whose spirit, soul and athleticism will reverberate for as long as people listen to music.