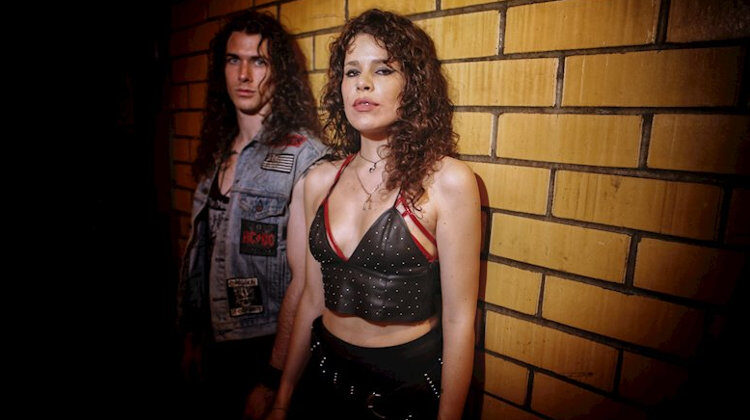 The Straddlerz hit us with their loud, brash, dirty rock ‘n’ roll on their pulsating and steamrolling self-titled debut.

There’s something mesmerizing about listening to a band when you know they’re having fun. Duo Linda and Michael form the backbone of The Straddlerz, and that’s exactly what you hear when you listen to their music, pure, unadulterated fun. With some high-quality guitar work and equally impressive vocals, their debut is loud, proud, and makes no excuses.

Starting with No Changes, this is a good track to introduce us to the sound and swagger of the duo. Straight away we’re hit with heavy rock guitar riffs from Michael, big drums, and huge vocals from Linda. It all leads to a pulsating, enigmatic chorus where the guitar somehow lets loose even more as the listener becomes mesmerised by the skill and speed that the track moves onwards.

With an opener like that, you know there’s going to be no let up so you might as well just strap in and enjoy the ride. Previously released track Streets of Love carries on the big energy and fuzzy hard rock sound, this time leading into a catchy chorus of malice and sordidness. “What are you fighting for, take me back to the streets of love”, wails Linda before a big and brash guitar solo plays against the powerful drum track.

Circle of Insanity makes you think you have a little bit of space to breath, before kicking in more maliciously and fast-paced than before, featuring perhaps the best vocals on the record. We do, however, finally get a little downtime with the bluesy, settled pace of Don’t Go Away. Linda’s vocals show their sensuality in this quieter atmosphere, allowing them to really take the track in the directions she enjoys, instead of the song taking her for the ride. It shows the quality of the quieter moments and perhaps leaves you wanting a few more of these throughout the record.

As we get to the end you feel the band are benefiting from a little more freedom. Without You uses reverb on the vocals to great effect, bringing out raw energy that grabs onto the heavy metal tones. Album-closer Junky Bastard ties everything together nicely with, once again, Michael bringing out his immense guitar skills to the table. The vocal manipulation also works well to create something slightly different to finish on.

The Straddlerz debut record is a rollicking journey of chaos and intensity, all pulled together by tight guitar work, raucous vocals and a powerful rock energy. The duo fit each other well and it feels like they know exactly what the other is going to do before they do it. Another more serene track or two could help bind the album together a little bit more and allow Linda to show off her vocals, but apart from that, it’s a damn good all-out rock record.